WASHINGTON — The scenes have been disturbingly familiar to CIA analysts accustomed to monitoring scenes of societal unraveling abroad: the massing of protesters, the ensuing crackdowns and the awkwardly staged displays of strength by a leader determined to project authority.

In interviews and posts on social media in recent days, current and former U.S. intelligence officials have expressed dismay at the similarity between events at home and the signs of decline or democratic regression they were trained to detect in other countries.

“I’ve seen this kind of violence,” said Gail Helt, a former CIA analyst responsible for tracking developments in China and Southeast Asia. “This is what autocrats do. This is what happens in countries before a collapse. It really does unnerve me.”

Helt, now a professor at King University in Tennessee, said the images of unrest in U.S. cities, combined with President Donald Trump’s incendiary statements, echo clashes she covered over a dozen years at the CIA tracking developments in China, Malaysia and elsewhere.

Marc Polymeropoulos, who formerly ran CIA operations in Europe and Asia, was among several former agency officials who recoiled at images of Trump hoisting a Bible in front of St. John’s Episcopal Church after authorities fired rubber bullets and tear gas to clear the president’s path of protesters.

“It reminded me of what I reported on for years in the Third World,” Polymeropoulos said on Twitter. Referring to the despotic leaders of Iraq, Syria and Libya, he said: “Saddam. Bashar. Qaddafi. They all did this.”

The impression Trump created was only reinforced by others in the administration. Defense Secretary Mark Esper urged governors to “dominate the battlespace” surrounding protesters as if describing U.S. cities as a foreign war zone. Later, as military helicopters hovered menacingly over protesters, Gen. Mark Milley, chairman of the Joint Chiefs of Staff, toured the streets of the nation’s capital in his battle fatigue uniform. 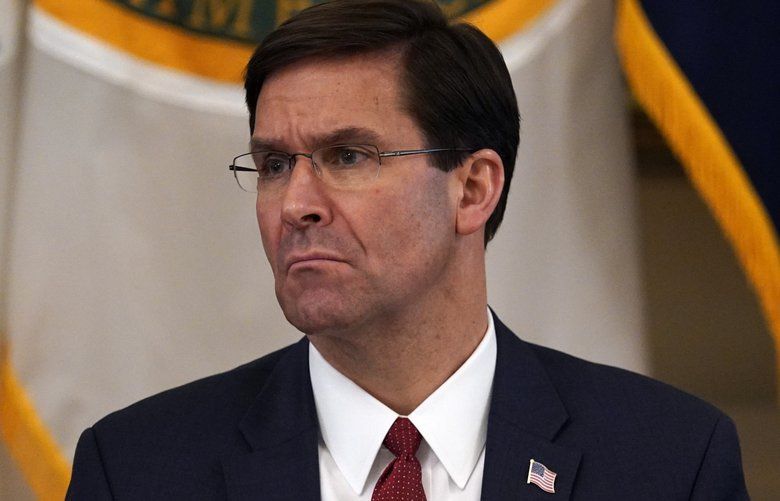 “As a former CIA officer, I know this playbook,” Rep. Abigail Spanberger, D-Va., said in a tweet. Before her election to Congress last year, she worked at the agency on issues including terrorism and nuclear proliferation.

One U.S. intelligence official even ventured into downtown Washington on Monday evening, as if taking measure of the street-level mood in a foreign country.

“Things escalated quickly,” said the official, who spoke on the condition of anonymity, citing the sensitive nature of his job. He emphasized that he went as a concerned citizen, not in any official capacity. After seeing tear gas canisters underfoot, he said he “knew it was time to go” and departed.

Former intelligence officials said the unrest and the administration’s militaristic response are among many measures of decay they would flag if writing assessments about the United States for another country’s intelligence service.

They cited the country’s struggle to contain the coronavirus, the president’s attempt to pressure Ukraine for political favors, his attacks on the news media and the increasingly polarized political climate as other signs of dysfunction.

Trump supporters have defended his handling of the unrest, and his trip across Lafayette Square as a display of the strength needed to restore order in dozens of cities where protests have led to looting, fires and violence.

Former Wisconsin Gov. Scott Walker, a Republican, said it was “hard to imagine” any other president “having the guts to walk out of the White House like this.”

But there were also indications that senior members of the administration were uncomfortable with the president’s outing and eager to minimize their role in it.

A senior Pentagon official said Tuesday that neither Esper nor Milley knew when they set out to accompany Trump that police were about to charge through seemingly docile protesters or that they would find themselves playing supporting roles in a photo op.

Even away from the cameras, Trump has assiduously cultivated the aura of a strongman. Earlier Monday, he had chided governors as “weak” for failing to employ adequate force in the face of mounting protests.

“If you don’t dominate, you’re wasting your time,” Trump said. He offered no words on how to ease tensions in crowds that have massed largely in anger over the death of George Floyd, an African American man who was killed while being pinned to the ground, a knee against his neck, by police in Minneapolis.

Brett McGurk, a former top U.S. envoy to the Middle East who spent two years in the Trump administration, said the president’s words — recorded by participants and shared with news organizations — would only embolden the world’s autocrats and undermine U.S. authority.

“The imagery of a head of state in a call with other governing officials saying ‘dominate the streets, dominate the battlespace’ — these are iconic images that will define America for some time,” said McGurk, who led U.S. diplomatic efforts to counter the Islamic State terrorist group. “It makes it much more difficult for us to distinguish ourselves from other countries we are trying to contest” or influence, he said.

In recent years, U.S. officials have urged restraint or denounced crackdowns against protesters or vulnerable groups in Russia, Iran, Turkey, Malaysia, Syria and other countries.

Even this week, Secretary of State Mike Pompeo lectured China about its efforts to prevent citizens of Hong Kong from holding a vigil to mark the anniversary of the Tiananmen Square protests.

“If there is any doubt about Beijing’s intent, it is to deny Hong Kongers a voice and a choice,” Pompeo said in a statement that was met with derision on Twitter because it coincided with Trump-urged crackdowns in the United States.

The seeming hypocrisy in the U.S. position has not been lost on foreign targets of American pressure or criticism.

Ramzan Kadyrov, a Chechen leader previously sanctioned by the United States for alleged human rights abuses, said Tuesday that he was “watching with horror the situation in the United States, where the authorities are maliciously violating ordinary citizens’ rights,” according to reports from Moscow.

The Washington Post’s Julie Tate contributed to this report.