Republican politicians showered the truckers, who descended on the Canadian capital, with praise. Copycat convoys gathered from New Zealand to France.

But even as the vocal group of truckers known as the “Freedom Convoy” grabbed the world’s attention, many of Canada’s truck drivers were scrambling to distance themselves from the movement, which they view as radical and fringe.

In their view, the protesters’ actions — including shutting down cross-border trade and laying siege to the capital — have hurt rather than helped drivers in the industry, and failed to advance the labor issues most truckers care about. They point out that only a small percentage of Canadian truckers have joined the demonstrations, and the vast majority of drivers are already vaccinated, according to trucking associations and Canadian authorities. 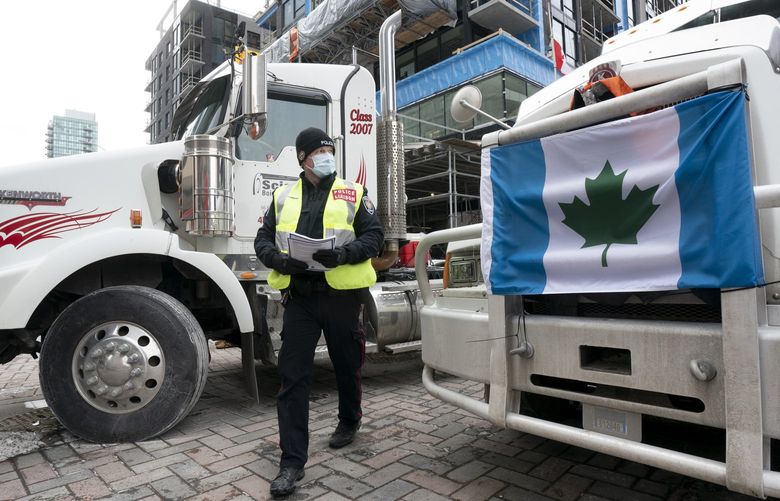 There is a vocal minority, which is trying to steal the headlines, but a silent majority has actually been working day and night.”
— Manan Gupta, publisher of a Canadian magazine for South Asian truckers

“There is a vocal minority, which is trying to steal the headlines, but a silent majority has actually been working day and night,” said Manan Gupta, publisher of Road Today, a Canadian magazine for South Asian truckers. About a third of Canada’s roughly 180,000 tractor-trailer drivers are immigrants, according to the most recent survey, in 2016.

The protests have caused long delays at the border and forced drivers to take lengthy detours. Such disruptions are “not received well” by truckers who are not participating in the convoy, Gupta said, adding that “they are the ones keeping our supply chain intact and running.”

“These illegal blockades have had a detrimental impact on our members and customers’ businesses. These have also had a very significant negative impact upon our professional driving community,” the president of the Canadian Trucking Alliance, Stephen Laskowski, said in a statement Monday.

The roadblocks hampered trade with the United States and forced American auto companies to scale back production, prompting the White House to call last week for the swift reopening of transportation routes.

Canadian police cleared the blockade of the Ambassador Bridge, a vital border crossing linking Detroit to Windsor, Ontario, on Sunday night. And on Monday, Canadian Prime Minister Justin Trudeau invoked the country’s Emergencies Act, which grants the government sweeping powers to respond to national emergencies. The Canadian Trucking Alliance came out in support of the move.

Some of the convoy’s most visible leaders aren’t even truckers. And at the demonstrations, Confederate flags and pro-Trump signs have mingled alongside the Canadian maple leaf emblem. Money has also poured in from donors in the United States.

James Bauder is one prominent figure and leader of the fringe group Canada Unity, which is well known for peddling conspiracy theories. Action4Canada, which sent vehicles and members to join the convoy, also promotes on its website the unfounded claim that Bill Gates wants to use the vaccine to implant microchips in humans.

They are using our name in the wrong place and the wrong time. It’s not a trucker convoy anymore.”
— Ajay Singh Toor, spokesman for Canada’s West Coast Trucking Association

“They are using our name in the wrong place and the wrong time,” said Ajay Singh Toor, spokesman for Canada’s West Coast Trucking Association. “It’s not a trucker convoy anymore.”

As a result, the convoy’s demands run the gamut from the removal of all public health measures to Trudeau’s ouster. Teamsters Canada, a union that represents 15,000 long-haul truck drivers, called the convoy a “despicable display of hate lead by the political Right and shamefully encouraged by elected conservative politicians.”

The movement “does not reflect the values of Teamsters Canada, nor the vast majority of our members, and in fact has served to delegitimize the real concerns of most truck drivers today,” the union said in a statement last week.

Issues such as wage theft, bad roads and a lack of restrooms are far more pressing issues for most truckers than vaccine mandates, trucking associations say. But convoy protesters haven’t raised them.

Manbir Bharj drives a crane truck in Ontario and says that the vaccine mandates imposed by the U.S. and Canadian governments on truckers were “fair” because they helped mitigate the spread of the virus.

“This is why the virus is spreading and mutating into different variants — because people don’t know how to follow” rules, Bharj said.

Some worry that the damage to the industry may be hard to reverse. The convoy threatens to exacerbate a labor shortage that already plagued Canadian trucking before the coronavirus hit, Gupta said. About 23,000 truck driver jobs need to be filled, according to a January report by Trucking HR Canada.

“These protests, these blockages, they’re not creating a positive workplace for anybody who wants to embrace trucking,” Gupta said.

Matthew Marchand is a tanker-trailer driver from Ottawa who transports liquid bulk chemicals between Canada and the United States. He is vaccinated but wasn’t fully supportive of the mandate, which he said didn’t really give truckers a “true choice.”

“But how [the protesters] are going about it, to me, is not acceptable,” he said. “The negative reputation that they’ve created for us isn’t going to do us any favors with the public’s perception of our industry. We already have a hard enough time as it is.”

Driver Ted McNeill told CityNews Toronto last week that he had to take a five-hour detour to deliver a truckload of food into Canada.

He had a similar message for the protesting truckers: “Stop it. You’re making us look bad.”

The Washington Post’s Miriam Berger and Amanda Coletta in Ottawa contributed to this report.