OTTAWA, Ontario (AP) — Canada’s public safety minister said Monday that U.S. officials should stay out of his country’s domestic affairs, joining other Canadian leaders in pushing back against prominent Republicans who offered support for the protests of COVID-19 restrictions that have besieged downtown Ottawa for more than a week.

A day after the city declared a state of emergency, the mayor pleaded for almost 2,000 extra police officers to help quell the raucous nightly demonstrations staged by the so-called Freedom Truck Convoy, which has used hundreds of parked trucks to paralyze the Canadian capital’s business district. The protests have also infuriated people who live around downtown, including neighborhoods near Parliament Hill, the seat of the federal government.

“Individuals are trying to blockade our economy, our democracy, and our fellow citizens’ daily lives,” Prime Minister Justin Trudeau said in an emergency debate in Parliament, while the protest continued outside. “It has to stop.”

Trudeau said everyone is tired of COVID-19 but this is not the way. He said the restrictions won’t last forever and noted that Canada has one of the highest vaccination rates in the world. “Canadians trust science,” Trudeau said.

“A few people shouting and waving swastikas does not define who Canadians are.” 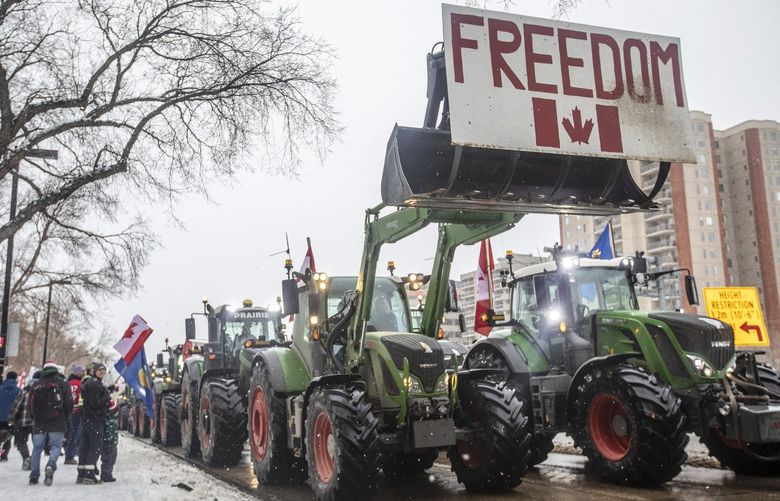 Protests unfolded elsewhere too. A truck-convoy protest near the Ambassador Bridge, the busiest border crossing between Canada and the U.S., caused long traffic backups along the span from the Detroit side of the Detroit River. And in Alaska, more than 100 truck drivers rallied in support of their counterparts in Canada by driving the 10 miles from Anchorage to Eagle River, the Anchorage Daily News reported.

Many members of the GOP have made comments supporting the demonstrations, including former President Donald Trump, who called Trudeau a “far left lunatic” who has “destroyed Canada with insane COVID mandates.”

Protesters have said they will not leave until all vaccine mandates and COVID-19 restrictions are lifted. They also called for the removal of Trudeau’s government, though it is responsible for few of the restrictive measures, most of which were put in place by provincial governments.

Prominent Republicans including Florida Gov. Ron DeSantis and Texas Attorney General Ken Paxton complained after crowdfunding site GoFundMe said it would refund the vast majority of the millions of dollars raised by demonstrators.

The site said it cut off funding for protest organizers after determining that their efforts violated the site’s terms of service by engaging in unlawful activity. Ontario Provincial Premier Doug Ford has called the protest an occupation.

In response, Paxton tweeted: “Patriotic Texans donated to Canadian truckers’ worthy cause.” Texas Sen. Ted Cruz said on Fox News that “government doesn’t have the right to force you to comply to their arbitrary mandates.”

Public Safety Minister Marco Mendicino shot back: “It is certainly not the concern of the Texas attorney general as to how we in Canada go about our daily lives in accordance with the rule of law.”

“We need to be vigilant about potential foreign interference … Whatever statements may have been made by some foreign official are neither here nor there. We’re Canadian. We have our own set of laws. We will follow them,” Mendicino said.

In a letter to Trudeau and the public safety minister, Ottawa Mayor Jim Watson said “what was initially described as a peaceful protest has now turned into a siege of our downtown area” with 400 to 500 trucks. He asked for 1,800 additional police officers. That would nearly double the existing resources of the entire Ottawa Police Service, which has 2,100 police and civilian members.

Dominic LeBlanc, the minister of intergovernmental affairs, blamed the GOP interference for inciting disorderly conduct and helping to fund entities that are not respecting Canadian law. Emergency Preparedness Minister Bill Blair said Paxton was wrong for commenting on it.

Bruce Heyman, a former U.S. ambassador to Canada, said groups in the U.S. need to stop funding and interfering in the domestic affairs of America’s neighbor.

On the street in front of Parliament Hill were thousands of signs ranging from “no more mandates” and “freedom of choice” to “truck you Trudeau” and some compared vaccine mandates to fascism.

Trudeau has called the protesters a “fringe,” but he faces calls by the opposition Conservative party to extend an “olive branch” to them. Some Conservative lawmakers, including one running to lead the party, have met and posted for pictures with them.

Embattled Ottawa Police Chief Peter Sloly called the demonstration an “unprecedented protest never seen in Canada” and acknowledged that authorities failed to plan for it to last more than three days.

Steve Bell, the city’s deputy police chief, said a person from Ohio was arrested in connection with a threat against Ottawa police headquarters.

Meanwhile, Ottawa police were investigating a fire at an apartment building that was apparently set by protesters. Matias Munoz said residents of the building south of Parliament Hill were already at their wits’ end Saturday night as the noise of the protest blared through their homes for the ninth night in a row.

When he came downstairs Sunday morning, Munoz said the carpet and floor were charred, and there were blackened fire-starter bricks strewn across the lobby.

Surveillance video showed two men light a package of the bricks in the lobby and tape or tie the front door handles together before leaving through a side door before dawn. The video also showed a different man entering the building and putting the fire out a short while later, Munoz said.

“Somebody trying to do something as insidious as taping the door shut so people can’t leave if there’s a fire in the main lobby — it’s terror, is what it is,″ Munoz said.

Gillies reported from Toronto and Corey Williams in Detroit contributed.

ROB GILLIES
TRACEY LINDEMAN
The Seattle Times does not append comment threads to stories from wire services such as the Associated Press, The New York Times, The Washington Post or Bloomberg News. Rather, we focus on discussions related to local stories by our own staff. You can read more about our community policies here.
Advertising