WASHINGTON — The Biden administration has approved the sale of $735 million in precision-guided weapons to Israel, raising red flags for some House Democrats who are part of the shifting debate over the U.S. government’s support for the Israeli government of Prime Minister Benjamin Netanyahu.

Congress was officially notified of the proposed sale on May 5, according to three people based on Capitol Hill familiar with the notification. That was nearly a week before hostilities intensified between Israel and Hamas in the Middle East.

The Biden administration called for a cease-fire on Monday evening after stopping short of doing so earlier in the day. It has said Israel has the right to defend itself against Hamas — a position that a majority in Congress has previously supported.

But a new generation of House Democrats more open to questioning Washington’s support of Netanyahu is raising some concerns about continuing to provide weaponry to Israel with little oversight and scrutiny. Some lawmakers want to know more about the proposed weapons sale, and its timing, suggesting it be used as leverage for a cease-fire. 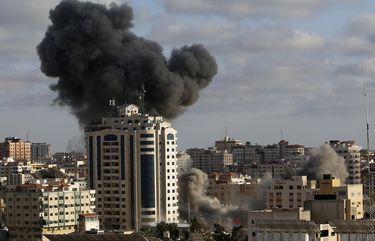 “It would be appalling for the Biden Administration to go through with $735 million in precision-guided weaponry to Netanyahu without any strings attached in the wake of escalating violence and attacks on civilians,” Rep. Ilhan Omar, D-Minn., a member of the House Foreign Affairs Committee, said in a statement Monday, responding to the The Washington Post’s reporting. “If this goes through this will be seen as a green light for continued escalation and will undercut any attempts at brokering a ceasefire.”

Rep. Joaquin Castro, D-Texas, who also sits on the committee, echoed Omar’s concerns about the “timing of this weapons sale” and the “message it will send to Israel and the world about the urgency of a cease fire, and the open questions about the legality of Israel’s military strikes that have killed civilians in Gaza.”

“The United States government must not exacerbate this horrific violence. The American people expect Congress to take a hard look at how military aid and weapon sales are used and ensure that human rights are upheld,” Castro said in a statement.

A group of House Democrats is currently weighing how best to raise pressure on the administration over the proposed sale. It’s not easy for Congress to block arms sales, and it remains unclear how lawmakers will proceed as the window to muster a joint congressional resolution of disapproval for this sale has closed.

The administration is required to inform Congress of such commercial arms sales. Once the formal notification is made, lawmakers have 15 days to object with a nonbinding resolution of disapproval.

“There are only four days left at this point in the expedited 15-day congressional review window, and any [joint resolution of disapproval] is required to be considered by [a] committee of jurisdiction for 10 days before being eligible for discharge,” said a Democratic congressional aide. “So the window for this proposed commercial sale has technically closed.”

Congress has never successfully blocked a proposed arms sale through a joint resolution of disapproval, according to the Congressional Research Service, although it has passed them in recent years. Former president Donald Trump vetoed three resolutions passed by Congress in 2019 to stop arms sales benefiting Saudi Arabia and the United Arab Emirates after the House and Senate voted to block the arms deals worth more than $8 billion. The nonbinding resolutions can be passed with a majority vote in either chamber, but need a two-thirds majority to override a presidential veto.

The bulk of the proposed sale to Israel, according to three people based on Capitol Hill familiar with the notification, is of Joint Direct Attack Munitions, or JDAMS — kits that transform so-called “dumb” bombs into precision-guided missiles. Israel, which has purchased substantial quantities of JDAMS from the U.S. in the past, has said its airstrikes in Gaza are precision guided to avoid hitting civilians. But Israeli officials charge Hamas with using civilians in the heavily populated enclave of Gaza as human shields.

The sale also includes GBU-39 small diameter bombs, which are also used against Palestinians, according to two people who asked to speak on the condition of anonymity to disclose sensitive information.

Congress may have received formal notice on May 5 of the commercial deal in which Boeing will provide the weapons to Israel. But some Foreign Affairs lawmakers were caught off guard over the weekend when they first learned of the sale, according to three congressional sources with knowledge of the private conversations, who added that the lack of transparency around arms sales has been a reoccurring problem under the committee chaired by Rep. Gregory Meeks, D-N.Y.

“There’s zero transparency on the House Foreign Affairs Committee and sensitive deals are regularly approved without scrutiny,” said a House Democratic aide who works on the committee.

The intraparty backlash against the proposed sale further highlights the growing divide among Democrats on U.S. policy toward Israel.

“There’s truth to the notion that there’s major shifts in the party about how we rubber stamp Israel writ large,” noted a Democratic Senate aide.

But even those who normally defend Israel condemned the country’s military actions that occurred over the weekend. Senate Foreign Relations Committee Chairman, Robert Menendez, D-N.J., released a statement on Saturday after an airstrike targeted and destroyed a building housing The Associated Press and other media outlets in Gaza City.

“I am deeply troubled by reports of Israeli military actions that resulted in the death of innocent civilians in Gaza as well as Israeli targeting of buildings housing international media outlets,” Menendez tweeted.

“While recent transactions were not related to current events on the ground, we absolutely should do all that we can to support our ally Israel in the face of ongoing terrorist activities that threaten their security,” said ranking Foreign Relations member James Risch, R-Idaho. “Under no circumstance should anyone think what is happening over there is anything but Iranian-supported terrorism against Israel. My support for Israel is unwavering in the face of this terrorist activity. I am disappointed that some of my colleagues in Congress would call this enduring partnership into question.”

Israel’s military claimed that the building was targeted because it housed “Hamas military intelligence assets,” who had been using the presence of civilian journalists as “human shields.” No evidence, however, was provided for those claims.

Secretary of State Antony Blinken told reporters at a news conference in Copenhagen on Monday he has not yet seen any evidence from Israel of Hamas operating in the Gaza City office building that hosted media outlets hit by an airstrike over the weekend.

“Shortly after the strike we did request additional details regarding the justification for it,” Blinken said, adding he “will leave it to others to characterize if any information has been shared and our assessment that information.”