Skip to content
By
KATHY GANNON
The Associated Press

MAZAR-E-SHARIF, Afghanistan (AP) — A powerful warlord in northern Afghanistan and a key U.S. ally in the 2001 defeat of the Taliban blames a fractious Afghan government and an “irresponsible” American departure for the insurgents’ recent rapid territorial gains across the north.

In an interview at his opulent home in Mazar-e-Sharif, the main city of the north, he said that even he had not expected the Taliban’s rapid wins, particularly in nearby Badakhshan province in the country’s northeast corner.

“It was surprising for me that in 24 hours, 19 districts of Badakhshan were surrendered without a fight,” said Noor.

He said in some areas the Taliban were small in number, perhaps even too few to capture a district, yet the military handed over their weapons and left. Reports and photos widely shared on social media show some government officials in the provincial capital of Faizabad boarding one of the last commercial flights to Kabul. The Afghan capital remains in government hands.

The 57-year-old Noor is one of the powerhouse players as Afghanistan enters what many fear will be a chaotic new chapter, with the final withdrawal of U.S. and NATO troops. He commands a personal militia with thousands of fighters. Once the governor of Balkh province, where Mazar-e-Sharif is the capital, he effectively still runs the province. As head of Jamiat-e-Islami, one of Afghanistan’s strongest parties, he wields influence across the north.

Though nominally united in opposition to the Taliban, he and other warlords are often bitter rivals. With the government weak and the insurgents gaining, the potential for violent fragmentation is high.

The Taliban’s capture of most of the remote Badakhshan province is particularly significant because the north has traditionally been the domain of the U.S.-allied warlords. It was the only province that didn’t come under Taliban control during the group’s 1996-2001 rule. It was once a Jamiat-e-Islami stronghold, the home province of one of Noor’s predecessors as its leader, Burhanuddin Rabbani, killed by a suicide bomber in 2011.

The insurgents now claim control over more than a third of the 421 districts and district centers across Afghanistan. They have also captured several border crossings with Iran, Uzbekistan and Tajikistan, opening up potential revenues for the Taliban and cutting key transportation routes. The Islam Qala border crossing with Iran was the latest to fall to the Taliban, on Thursday.

Noor was harsh in his criticism of the fractious Afghan leadership, saying it often left the army without reinforcements in battle or even food and erratically paid soldiers’ salaries. He said Afghan President Ashraf Ghani rules with a coterie of four people, a reference to the president’s increasingly reduced inner circle.

U.S. President Joe Biden defended the withdrawal in a speech Thursday and said it would be finished by Aug. 31. He urged greater unity among Afghanistan’s leadership, saying America has given the Afghan government the weapons, training and tools to sustain itself.

Still, Noor said the signs of a dispirited military predated Biden’s mid-April announcement that the U.S. was ending its “forever war,” noting that Afghan army recruitment was already down by 60% and corruption was widespread.

“We advised the government then that they had to work on the morale of the military, they had to be unified, but they did not listen,” he said. 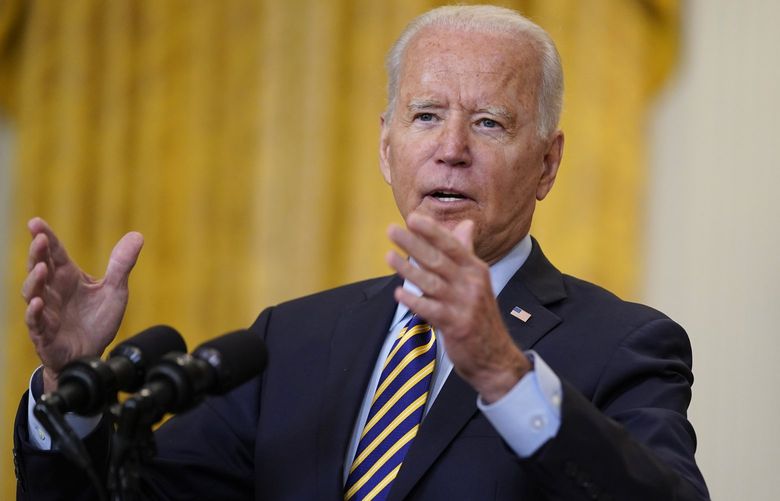 ‘Overdue’: Biden sets Aug. 31 for US exit from Afghanistan

Noor also criticized the Afghan government’s fighting strategy, saying the Afghan National Security and Defense forces’ leadership has overused its elite commando units. He said this included sending them into battle without proper preparations for reinforcements and re-supplies, as well as ordering them to hold checkpoints, a job they are not meant to do. Commandos were also not given proper rest, he said.

Though the Afghan air force has well-trained pilots, Noor said the fleet was overused and under-maintained. As a result “most of the planes are back on the ground. They cannot fly and most of them are out of ammunition,” he said.

Noor also slammed the quick U.S. departure as irresponsible. While Afghanistan appreciated the money and manpower America invested in the country, it did nothing to make Afghanistan self-sufficient, he said.

“We needed factories to produce our own ammunition and workshops to repair the aircraft and other vehicles that were given to the Afghan forces,” said Noor. “But the international forces did not work to build a foundation, a self-sufficiency in Afghanistan.”

Earlier this year as the Taliban gained momentum, Noor was one of the first to press for the creation of new militias, calling it a “people’s uprising.” Last month, the government launched a mobilization program, helping arm and finance volunteers under local commanders.

Noor said the new militias are needed as much to help bolster army morale as fight the Taliban.

Still, he acknowledged the dangers. In the 1990s, militias and warlords — including Noor — fought a civil war that wreaked devastation on Kabul, killed some 50,000 people and helped fuel the Taliban’s rise.

“There is a real possibility of a civil war. This is a very dangerous possibility,” he said. He warned it would be stoked by Afghanistan’s neighbors — Pakistan, Iran, Russia and India — all of whom use Afghan factions to advance their interests.

The new mobilization program only adds more militias of uncertain loyalties to the mix of militias maintained by Afghanistan’s multiple warlords since the 1990s.

Besides Noor, they include Uzbek warlord Rashid Dostum, accused of war crimes, and Gulbuddin Hekmatyar, a former U.S.-declared terrorist, who is currently in Kabul and has been a bitter enemy of Noor’s Jamiat-e-Islami for decades. Abdur Rasool Sayyaf’s past militias have been linked to brutal crimes against the Hazara ethnic minority during the 1990s civil war. The religiously regressive Sayyaf also had close ties to al-Qaida, and even operated training camps with the terrorist group in the 1990s.

A couple of kilometers (miles) from Noor’s home, he maintains a political office in a lavish compound, protected by armed guards and barricades. A group of his militiamen, some with assault rifles, others with machine guns, lounged on the lush grounds. Their leader, Habibullah Rahman Orfan, said they would follow Noor anywhere and accept his commands without reservations, referring to him as “the great” commander.

He said they would defend Mazar-e-Sharif, would begin an offensive to retake the districts in Balkh province currently under the Taliban and were ready to serve as Noor commanded.

KATHY GANNON
The Seattle Times does not append comment threads to stories from wire services such as the Associated Press, The New York Times, The Washington Post or Bloomberg News. Rather, we focus on discussions related to local stories by our own staff. You can read more about our community policies here.
Advertising