As scientists around the world race to develop a vaccine for the coronavirus, the pandemic is also stoking a surge of activity among activists who argue that such a vaccine must be resisted.

Leaders of the anti-vaccination movement, who in recent years have seen their efforts frustrated as U.S. states have adopted stricter laws promoting the inoculation of children, are seizing on the anxiety and social unrest generated by the virus and the government attempts to contain it.

Anti-vaccination protesters have been a visible presence in recent weeks at rallies to end the lockdowns that continue in many states. But beyond the rallies and hand-painted signs, the movement’s chief organizers have launched a less confrontational but more far-reaching information campaign. They maintain that mandated quarantines are new evidence of government officials’ zeal to control individual health-care choices.

“One of the main tenets of the marketing of mandatory vaccination has been fear. And never have we seen fear exploited in the way that we do now with the coronavirus infection,” Andrew Wakefield, the former British doctor and founder of the modern anti-vaccine movement, said at a three-day teleconference last week. “I think what we have reached is a situation where – I hope we’ve reached a situation where – the public are now sufficiently skeptical. “

As the pandemic kills nearly 2,000 people every day in the United States, Wakefield – whose medical license was revoked after he published a study, since identified as fraudulent, that linked autism with the measles, mumps and rubella vaccine – said the coronavirus is “no worse” than seasonal influenza.

“We are seeing a destruction of the economy, a destruction of people and families … and unprecedented violations of health freedom,” Wakefield said, speaking to viewers on a screen split with a poster advertising his new film agitating against vaccines. “And it’s all based upon a fallacy. “

The new push by prominent anti-vaccine activists – including Wakefield and Robert F. Kennedy Jr., who also spoke at the conference – worries vaccination proponents, who are already contending with a steep drop in vaccination rates as families anxious about contracting the coronavirus stay away from pediatricians’ offices.

“I’ve watched the leaders of the anti-vaccine movement scare parents for years. And in this moment, when parents are more scared than ever, they’re profiting off of it,” said Erica DeWald, director of advocacy at the nonprofit group Vaccinate Your Family. “Basically, the anti-vaccine leaders are telling their followers, ‘This is not real, this is not a concern for you, if you’re healthy, if you eat well, if you sleep enough, you will be fine. And this is once again a gateway for the government to force vaccines on to you and your children.’ “

The range of views within the movement on the current pandemic was on display last week at the “Health Freedom Summit,” where Wakefield and Kennedy spoke. The virtual conference, portions of which were viewed by The Washington Post, featured dozens of speakers and devoted one full day to the coronavirus. Limited access to the seminars and materials was offered free, with full access for $69.

Alana Newman, who hosted the online summit, said in an interview that she organized it with a friend using her savings and that outside groups or funders were not involved. She said she became concerned that the coronavirus case numbers were being exaggerated by the news media and that the virus may have been designed and released in order to benefit vaccine makers.

“We’re just trying to do what’s best for our kids,” said Newman, who lives in southwest Louisiana. “We’re not making a billion dollars off this. “

Some speakers promoted unproven treatments or preventive measures, such as zinc, vitamin supplements and sun exposure. Others speculated that the symptoms attributed to the virus could have other causes, such as plutonium falling to earth from destroyed satellites. Still, others warned without evidence of forcible inoculations of unwilling Americans with an eventual coronavirus vaccine.

A recurrent focus of the presenters was Microsoft founder and philanthropist Bill Gates, who has been a prominent voice on public health policy amid the pandemic and is funding efforts to track, treat and ultimately cure the disease. Gates has been the target of conspiracy theories that he helped create the pandemic and plans to use it for financial gain and to develop a worldwide system of human surveillance. 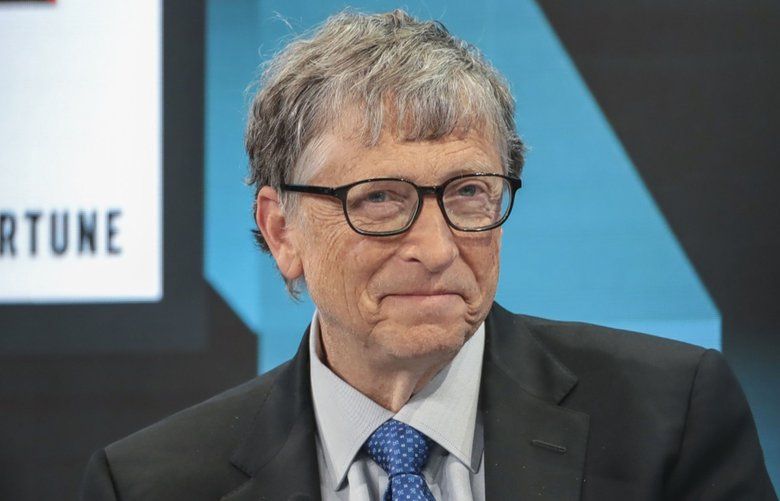 Bill Gates, at oods with Trump, becomes a right-wing target

Kennedy touched on the latter subject in his talk, discussing what he said were Gates’s efforts to develop “an injectable chip” and “subdermal biometric tattoos” that would enable the tracking of human movements.

“A health authority, the police, whatever, will be able to read your health records,” he said. “It’s like a bar code. “

After sharing a story about friends who had been surfing in Malibu the previous day, when beachgoers were being ticketed by the police for violating state quarantine restrictions, Kennedy mused on a dark future.

“Are we headed for a world where Microsoft is going to be able to follow us?” he said. “What if we live in a world where the police will not have to go to the beach, where they will be able to follow on your cellphone or your biometrics, and see that you went to the beach, and then just take $1,000 out of your salary from the cryptocurrency that your payroll check is going into?”

He ended with a plea for listeners to share their emails with his advocacy group, Children’s Health Defense.

In an interview, Kennedy said he was not arguing that Gates helped engineer the virus, but does believe the Seattle billionaire is “using this emergency, this crisis, to promote his interests.” Kennedy said there are legitimate concerns that initiatives such as contact tracing for coronavirus infections could lead to a more sweeping “surveillance state,” and that the negative consequences of quarantine measures are not being balanced against their benefits to public health.

Physician Paul Offit, director of the Vaccine Education Center at the Children’s Hospital of Philadelphia, said anti-vaccination activists’ response to the pandemic and social distancing measures jibes with the movement’s history of accusing the government of tyrannical health initiatives.

“I think this is consistent with their anti-government stance,” said Offit, who has written extensively about the movement and the history of vaccination policies. “I can promise you that even when this [coronavirus] vaccine comes out, even if it’s perfect and it’s wonderfully safe, they will still say it’s causing things that it doesn’t cause. “

Louisiana state Rep. Danny McCormick, R, who also spoke at the conference and led a rally in Baton Rouge on Saturday demanding the lifting of quarantine restrictions, said people are newly receptive to warnings of government intrusion as they suffer through the battered economy.

“Government overreach has destroyed the greatest economy in the history of the world in a matter of weeks,” said McCormick, who is pushing a bill that would require schools to inform parents of their right to opt out of vaccines. “That’s of great concern to people. “

While it is hard to determine the extent to which the broader public will welcome such messages, one measure can be found in the audience for the Health Freedom Summit at which McCormick spoke.

Newman, the conference organizer, said it had more than 30,000 registrants.