Global power grids are about to face their biggest test in decades with electricity generation strangled in the world’s largest economies.

War. Drought. Production shortages. Historically low inventories. And pandemic backlash. Energy markets across the planet have been put through the wringer over the past year, and consumers have suffered the consequences of soaring prices. But, somehow, things are on track to get even worse. 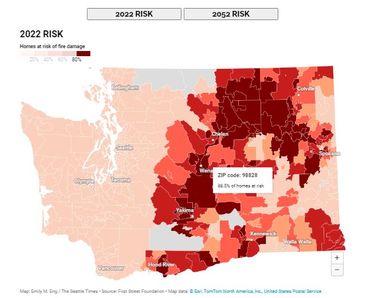 Planning to buy a house in Washington? You may want to check the wildfire risk

Blame the heat. Summer in much of the Northern Hemisphere is a typical peak for electricity use. This year, it’s going to be sweltering as climate change tightens its grip. It’s already so hot in parts of South Asia that the air temperatures are blistering enough to cook raw salmon. Scientists are predicting scorching months ahead for the U.S. Power use will surge as homes and businesses crank up air conditioners.

The problem is that energy supplies are so fragile that there just won’t be enough to go around, and power cuts will put lives at risk when there are no fans or air conditioners to provide relief from searing temperatures.

Six Texas power plants failed earlier this month as the summer heat just began to arrive, offering a preview of what’s to come. At least a dozen U.S. states from California to the Great Lakes are at risk of electricity outages this summer.

Power supplies will be tight in China and Japan. South Africa is poised for a record year of power cuts. And Europe is in a precarious position that’s held up by Russia — if Moscow cuts off natural gas to the region, that could trigger rolling outages in some countries. 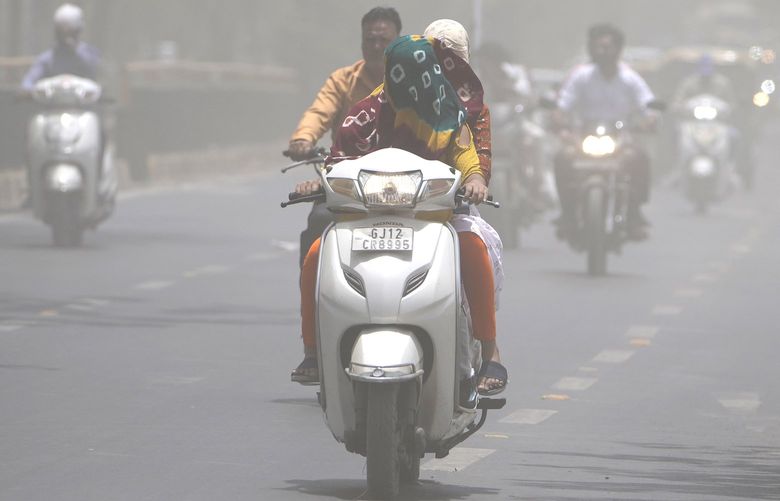 “War and sanctions are disrupting supply and demand, and that’s coupled with extreme weather and an economic rebound from COVID boosting power demand,” said Shantanu Jaiswal, a BloombergNEF analyst. “The confluence of so many factors is quite unique. I can’t recall the last time they all happened together.”

Without power, human welfare will be under duress. Poverty, age and proximity to the equator will increase the likelihood of illness and death from unrelenting temperatures. Prolonged outages would mean that tens of thousands may also lose access to clean water.

If blackouts persist, and businesses shutter, that will also bring huge economic shock.

In India, power shortages in many states are already nearing levels from 2014, when they were estimated to have shaved about 5% off the country’s gross domestic product. That would mean a reduction of almost $100 billion should the outages become more widespread and last through the year. A run on electricity would also likely contribute to more gains for power and fuel markets, raising utility bills and further fanning inflation.

When plants on the Texas power grid failed this month, wholesale power prices in Houston briefly jumped above the $5,000 a megawatt-hour price cap, surging 22 times higher than the average cost of on-peak power that had been secured for the day.

The world is grappling with “more than two years of global supply chain distress caused by the pandemic, the spreading fallout from the war in Ukraine and extreme weather caused by climate change,” said Henning Gloystein, an analyst at Eurasia Group. “The main risk is that if we see major blackouts on top of all the aforementioned problems this year, that could trigger some form of humanitarian crisis in terms of food and energy shortages on a scale not seen in decades.”

How the energy transition brings strain

This year might enter the record books for the biggest-ever strain on global power, and the hurdles aren’t likely to go away anytime soon. Climate change means that the extreme heat waves of today will become more common, continuing to mount pressure on electricity supplies.

At the same time, a lack of investment in fossil fuels in recent years coupled with strong demand growth, especially in Asian emerging markets, should keep markets tight for the next few years, said Alex Whitworth, an analyst with Wood Mackenzie Ltd. in Shanghai. And while wind and solar’s share of total capacity is expected to soar over the next decade, until energy storage facilities catch up to the shift, that will place even more stress on grids, he said.

“You’ll be facing a supply scare every time there’s clouds or storms or a wind drought for a week,” Whitworth said. “We really expect these problems to get worse in the next five years.”

Of course, the switch to renewable power is crucial in the fight against climate change. Burning even more coal now to cope with the energy shortage would just increase emissions, creating a vicious cycle that can lead to more heat waves and more strain on grids.

Here’s a look at what’s happening across the globe.

Supplies of natural gas, the No. 1 power-plant fuel in the U.S., are constrained nationwide and prices are soaring. Power in much of the country and part of Canada will be stretched, according to the North American Electric Reliability Corporation. It’s among the most dire assessments yet from the regulatory body. Consumers will be asked to step up to help keep the grids stable by curtailing their consumption.

In California, the most populous state, gas supplies are clipped even further because of a pipeline rupture last year that has limited imports. Plus, climate change is fueling drought, severely curbing hydropower supplies. The California Independent System Operator said this month that the state may be at risk of blackouts for the next few summers amid extreme weather.

On the 15-state grid operated by the Midcontinent Independent System Operator (MISO), consumers in 11 states are at risk of outages. MISO, which serves about 42 million people, projected it has “insufficient” power generation to meet the highest demand periods this summer, especially in its Midwest states. The grid has never before given a warning of this kind before the start of summer demand.

In Texas, the grid “is still at risk” of shortages despite the state’s scramble to improve resilience after a February 2021 winter storm that left millions in the dark for days, said Gary Cunningham, director of market research at brokerage Tradition Energy.

Aging infrastructure and maintenance delays during the pandemic have added to the problems of more severe weather, said Teri Viswanath, lead economist for power, energy and water at CoBank ACB.

“The U.S. is experiencing more outages globally than any other industrialized nation,” she said. “About 70% of our grid is nearing end of life.”

The epicenter of the outages so far has been South and Southeast Asia, where brutal heat waves have put air conditioners on full blast. Blackouts have been basically nationwide in Pakistan, Sri Lanka and Myanmar, home to a combined 300 million people. And in India, 16 of the nation’s 28 states — home to more than 700 million people — have been grappling with outages of two to 10 hours a day, a state official said this month.

India’s government has recently directed firms to increase purchases of expensive foreign coal, while also rolling back environmental protocols for mine expansions to try to increase fuel supply. But it remains to be seen whether these moves will ease the strain. The looming monsoon season should bring cooler temperatures and trim energy demand, though it can also flood mining regions and hamper fuel supply.

In Vietnam, the state-owned utility has been bracing for power shortages for more than a month as demand rises while domestic coal supply has sagged and foreign fuel costs have surged.

In China, where coal shortages led to widespread power curtailments last year, officials have promised to keep the lights on in 2022 and have pressed coal miners to boost output to a record. Even so, industry officials have warned that the power situation will be tight this summer in the country’s heavily industrialized south, which is far from inland mining hubs and therefore more reliant on expensive foreign coal and gas.

Japan had a power scare in March, when a cold wave triggered a demand surge just days after an earthquake had knocked several coal and gas plants offline. Power supply is expected to be tight during the upcoming summer months, and demand will likely exceed supply again next winter as well, according to grid forecasts. The Tokyo Metropolitan Government has started a campaign for energy conservation, asking residents to take measures like watching less television.

The risk of blackouts is lower in Europe, because fewer people use air conditioning at home. The continent is also racing to fill its gas storage.

But there’s little room for error. A dry spring in Norway has limited hydropower supplies. Adding pressure to prices and supplies are extended outages at Electricite de France SA’s nuclear reactors. The region’s biggest producer cut its nuclear output target for a third time this year, the latest sign that Europe’s power crisis is worsening.

If Russia were to cut off natural gas supplies to the region, that could be enough to trigger rolling blackouts in some countries, said Fabian Ronningen, a power markets analyst for Rystad Energy.

While he said the chances that Russia would make that bold move are “unlikely,” his views have become more pessimistic as the war in Ukraine continues; two months ago, he said, he’d have put the chances at “highly unlikely.”

Some countries have been receiving huge imports of liquefied natural gas and would probably have adequate supplies to absorb the blow, including Spain, France and the UK. The story might be different in Eastern Europe, where nations including Greece, Latvia and Hungary use gas for a significant portion of their power and are heavily dependent on Russian supplies. That’s where the potential would be highest for blackouts, Ronningen said.

“I don’t think European consumers can even imagine a scenario like that,” he said. “It’s never happened in our lifetime.”

RAJESH KUMAR SINGH
Dan Murtaugh
Naureen Malik
The Seattle Times does not append comment threads to stories from wire services such as the Associated Press, The New York Times, The Washington Post or Bloomberg News. Rather, we focus on discussions related to local stories by our own staff. You can read more about our community policies here.
Advertising