Skip to content
By
Johnny Diaz
The New York Times

Three men are facing federal charges after entering a restricted area of a national park in southwest Alaska in 2018 and approaching a group of wild brown bears while they were feeding, prosecutors said.

The men — David J. Engelman, 56, of Sandia Park, New Mexico; and Ronald J. Engelman II, 54, and Steven R. Thomas, 30, both of King Salmon, Alaska — were each charged with entering a closed area at Katmai National Park and Preserve, disorderly conduct that created hazardous conditions, and approaching within 50 yards of a large mammal at the national park, the U.S. attorney’s office for the District of Alaska said in a statement Thursday.

The men left an authorized viewing platform at the park’s Brooks Falls on Aug. 9, 2018, and waded into the river where bears were feeding, according to court documents.

Park rangers were alerted by other visitors and people who were watching a livestream of the bears.

“The three men created a hazardous condition as brown bears were feeding on the falls and in the Brooks River just below the falls,” the U.S. attorney’s office said, adding that the men “came within 50 yards of the brown bears.” 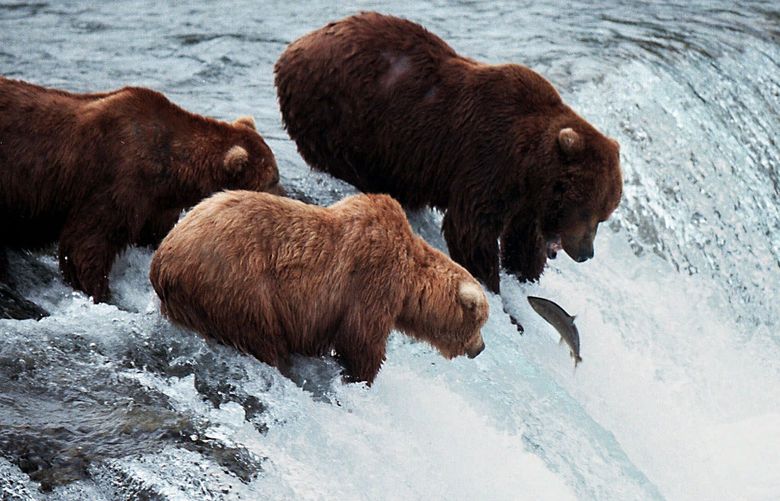 Fat Bear Week is here. You can enjoy the bears online, and vote for your favorite.
Advertising

The U.S. attorney’s office said the National Park Service was investigating the case. If convicted, the men could each face up to a maximum of six months in prison, a $5,000 fine and a year of probation, prosecutors said.

Elevated viewing platforms at the park are the only outdoor areas where bears can be safely observed at close distances, according to the park, which encompasses about 4.1 million acres and is about 290 miles southwest of Anchorage, Alaska.

The park advises that visitors remain at least 50 yards from any bear at all times.

“Approaching any large mammal within 50 yards and remaining within 50 yards of a bear using a concentrated food source, like spawning salmon, is prohibited,” according to the park.

The Brooks River is a popular area for the park’s 2,200 brown bears, which feast on the rich concentrations of salmon that pass through the area every year.

From late June to mid-October, as the fish swim upstream to spawn, dozens of bears gather to eat along the river, a 1.5-mile waterway that winds between two lakes. Brown bears can gain up to 4 pounds a day. As their hibernation begins, the largest adult males can weigh more than 1,200 pounds.

To show the bears’ drastic weight gain before hibernation, park officials feature them in the annual Fat Bear Week, an online contest in which people vote on their favorite plump bear from 12 contestants. The contest begins Wednesday and runs through Oct. 5.