LONDON – Opposite Britain’s Parliament, bereaved families of those lost to the coronavirus pandemic and hundreds of volunteers are hand-painting individual hearts on a half-mile-long wall that runs along the River Thames.

Each heart symbolizes a life lost to the virus – with at least 145,000 hearts to feature on the memorial by the time it is completed.

The National Covid Memorial Wall, coordinated by the Covid-19 Bereaved Families for Justice group, said Monday that “each heart represents someone who was loved. Someone who was lost too soon to Covid-19,” adding that it would take, on average, 10 minutes for visitors to walk the length of the 6-foot-high wall.

Organizers predict the memorial will take days to complete. 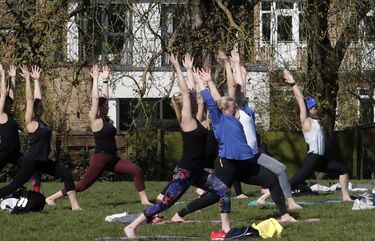 “Like the scale of our collective loss, this memorial is enormous,” Matt Fowler, co-founder of the organization, said as those involved with the campaign expressed hope that Prime Minister Boris Johnson would visit the site.

Britain’s doctors, nurses, lawmakers and key workers have long called for the government to install a permanent tribute to the huge number of coronavirus victims, asking that officials commemorate the crisis with an annual “covid memorial day.”

“We owe it to every single family to hear them, to hear them properly and to learn the lessons through a public inquiry,” he tweeted along with several photos from his visit.

The team behind the memorial told British media that while it had not obtained official permission to install the memorial, it hoped that the government would allow it to become a permanent fixture, to serve as a reminder of the human and emotional toll of the crisis.

The organization, which has previously called for an inquiry into the government’s handling of the pandemic, said that volunteers would continue to add hearts to the wall until the pandemic is over.

Last week, Johnson said officials would work to install a “fitting and permanent” memorial to those who had lost their lives to a virus which ravaged the United Kingdom – leading many Britons to condemn the government’s handling of the pandemic.

Many members of the public and essential workers say that the government is responsible for failures which contributed to the high death toll from the disease. Last year, the prime minister was widely criticized for not locking down the country or closing borders swiftly enough, acting too slowly to implement a reliable test and trace system, and failing to supply front-line health workers with adequate personal protective wear needed to treat those diagnosed with covid-19 without contracting the virus themselves.

On social media, many praised the memorial, which comes as Britain continues to slowly ease out of stringent lockdown restrictions and its third national lockdown.

And while many other countries are also attempting to return to a sense of normalcy and focusing on rebuilding battered economies, the emotional toll of the pandemic continues to weigh heavy as communities around the world contemplate how to pay tribute to the huge scale of lives lost over the last year.

Several towns in England will create memorial gardens and woodlands to remember victims and allow residents a peaceful place to grieve for friends and family.

In the Italian town of Casalpusterlengo, local artist Ottorino Buttarelli asked residents to collect stones from a nearby river so that he could create a tribute to victims. Scrawled onto many of the stones are the names of coronavirus victims. The collection has become a growing tower of cobblestones that serves to remember those in the town who did not survive.

“People in this village were left to die in solitude and silence, often without a funeral. Bringing the stone and writing the name became the funeral,” Buttarelli told the New York Times.

Last year, a German woman, Gertrud Schop, spent hours lighting more than 4,000 candles which she placed in the shape of a cross outside her home in the town of Zella-Mehlist. The 60-year-old said she wanted to create a space to remember the victims and reflect on the tragedy.

“I have heard a lot of numbers and read statistics, but I have not seen that the numbers reach people’s hearts,” she told German media.