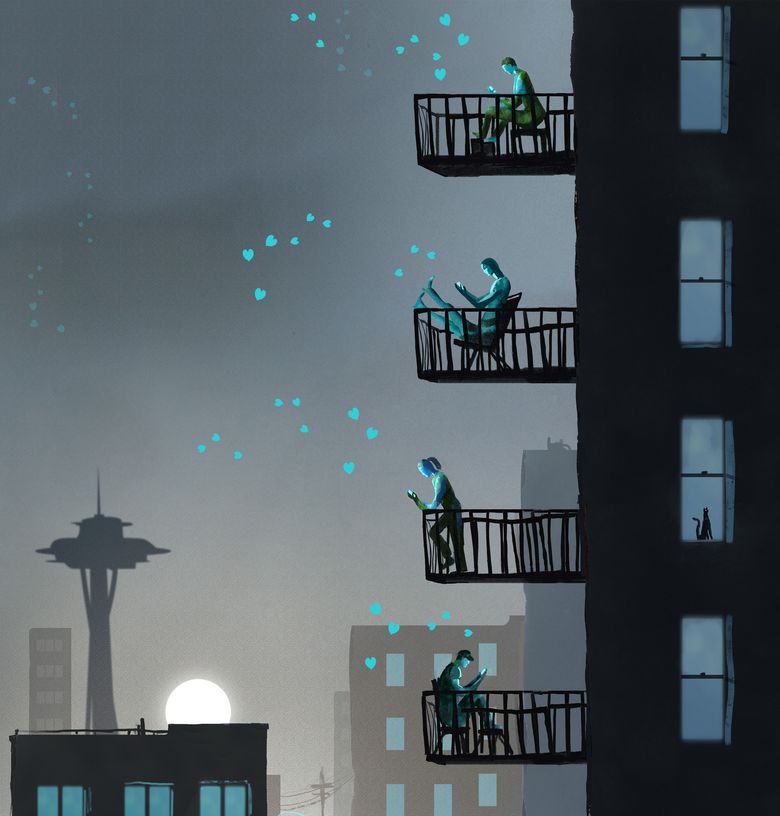 Jen Au downloaded Bumble and OkCupid after her friends dared her to go on 10 dates with 10 different men. Within a month, she had completed the dare, gone on 10 dates and was entirely worn out — with no love in sight.

“Dating just kinda sucks,” she says. “I had never been the type to think that I would get married, but after a few dates I was like, ‘Please give me the sweet release of marriage. It’s clear what I want now. Not this, not this.'”

And that’s dating in Seattle.

It’s frustrating, confusing, tiring. And in this desperate land of 30-year-old high school cliques and lost love, dating apps have come to the rescue of lonely singles everywhere. While they may have started out as simple web pages with a person’s photo, some fast facts and a messaging function, these apps are evolving and multiplying in number while becoming more specific and easier to use.

A closer look at the city’s dating culture exposes the impact of the Seattle Freeze (if you don’t know what that means, Seattleites are said to be standoffish and unfriendly.) According to a survey released by Seattle-based Pemco Insurance this past April, just under 40 percent of the poll’s 1,200 participants in Washington and Oregon said it’s not important for them to make new friends.

Additionally, this app culture has also shown Seattle’s prejudiced tendencies when it comes to dating.

“I think being openly bisexual [on dating apps] is kind of a turn off for cis men,” said Raquel, a 24-year-old Filipino nurse who asked to be identified by her first name only because she is not out to her extended family. “I’ve had people say to me, ‘I’m not racist because I only date Asian women. I’m not homophobic because I want to watch you kiss a girl.'”

Kai-Huei Yau, a 36-year-old photographer, said being Asian on dating apps is hard, especially in the Pacific Northwest. People will express on their profiles that they’re only looking for white men, he said.

“I tend to get more matches in bigger, more diverse areas. Some people kinda paint [Seattle] as a dating dystopia,” said Yau.

If you happen to be looking for a partner of color, Seattle may in fact be a dystopia of sorts.

“I was trying really hard to date people of color and it was really difficult,” said Au, a 32-year-old photographer based in Seattle. Because of the racial demographic breakdown in Seattle, she says, “Statistically, I thought that I’d [end up dating] a white guy with an Asian fetish [who] works in tech.”

Even if you are not part of a minority group, if you’ve aged out of the younger range — typically between 19 and 25 — it still may be hard to find luck with online dating.

“Dating in Seattle is awful,” said Megan Clark, 34. “It’s hard in Seattle because of the Freeze. People in Seattle are very nice, but they get the feeling they should just mind their own business. It’s hard for me specifically now just being older. The herd is thinning.”

The most popular dating apps — Tinder, Bumble, OkCupid and Hinge — have a swiping feature. An image of a single pops up, sorted by your requested gender, age range and area. You can either swipe “yes” or “no,” depending on their profile picture, biography or other app-specific features. And new apps are popping up to fill the spaces these apps haven’t — even Facebook launched its own dating service in the U.S. earlier this fall, allowing you to hunt possible matches and court crushes from the comfort of your Facebook app.

However, there’s nothing quite as obscure as “niche” dating apps.

“The reason niche dating apps are getting more popular is because they’re really appealing to 25-to-35-year-olds and older. It’s right when people are really starting to think a little bit more on urgency,” said Isaacson. “They don’t want to spend nine to 10 hours on dating apps, or if they do, they also want one where people are slightly more suited for a long-term relationship. There’s this major shift happening, where people that are used to dating apps are growing older; they got their first dating apps in 2012, and the market of dating apps is growing along with them.”

The first dating sites popped up in the 1990s — there was the now-defunct kiss.com in 1994, followed by Match.com in 1995 and eHarmony in 2000. When these platforms first arose, the majority of people were still dating the “old-fashioned way” — meeting at bars, getting set up by friends, etc. — and some singles judged those trying this new way to date. Two decades later, online dating is the first stop for singles — 40 million Americans use dating apps, according to eHarmony.

And, whether you like them or not, more and more dating apps — especially niche services — are popping up for singles who have grown tired of Tinder or Bumble. In fact, Dig is pretty tame compared with some specified sites.

Are you a marijuana user? HighThere! might be the app for you. Don’t eat gluten? Try GlutenFreeSingles. Farmers can find love at FarmersOnly. Or if you’re settling? Settle for Love. There’s even Ugly Schmucks, a site “for those who prefer genuine personality over outer appearance.”

No matter your interests, it seems, there is a dating app tailored to you.

Clark got her first dating “app” eight years ago — Match.com — when the site was just a pixelated page on a desktop. But even now, she says, she wouldn’t use a niche dating app. Not even with the Freeze, her growing roster of married friends or the dismal Seattle social scene.

“I think you’re doing yourself a disservice in some ways for [using niche dating apps],” Clark said. “I already have a narrow idea of who I would be good with. You never know who you’re going to be attracted to and could have a relationship with.”

If apps aren’t your thing, if you’re averse to the internet or if you’re simply sick of getting ghosted on Tinder, Seattle has yet another a solution: Simply Matchmaking. This specialized matchmaking service is operated by married couple Ali and Matt Migliore. For a flat fee, the matchmakers will set up dates with potentially compatible singles. Clark used the service along with dating apps, and while she admired how committed the service was, she said you might go a long time without being set up on a date.

Still, Simply Matchmaking has been pairing singles since 2004, and the service asserts Seattle is a “great place to date.”

“There are so many fabulous people that have grown up in Seattle,” said Ali Migliore. “I think you can either give into the Seattle Freeze or you can overcome it. Everything in life is a choice.”

Migliore encourages her clients to use dating apps but warns that they can be overwhelming, especially when new apps are continuing to pop up.

“I think with dating apps, everything just goes at 100 miles per hour. Life in 2019 is just in fast forward,” she said. “The more dating apps keep coming out, the more the options seem infinite.”

Dating can be scary, overwhelming, or even a symbol of all-encompassing doom. But now, more than ever, there are seemingly innumerable outlets to find a partner. Yes, they’re mostly online. Yes, they have their issues. But these apps allow those who feel uncomfortable with the bar scene, those who don’t like to meet strangers, or those who feel too busy to meet people the “traditional” way to find singles from the comfort of their phones.

And that’s worth something.

“If I were to go out into the world, I don’t know the best luck I would have in finding somebody. I don’t do social stuff that other people my age would do,” said Megan Gililland, a 27-year-old self-proclaimed introvert. “So dating apps are convenient because I can be at home, hanging out, easily swiping through. I don’t have to have the other person in front of me, so if something goes wrong, I have an escape route.”

Blocking someone on an app, for instance, is a lot less awkward than verbal confrontation. However, being able to communicate behind a screen allows for prejudices to be easily communicated.

Still, it’s not all doom and gloom.

Laura Dimmit, a 29-year-old librarian, met her fiancé after using dating apps for only a month. She got lucky — she’ll be the first to admit that. But her story, and so many others, is proof that it does happen.

Maybe, just maybe, dating apps are a way to step out of the Freeze and into something more … temperate.

“Clearly, it worked out better than I could have ever imagined,” said Dimmit. “Sometimes people feel weird about disclosing that they met their significant other online, but I don’t. It’s just another way to meet people. What’s wrong with that?”