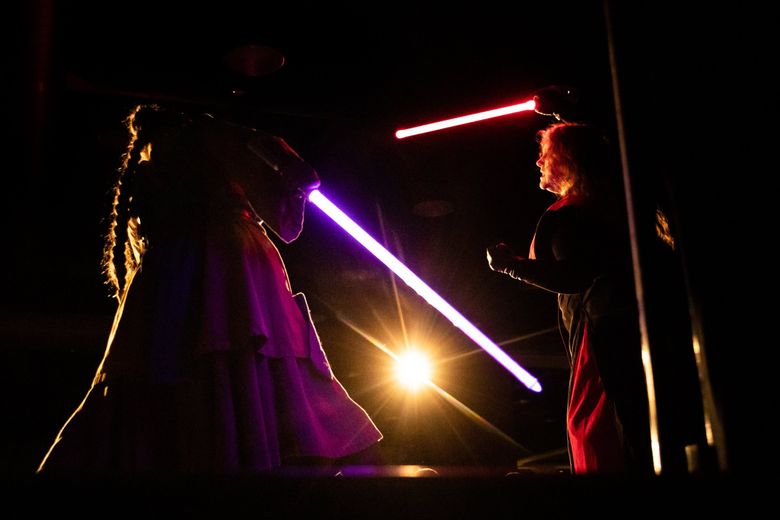 The sound comes and goes, like a bee buzzing by your ear or a low-flying drone; it’s a deep hum, instantly recognizable despite being nothing but a soft, vague whir. Is it a bird? Is it a plane? No. It’s the unforgettable, inimitable, practically trademark-able sound … of a lightsaber.

The light saber is an iconic piece of the “Star Wars” franchise, the fictional weapon that sets George Lucas’ immortal world apart from all other space operas or sci-fi epics. Such stories typically also feature aliens, starships and fantastical planets, but only “Star Wars” has the light saber, a high-tech weapon for scrappy, man-to-man sword fighting, a symbol of ancient honor from a fictional future that takes place long ago in a galaxy far, far away.

But if you can’t contain your excitement as you await the Dec. 19 premiere of the next “Star Wars” movie, “The Rise of Skywalker,” and you just want to see people fighting with light sabers or learn some light-saber fight moves yourself, you can do so in Seattle.

Saber Guild is a nonprofit “Star Wars” fan organization that is “Lucasfilm-recognized,” says guild global public relations director Kay Ahern, a member and Seattle resident. The organization has 29 chapters worldwide and just shy of 800 members; Seattle’s chapter is called the Kamino Temple, named after a planet in the “Star Wars” universe that is, appropriately, quite rainy. Kamino Temple is currently the world’s largest branch of the Saber Guild.

Can't wait for 'Star Wars: The Rise of Skywalker'? Get ready with these Seattle-area events.

“I think Seattle is pretty nerd-friendly,” said Ahern. “We also have a big ‘Star Wars’ costuming community here in general.”

Saber Guild’s fights are all theater, entirely choreographed and intended for an audience, with scripted scenes written to fit into the “Star Wars” canon. For this, no polyester Princess Leia robes from Amazon will do. Costumes must be screen-accurate, with some enthusiasts researching even the type of thread and seams used in the film costumes. Members are unabashedly hard-line about the wardrobe because nothing can get in the way of giving the audience (and themselves) a fully immersive experience. Of course, the Saber Guild is not the only hyper-devoted “Star Wars” fan group — locally, there are groups like Alpha Base, the Rebel Legion, and even a chapter of a group called Droid Builders that does, in fact, build robots. But the Saber Guild is the only cosplay organization with a focus on the distinctive mode of hand-to-hand combat.

A “real” lightsaber (see: imaginary) is a deadly weapon, a giant neon phallus that protrudes from its unobtrusive sheath on command and can cut through metal, rock and flesh like a laser. Toy lightsabers are everywhere, of course, prevalent as Christmas gifts for kids since the original trilogy of films came out, starting with “A New Hope” in 1977. But those wielded by the warriors of the Saber Guild are no mere playthings. Well, actually, they are playthings, but they’re elaborate ones.

“Our lightsabers are basically large flashlights,” explained Ahern. “The hilts are machined aluminum tubes that are decorated with various bits and bobs and a button that triggers an LED, and the LED carries light up a polycarbonate stick with reflective cellophane in it to give it the full effect.”

There are degrees of intricacy to their lightsabers — some include sound cards (that wuuuuuhm is important).

“The common thread that ties them together is they can take a hit,” said Ahern. “If you go out and try to buy one from Hasbro, it’s probably going to break against one of ours.”

Ahern estimates that a cheap theatrical lightsaber can be made for roughly $80, but the sky’s the limit from there. Ahern cosplays as Kylo Ren, the dark, brooding anti-hero of the final three films of the Skywalker saga — which concludes with the upcoming ninth chapter — and Ahern’s one-of-a-kind lightsaber is film-accurate, including the addition of glowing crossbars that can light up separately. The weapon cost Ahern roughly $1,200 to create.

If you’re more into sport than theater, there are also organizations that do for-real lightsaber fighting. The Saber Legion is a competitive sports-combat organization (with about 40 active chapters worldwide and roughly 7,000 members) in which combatants participate in unchoreographed sparring and actual tournaments … with lightsabers.

“Thank about it like this: It’s sort of like sword-fighting MMA,” says Jared Graham, the Saber Legion’s membership lead and de facto PR guy. The rules are similar to those in fencing — strikes anywhere on the body (except for the neck, groin, fingers and feet) count for one point, and the combat includes both slashing and stabbing, much like fighting with metal sabers.

In the Saber Legion, fighting styles are all over the map; in any given tournament, a fighter trained in classical épée might find himself pitted against someone who practices eskrima (Filipino stick-and-knife fighting) or even, as Graham puts it, “someone who taught themselves to fight in a mirror at home.”

At the Saber Legion, the weapons are heavy, the blows are real, the athletes are elite and the matches are competitive. The French fencing federation has even recognized lightsaber fighting as an official sport.

Combatants essentially wear fencing gear, including a mesh mask, chest pads and (if necessary) a groin cup, but unlike competitive fencing, there is no “approved” gear — pads are only assessed for functionality. That means that fighters are free to customize their armor, which Graham says roughly 10% of members actually do. There is no uniform requirement in the Saber Legion, and Graham says any given meet might feature fighters dressed in anything from “Star Wars” gear to outfits from other movies (Graham himself fights dressed as Marvel’s Deadpool).

“We don’t mandate that [gear] has to be specific to ‘Star Wars,’” Graham said. “We exist in a delta between ‘Star Wars’ fans and people looking for a fitness activity. People who enjoy combat, who want to move from a nylon sword or a steel sword to a lightsaber instead.”

The lightsabers swung by the Saber Legion are robust — similar to those used by Saber Guild members, but often with necessarily thicker polycarbonate shafts. Most members purchase theirs from websites like SaberForge.com, where a basic model will run you about $60; models with extras, like changing colors and sound boards, start around $200. And really, if a lightsaber swings in Seattle and it doesn’t make a sound, what’s the point?

Both organizations are free to join — the only price is your time, devotion and the cost of the materials to put together your lightsaber and costume. The Saber Legion is currently in the process of rebuilding their Seattle chapter, so if you’re interested in clashing swords “Star Wars”-style, check their website for updates.

If instead you want to learn to wield the glowing blade on stage, join Saber Guild — they will loan you a lightsaber if you want to dip your toe in. Kamino Temple’s theatrical fighting classes are held once a week at Cornish College of the Arts; these are only for adults, though the group does some children’s training at conventions.

The group puts on about seven big events annually (and more in a year with a “Star Wars” movie coming out). They hit the Cons, of course (like Emerald City Comic Con and Geek Girl Con), but the performers also do their roughly 20-minute shows at the Washington State Fair and during Pride week, plus one-minute bouts on the field during Tacoma Rainiers or Everett AquaSox games. They can even be booked for events in exchange for donations to charities like Seattle Children’s (for licensing reasons, the group cannot charge for anything, and the organization is entirely volunteer.)

Your next opportunity to see the dueling lightsaber dance is at Galactic Lights theme night at the Woodland Park Zoo’s WildLights on Wednesday, Dec. 4. Just follow the faint whooshing in your ears until you see the flashing colors of, as a wise man once put it, “an elegant weapon for a more civilized age.”

Tantri Wija is a Seattle-based freelance writer. Reach her at Tantri.s.wija@gmail.com.