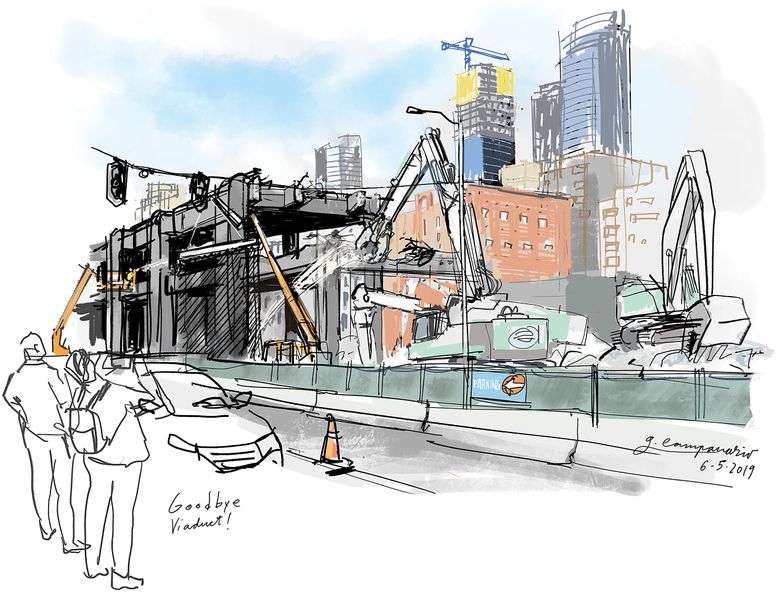 Bite by bite, the demo crunchers are chewing away the Alaskan Way Viaduct. Tourists and locals roaming past the Seattle Aquarium and Waterfront Park linger to watch the fascinating spectacle.

It’s been less than six months since the replacement Highway 99 tunnel opened and the demolition of the 1953 double-decker started. And most of it’s already gone. From this location at the base of Union Street and all the way to Colman Dock, the breeze now flows freely and the noise of freeway traffic is forever gone.

Given how much some people loved the viaduct, I’m surprised I haven’t heard of anyone wanting to save any pieces of the rubble as souvenirs. (Or to collect them as fundraising tokens!) WSDOT media spokesperson Laura Newborn told me that they have not received many requests, but they are keeping a list with the names of a few people who have asked.

I was reminded to return to the waterfront, where I did many sketches of the viaduct when it was still all in one piece, when I drove through the new tunnel earlier this week. This couldn’t be a more historic time to go beyond Pike Place Market and come down for a stroll by Elliott Bay — and an excuse to see the view from the Seattle Great Wheel perhaps?

New skyscrapers punctuate the skyline as the destruction of the old viaduct happens in the foreground. It’s a moment worth witnessing.