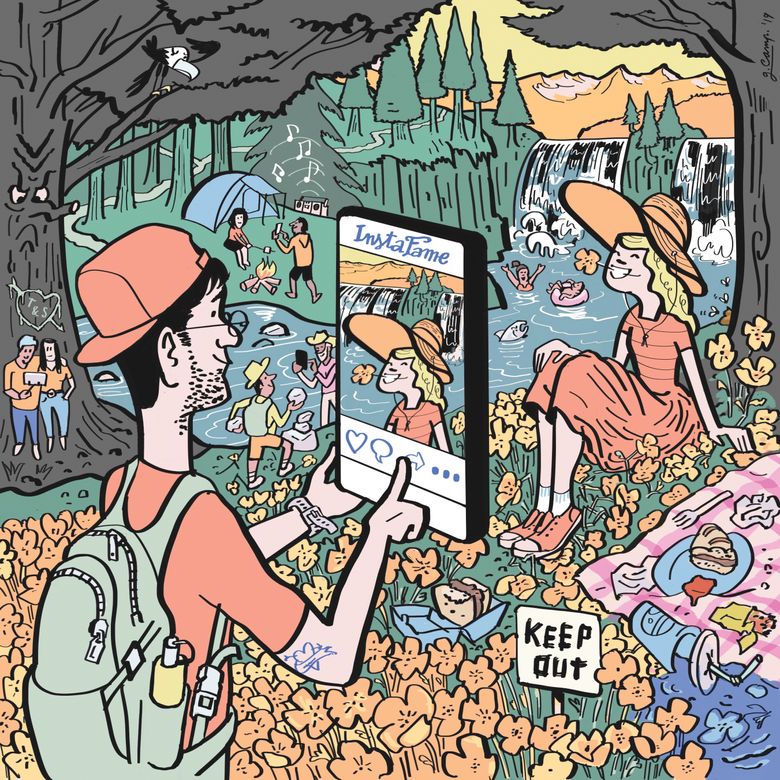 Here’s a “wow” statistic from the U.S. Forest Service: In 2018, wilderness rangers buried more than 400 piles of human waste found scattered throughout the Enchantments near Leavenworth, which, minus the poo, is one of the loveliest wilderness destinations in all of Washington.

A bonus “wow”: The Enchantments camping zone, because of its immense popularity, is equipped with nine privies, all intended to make improper plopping avoidable. Nevertheless, on more than 400 occasions last year, according to a Forest Service spokesperson, visitors decided to plop with impunity and just walk away.

What is going on?

“It’s unbelievable how much surface pooping is going on out there,” said Craig Romano, a year-round hiker and author of 20 hiking guides for The Mountaineers Books. “I’m coming across it in places I never expected, even remote areas. I find it in the middle of a trail. And toilet paper. Streams of it! What I’m seeing is incredible. It’s absolutely disgusting.”

Romano believes outdoors etiquette violations have increased substantially over the last five years as, perhaps not coincidentally, social-media use has exploded.

Social media’s ability to attract swarms of visitors to picturesque meadows and alpine lakes has presented a new challenge to keeping natural spaces looking even quasi-pristine.

“I don’t think anybody anticipated social media — a year ago, or five or 10 years ago — to be what it is today,” said Dana Watts, executive director of the Leave No Trace Center for Outdoor Ethics. “There’s no question it’s having an impact. It is something we’re very much paying attention to.

“The first time I heard music on speakers in the backcountry, I thought, ‘This can’t possibly be.’ Now it’s very frequent, and people are blasting it,’ ” Romano said.

“I’ve heard people say people who do these things are just ‘hiking their own hike.’ That doesn’t mean you do what you damn well please. Trails are on public property and come with rules and regulations. Roads are public property, too, and we share them with a lot of people. I can’t just drive my own drive. … That mentality astounds me. Trails are being inundated with a lot of new, clueless people right now, and we need a massive public-education campaign.”

Here’s another big “wow.” The Leave No Trace Center for Outdoor Ethics’ website asserts that “nine out of 10 people in the outdoors are uninformed about their impacts.” What can be done to educate them about treading lightly on public lands?

Some outraged citizens have taken the problem into their own hands.

Romano understands why an Instagram account, @PublicLandsHateYou, has attracted nearly 57,000 followers since it launched last July. Operated anonymously by a 31-year-old Idaho engineer who’s fed up with what he considers damaging and discourteous outdoor behavior, the account (and companion website) calls out people — particularly Instagram influencers serving commercial clients — who have mashed meadows and trashed wildflowers in a quest to capture a “top-this” nature-infused image.

Other Instagram accounts have also taken a similar public-shaming approach: @JoshuaTreeHatesYou documented widespread damage to Joshua Tree National Park during January’s government shutdown and trolled Miley Cyrus after the singer posted pix of herself in April posing on a Joshua tree’s arm (which can collapse under stress) while sporting a multihued onesie. Plus there’s @YosemiteHatesYou, @NationalParksHateYou, @UnethicalOutdoors and the Onionlike @Trash_the_Planet.

The means might be crude, but Romano says he can understand why private citizens have taken to social media to right what they see as grievous wrongs.

“This guy is doing it in an unkosher way, and his message is resonating with many folks frustrated by what they are witnessing,” Romano said, referring to the founder of @PublicLandsHateYou.

There are, however, other, more official efforts in the works to try to reverse the tide of disregard for public lands.

The Leave No Trace Center (LNT) is a Colorado-based nonprofit group that for 25 years has promoted minimum-impact techniques for outdoor recreation. LNT’s “7 Principles” are the go-to guidelines used by the National Park Service and other land managers for educating visitors about treading lightly on public lands.

Watts, the executive director, is aware of the @PublicLandsHateYou Instagram feed, but does not follow or endorse it.

“You could maybe get a chuckle out of some of the things he says, but it’s not really in the spirit of Leave No Trace,” she said. “We certainly don’t promote shaming in any way. We want Leave No Trace to become a very positive part of people’s outdoor experience.”

Educating the public about handling the outdoors with care is LNT’s reason for existence, and Watts says it’s a never-ending challenge.

“We feel most people really want to do the right thing when connecting with nature,” Watts said. “It’s just a lot of time they don’t know what that means, or what that looks like. That’s our job, to get that information to them, inform them about outdoor ethics, then allow them to make the decision for themselves — what’s best for them and what’s best for the land, to protect its health and integrity for the long term.

“When people have all that information and they’re choosing to do what’s best for them and the land, their experience is better as a result. It’s a win-win.”

LNT has also placed increased emphasis on educating the public about responsible social-media use.

“The more we can work with people — in particular, more influencers — to be responsible with social media and have a better awareness of what the effects are when they post a certain type of picture, the better,” Watts said “It can be quite damaging. It’s a new phenomena that we’re all kind of wrapping our heads around.”

In 2014, LNT introduced its Hot Spots program, which involves organizing a triage effort for places around the U.S. that, Watts said, “have been loved to death,” places nominated by local land managers or community leaders. “They say, ‘We’ve done what we can, and we need your help,’ ” she said.

The Enchantments Permit Area, hoping to end its poo parade, will be a LNT Hot Spot from July 15-22. The need is understandable. Visitation to the area increased from 19,000 people in 2015, to more than 30,000 in 2018, according to Holly Krake, public-affairs officer for the Okanogan-Wenatchee National Forest.

“The goal is to take an area inundated with use and put it on the road to recovery,” said Watts.

Organizers of the Enchantments project hope their results will mimic the pattern of success that began in 2014 when the San Juan Islands National Monument was an original LNT Hot Spot.

“We think there’s now more awareness of Leave No Trace in our community than usual, by a lot,” said Nick Teague, recreation manager for the monument.

The islands faced problems with off-trail trampling, off-leash dogs, sloppy camping and other issues. Teague says a key first step was pulling together land managers on all levels — local, county, state and federal — under one banner, the Terrestrial Managers Group.

The group created its own customized variation of LNT’s 7 Principles and San Juan County adopted those principles as a government resolution. It was the first county in the U.S. to officially endorse the LNT guidelines.

“That was a huge success,” Teague said. “It was another indication that everyone in the community is working together at every opportunity.”

A local film student voluntarily created a 12-minute, LNT-inspired video, “Minimal Impact.” A two-minute version has played on ferries sailing between Anacortes and Friday Harbor. Teague says the managers  group has arranged LNT training sessions on ferry runs and each year staffs an LNT booth at the county fair.

Perhaps most vital to the cause: Lots of volunteers who keep visitors in line.

“What’s really unique is there are so many folks out here who are incredibly passionate about this landscape and protecting these lands,” Teague said. “There’s a lot of eyes and ears on the land right now. They’re doing their best to engage with folks and share what’s appropriate and what’s the best outcome for the land. We have a whole bunch of people willing to be out there in force.”

“They thank people for having their dogs on a leash, or if the dog does not have one, they will hand the owner a leash they brought with them,” she said. “The American public is much in debt to the locals of the San Juan Islands for how well these lands are managed, because these people put all kinds of energy into it.”

How do volunteers deal with contentious visitors? Use an earthy answer to turn away wrath, Teague says.

“Leave No Trace has done a really good job of figuring this out,” Teague said. “We focus on the authority of the resource and what’s happening to the resource due to visitor behavior. We can talk about songbirds that nest close to the trail and how their patterns might be affected if people or their dogs go off trail. It’s not really about the rules, it’s about how they’re affecting the resource.

“It’s a really good technique,” Teague said. “It doesn’t work in every scenario, but it has a lot of power. It’s definitely an art in applying that on the ground in real time. We have a lot of success by smiling and sharing information.”

Watts likewise believes a considerate approach is better than a combative one. “What we’ve found is, if we can have meaningful interactions with people and provide that ‘why’ — why we’re asking them to follow these principles and guidelines — that really makes a difference when it comes to altering behavior and swaying people to protect the land,” she said.

“What’s in vogue now is how good nature is for you,” he said. “But 30 years ago there was more of an emphasis that hiking in the mountains is a privilege, that people need to respect and protect these sacred places. Now we have this human-centric idea that the mountains are here for me. That thinking affects how people treat the land.”

Even so, Romano — who says new editions of his books include even greater emphasis on low-impact practices to help enlighten trail newcomers — hopes that with broader education (and people actually acting on it), outdoor behavior patterns will self-correct.

“Back in the ’70s, people new to the outdoors were hitting the trails and there was plenty of bad behavior,” he said. “People were pooping in the creeks and cutting down trees to camp and other crazy stuff.

“Then the environmental movement came in … And all of a sudden, wow, there’s less litter on the trails even though more people are out there. People got it.”