With apologies to people like my father, a dyed-in-the-wool New Englander for whom a drive in snow is an utter nonissue, we are not great snow-drivers in the Northwest. I recently faced this particular source of dread in the (snowy, curvy) Methow Valley, but I generally place it among such horrors as navigating Mercer Street at any time of day, or the time I practiced self-arrest on a Mount Adams backpacking trip when I was 14, and realized that yes, you can just fall off a mountain.

So, with snow a possibility in Seattle this week — and a certainty on the passes — I reached out to Laura Adams, senior safety and education analyst for the online traffic school DriversEd.com, which provides web-based courses in defensive driving for adults. Here’s what she told me about staying calm behind the wheel in nasty weather, what to do in a skid and the importance of slowing down.

Drive only when necessary

Adams’ first piece of advice for driving in the snow? Don’t. “All drivers, including newbies, should avoid getting behind the wheel in severe winter weather unless it’s necessary.”

Clear off your car

If you absolutely have to drive under less-than-ideal conditions, “make sure your vehicle is ready.” That means clearing ice and snow from your entire car — “not just the windshield” — because snow “on the roof, windows, lights, or trunk … can make you less visible to other drivers.” It can also slide off once you’re mobile, which will make life harder for drivers around you.

Take time to heat your car from the inside, “which helps de-ice the exterior and prevents your windshield from getting foggy when you turn on the defroster,” says Adams — thus avoiding the nightmarish scenario of losing visibility when you need it most.

Once you’re en route, the key to driving in the snow is to slow down. “Your vehicle has less traction when you’re driving on snow and ice,” says Adams. “No matter if you’re on steep or flat terrain in hazardous conditions, you should slow to speeds below the posted limits.”

So: accelerate, slow down, stop and turn more slowly than you normally would, and give yourself more time to reach your destination than on a clear day. Look as far ahead as you can, and increase following distances so you have longer reaction times if something goes haywire in your path.

Keep your distance, and know what to do if you hit ice

If you’re prone to speeding or tailgating, knock it off in bad weather. “It’s better to arrive late than to drive recklessly and increase your chances of getting into an accident,” says Adams.

My personal snow-driving nightmare is hitting ice and skidding, which Adams says is more likely on “bridges, overpasses and shady spots” that “get icy first and will be the most slippery.” Be cautious in these areas. And if you do lose traction, don’t freak out and hit the brakes; this will only make things worse. “Instead, take your foot off the accelerator and try to keep your vehicle going as straight as possible until you feel the wheels grip the road again,” says Adams.

If conditions are especially icy, you might want to invest in snow socks for your car, a new, user-friendly alternative to chains that slip over the tires to add traction between the rubber and the road.

Wait out the weather

If road conditions devolve to the point that you no longer feel safe or in control of your vehicle — think compromised visibility or heavy snow — there’s no shame in just getting yourself off the road. “Find a safe place to wait for conditions to improve,” suggests Adams.

An ounce of prevention is helpful. Adams recommends having a reputable mechanic assess your car’s winter-readiness, and making sure your tires have strong traction. It’s also a good idea to “consider what you’d need if you got stranded for an extended period” and make sure you have those essentials in your vehicle. (Another good practice is to keep your car properly fueled in winter, since condensation can build up in a partially empty gas tank. This, unsurprisingly, is bad for the car and can affect its functionality — that’s bad news in wintry weather.)

An in-case-of-stranding kit should contain a phone charger, first-aid kit, snow brush and ice scraper, water and energy bars, blankets and warm layers, a shovel, cardboard or kitty litter if you need added traction to get out of a jam, and a flashlight (plus a cache of extra batteries). Stock up. 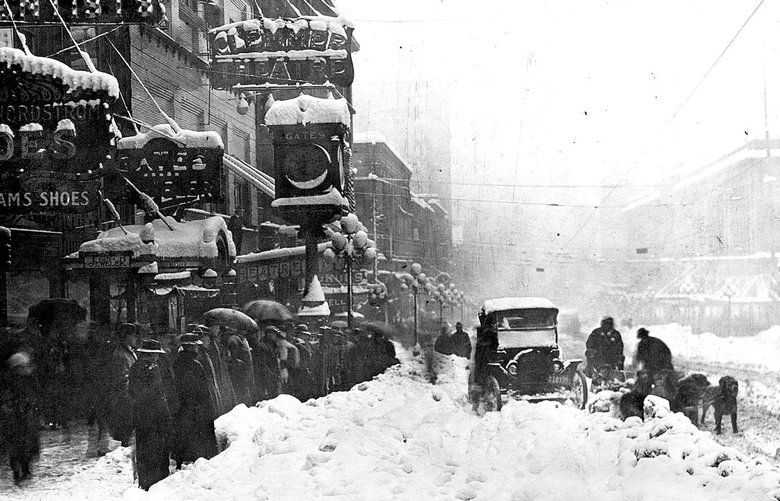 As for the most common mistake drivers make in bad weather, it’s probably not what you’re thinking. “Not staying focused on the road,” says Adams. “Make a promise that you’ll avoid distractions — such as talking on the phone, texting, watching videos, vaping, using social media, eating, shaving and putting on makeup — while driving. The consequences of driving drunk, drugged, drowsy or distracted could be deadly.”

As for facing my own fear, when I finally turned the ignition, rolled slowly down a snowy driveway and merged onto the winding, two-lane highways of the Methow, I realized, as I chugged steadily along, that snow-driving wasn’t so bad after all. In fact, the biggest problem I faced was filling up at an old-timey gas station in the charming cowpoke town of Winthrop. The gas tanks were adorable, but not particularly functional, and only filled the car up partway before petering out as if they’d had enough exertion for the day. I asked for assistance from an older gentleman behind the counter, and then was on my way, plodding slowly through the pines and snow-dusted rock faces like it was no big deal.