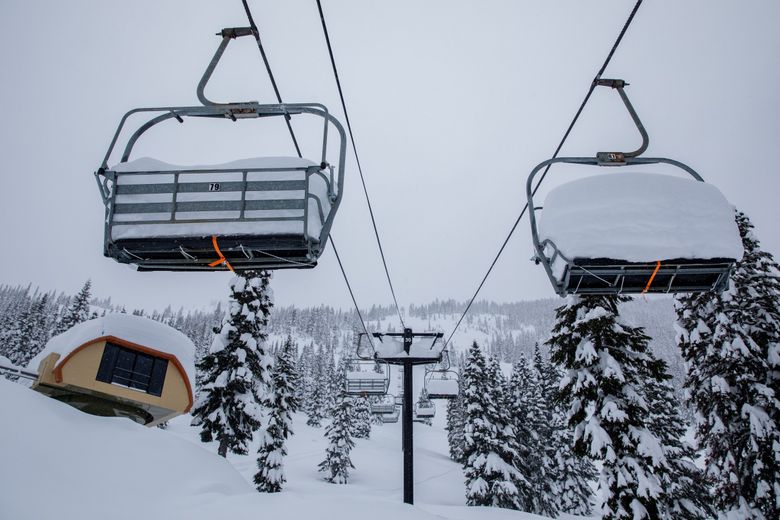 Chairs on the Southern Cross chairlift at Stevens Pass buried under deep snow last week. Southern Cross is one lift that has not opened this year due to staffing shortages. (Jennifer Buchanan / The Seattle Times)
By
Gregory Scruggs
Seattle Times staff reporter

STEVENS PASS — If Stevens Pass Ski Area reopens as planned this week after the extended, avalanche-related closure of Highway 2, owner Vail Resorts will be digging out from more than just heavy snowfall.

Nearly one month into the ski season, customer complaints have reached a fever pitch as over half of the mountain remains closed due to inadequate staffing, which has led to unplowed parking lots, long lift lines and bare-bones amenities.

On Dec. 24, 2021, just 10 days into the season, Stevens Pass General Manager Tom Pettigrew issued a public apology for Vail Resorts’ inability to run the ski area at full steam despite more than sufficient snow coverage. Over two weeks later, in an interview with The Seattle Times, Vail Resorts Western Region senior vice president and chief operating officer Doug Pierini said the company still cannot open the remainder of Stevens Pass’ chairlifts, including those serving the mountain’s popular backside trails, even as every other ski area in Washington’s Cascades has been mostly open since the Christmas holiday week.

On Jan. 12, Vail Resorts announced that Tom Fortune, currently general manager at Heavenly in South Lake Tahoe, California, will serve as the new interim general manager at Stevens Pass, the ski area where he began his career in the industry.

This sluggish start to a ski season with record snowfall has angered many of the Washington residents among the record 2.1 million people who purchased Vail Resorts’ season pass product, the Epic Pass, under terms that required them to pay before the season began. The state attorney general’s office has logged at least 53 consumer complaints against the ski area and Vail Resorts since the season began.

“They either need to get the terrain open as soon as possible or refund passes,” said Jeremy Rubingh, author of the Change.org petition “Hold Vail Resorts Accountable,” in a phone interview with The Seattle Times.

Rubingh, a commercial fisher and documentary filmmaker who has skied Stevens Pass since 2008, struck a chord with his petition, which has more than 38,000 signatures as of Tuesday. It calls on Stevens Pass to fully open the mountain by Jan. 15 or refund Washington residents 60% of the cost of their Epic Pass purchases. The percentage corresponds to the 60% of terrain that remains inaccessible to lift-serviced skiing.

“We are working as hard as we can,” Pierini said. “But I can’t give you a date right now.” He declined to comment on the issue of refunds.

“Those of us who are longtime Stevens passholders feel like we have been robbed of what used to be a great ski area,” said Chris Roslaniec of Seattle, one of dozens of customers who wrote to The Seattle Times via email.

“There are a lot of unique characteristics that make it a challenging resort to operate,” Pierini said Jan. 6, the day every Washington Cascades mountain pass closed due to hazardous conditions. Stevens Pass remained closed to traffic through Tuesday.

“Candidly, I think our staffing challenges hit Stevens Pass harder than any other resort,” said Pierini, whose company owns 40 ski areas across 15 states and three countries. “We are more challenged there than anywhere else.”

Pierini said the staff shortage at Stevens Pass caught the company by surprise. “We felt pretty good about how we were going into the season,” he said. Pierini attributed short staffing over the holiday season to the omicron variant of the coronavirus, which led employees to quarantine due to exposure or positive test results. But Pierini also admitted that more new hires are required to run Stevens Pass at full capacity.

Reporting by The (Everett) Herald suggested that inadequate wages and rising housing prices along the Highway 2 corridor are dampening local enthusiasm to make a grueling mountain pass commute, whether by car or employee shuttle, for minimum wage, although Washington has seen a lower labor market quit rate than other states. Pierini touted Vail Resorts’ July announcement of a $15 minimum wage as “our single biggest investment” in the offseason. Washington’s minimum wage is $14.49 per hour. On Monday, Vail announced a $2 per hour bonus for employees who stay on through the end of the ski season. The announcement came hours after the Park City ski patrol union voted to authorize a strike.

“We are hiring not only locally but all over the country and trying to come up with creative ideas on how we can bring more staff,” Pierini said.

Short staffing has been a chronic problem this season across Vail’s portfolio, according to The Colorado Sun, which has also documented employee discontent with impersonal management practices, like a human resources app in lieu of an on-site manager with institutional knowledge of a ski area’s inner workings.

“They just bought three ski areas while they can’t even run this little one in Washington state,” Rubingh said. “There’s a lot of mistrust built up.” On Dec. 31, Vail Resorts announced the acquisition of three ski areas in Pennsylvania. Vail reported $1.5 billion in cash on hand in its December earnings call.

Last season, Vail Resorts told The Seattle Times that Stevens Pass could house 65 on-site employees. The company declined to provide an updated housing figure for this season, a breakdown of how many staff members commute along the Highway 2 corridor, current staffing numbers or the amount of staff required to open the resort fully.

“People are concerned about losing their mountain culture,” Rubingh said. “In order to address that, they have to hire people and offer a wage so that people can actually afford to work there.”

Queued up for the Seventh Heaven chairlift on Jan. 3 to survey the situation at Stevens Pass, I encountered an unfamiliar sight: The lift operator was wearing a bright red uniform with a white cross. The liftie wasn’t a liftie at all. Rather, a ski patroller was loading skiers and riders that day.

“I don’t believe patrollers running lifts is common in the industry, but it is not unprecedented,” wrote Jake Radak, Stevens Pass Professional Ski Patrol Association president, via text message last week. “We have always been trained to support lift operations, but this definitely takes it to another level.” Radak indicated no staff shortages among ski patrol. In December, the ski patrol union ratified a contract with Vail Resorts after two years of negotiations, under which patroller pay starts at $15, $16 or $17 per hour, depending on experience level.

Ski patrol staff notwithstanding, I observed a skeleton operation. Stevens Pass was open, but well short of full steam as I have experienced on previous midweek, midseason powder days. Over half of the chairlifts were not running despite a deep snowpack, from Kehr’s at the base area to Tye Mill and Double Diamond at midmountain and both chairlifts serving Mill Valley, the mountain’s backside. I checked with ski patrol who confirmed that the chairlifts were dark not because of avalanche danger nor other natural hazards, but due to insufficient staff to operate the lifts.

Once ski patrol lifted restrictions on uphill travel for the day, my partner and I explored the ridge between Cowboy and Big Chief mountains, the two peaks under which the marked trails at Stevens Pass unfurl. We passed a succession of dormant chairlifts. As the empty chairs swayed in the wind, saddled with feet of snow when they would normally be filled with skiers and snowboarders, I had the impression I was hiking through one of our region’s abandoned ski areas. The experience was like visiting a skiing ghost town. Back at the resort base, I found spartan lunch options, a closed tuning shop and an empty Foggy Goggle — the après-ski bar at Stevens that has yet to open this season.

Who’s in and who’s out

Stevens Pass’ diminished operations have collided with a season pass deal that seemed too good to be true.

In March, Vail Resorts surprised an industry known for ever-escalating prices by slashing the price of its season pass by 20%, which meant Washington residents could secure unlimited access to Stevens Pass with no blackout dates for as little as $583. I asked Pierini if the trade-off from a price reduction was a reduced product.

“We want everyone to enjoy skiing and be able to afford it,” he said. “It’s not a trade-off that a cheaper pass equals a lesser guest service.”

Pierini insisted that Vail’s self-described push for inclusivity is not simultaneously excluding Stevens Pass’ most ardent fans, who have skied the mountain for years if not decades and in some cases rearranged their lives — work schedules, jobs, places of residence — to ski there in the winter.

“Inclusivity is everybody. It’s the first day beginner all the way up to the lifelong skier or snowboarder,” Pierini said. “We are not looking to cut back on certain terrain because we can offer a beginner or intermediate product.”

Rubingh disputed the company’s claim that dedicated season passholders feel included in Vail Resorts’ playbook when the company fails to open over half of the mountain one month into the season.

“What do you lose if you leave out of the equation people who are invested in this sport and have designed their lives around mountain culture and skiing?” he said. “You lose your reputation, for one.”

As Stevens Pass continues to lag as the most acute case in the Vail Resorts’ portfolio with no clear end in sight, Pierini empathized with the company’s critics.

“I totally get why people are frustrated,” he said. “I’m a skier at heart. I want the mountain open, too.”

Editor’s note: This story was updated at 11 a.m. Jan. 12 to reflect the hiring of Tom Fortune as Stevens Pass interim general manager.