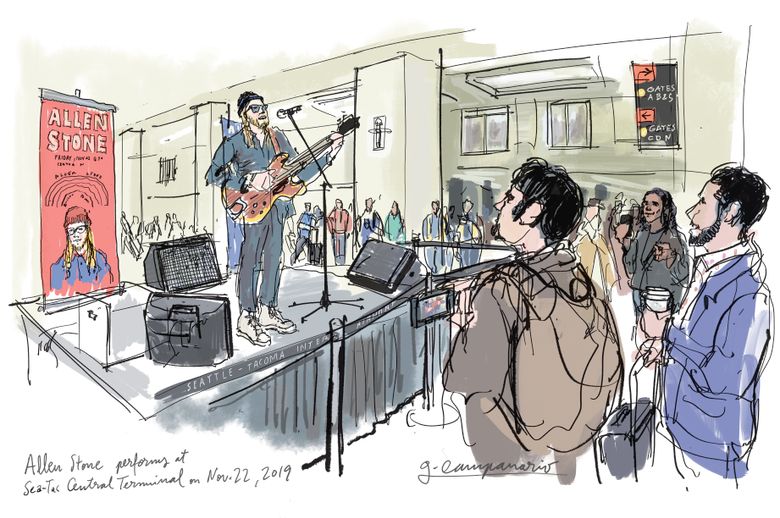 Airline passengers milling around Seattle-Tacoma International Airport’s central terminal on a recent Friday afternoon were treated to a surprise concert by Allen Stone.

Stone’s show was part of the Port of Seattle’s “Experience the City of Music” initiative. Per its website, the Port of Seattle has aimed to “showcase the diversity of music culture in the Northwest and enhance the traveler experience” at Sea-Tac since 2012.

Although hundreds of local musicians have entertained weary travelers at their gates since the airport — in conjunction with Port of Seattle, the Office of Film + Music, Seattle Music Commission and PlayNetwork — launched the program, Stone is the first big recording artist to perform live at the terminal.

The 32-year-old soul and R&B singer from Chewelah said Sea-Tac is a special place in Seattle because “it gives visitors the first glimpse of what the city is all about.” Earlier in his career, Stone recorded one of the greeting messages that can still be heard through the airport’s overhead speakers.

For a brief half hour, Stone’s upbeat melodies filled the concourse and gave travelers a moment to relax. He played “Brown Eyed Lover” and “Give You Blue” from his new album, “Building Balance,” and he had wise parting words to his audience of travelers: “Don’t miss your flight!”

Musicians play every day from 9 a.m. to 3:30 p.m (check out the schedule here). The Port of Seattle plans to expand the airport music program with several permanent stages, so I’ll be paying more attention to the lineup of performers next time I travel.