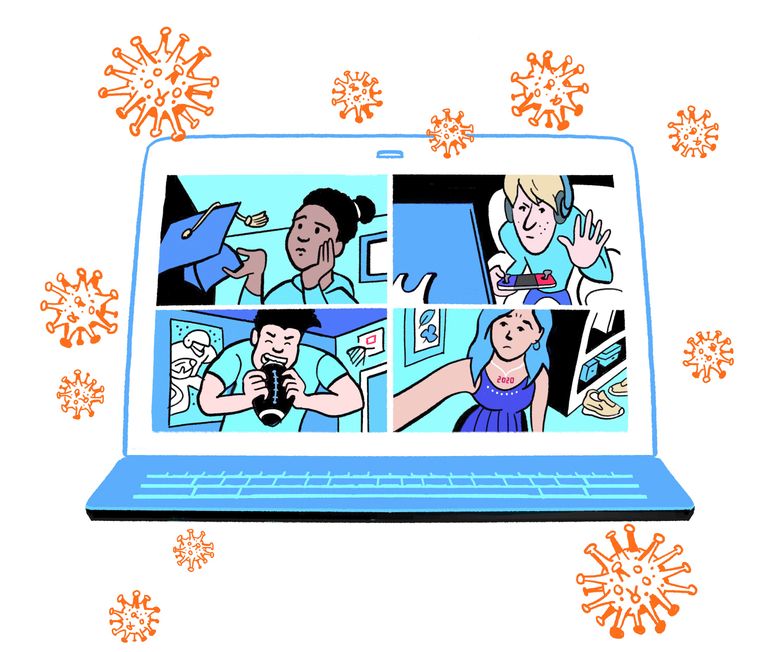 During these pandemic times, Liliana Lengua has three teenagers living in her home, and all three are super bummed.

Her oldest is finishing out her freshman year of college in her parents’ house, not her sorority house. Her 17-year-old should be getting ready for graduation, but is missing out on that and a lot of other awesome things. And her 13-year-old bought a beautiful new dress and shoes for an eighth-grade graduation she’ll never attend.

As a professor of child psychology and the director of the University of Washington’s Center for Child and Family Well-Being, Lengua is uniquely qualified to handle all the problems and emotions hurled her way at home every day. But it may comfort all you parents of teenagers out there to know that even she struggles to keep a lid on everything.

“It’s definitely a roller coaster,” Lengua said. “And even with my training, I’m in the same boat. My kids will say that me being a child psychologist does not necessarily make me a better parent.”

The teenage years are an emotional time under the best of circumstances due to all the changes adolescents go through. Add in the disappointment, uncertainty and disruption the coronavirus pandemic has brought and Seattle’s health professionals are seeing teens struggling at a much steeper level than usual.

With graduation, spring trips, parties and celebrations, music and math competitions, sports and pretty much everything else canceled, there are a lot of emotions flying around at home these days where many of us are staying with our children 24/7.

While the average 5-year-old loves uninterrupted time with mom and dad, teens are in an entirely different headspace and are reacting in unusual ways. This has led to an unprecedented level of friction in many homes.

“So laying on top of what teens are already doing, which is trying to push us away a little bit — and that’s developmentally appropriate — they’re also probably struggling with regulating their anger and frustration,” Lengua said. “And I think for parents it can be challenging to understand why this is so troubling to our kids. We often hear parents saying — and I’m also guilty of saying — ‘I know this is hard for you, but think of the people who have it even harder.’ And honestly, that doesn’t help our kids feel better at all.”

We talked to a number of educators and experts — all parents — to find ways for you and your teen to reach détente and survive the summer. Here are some ideas:

Health and parenting writer Nancy Alton is thankful she doesn’t have a full-time job: “I’d be screwed.”

All of Alton’s extra time is being consumed with helping her children — a senior and an eighth grader. There is online school (which she feels she’s being asked to teach in many instances with little help from teachers) and all the missed activities you’d expect for children their age and the resulting flow of emotions.

She has found that empathy and understanding, rather than impatience, is the appropriate response to most emotional outpourings.

“We were learning guitar before this, but now it’s too hard,” Alton said. “And I know it’s too hard because it’s too hard for me. So, I no longer practice. I’m like, ‘You know what? Do what you want.’ Because none of us have enough energy. And if you’re passionate about making edits for Instagram, I’m not going to stop you right now. Your passion will lead to something good.

Alton has also tried to take the pressure off herself. Small victories are the goal.

“Like you’re going to remember that 15 minutes on Easter when you bought your kids iced coffee from the neighborhood coffee shop and then read out loud from a book,” Alton said.

“Fifteen good minutes is enough to carry an entire day, especially with a teenager who doesn’t probably want to see you more than 15 minutes. The pandemic doesn’t really change that.”

Sherri Hubel teaches a Zoom class full of fifth graders at Lockwood Elementary School in Bothell. You’d think it would be chaotic. But she has a secret weapon.

“I have the mute-all button,” she joked.

If only home life were so easy. After years of complaining about going to school, most kids are finding they desperately need the structure it provides. Teachers aren’t there to answer their questions, work is often project-based and open-ended.

Hubel says K-12 kids have been “catapulted into college mode almost … and their brains aren’t ready to handle that. So I think we didn’t realize quite the importance of schedule and routine.”

To that end, Hubel found that keeping her own kids on a schedule has led to, if not happiness, a sense of steadiness in her family’s world.

“We wake up at the same time every day, which is much earlier than their first online lesson, just to keep a routine,” she said. “Instead of going to bed late and waking up late, we’re trying to keep the same school routine, same bedtimes and same wake-up times. We schedule where we’re all free from 11 to 11:30 to have a break and we try and play outside, jump on the trampoline. And then everybody gets off their devices and we take a scheduled lunch from 12:30 to 1:30, which is a definite silver lining, to just be home and be present instead of at your place of work.”

Older kids may chafe under such structure, though. Dr. Annie Hoopes says it may work better to set general guidelines for the day for them, and allow them to make their own decisions.

“What I’ve been coaching my parents and teens to do is really remember that teens really value their autonomy and their independence, and that’s been taken away from a lot of them,” said Hoopes, a pediatrician who specializes in adolescent medicine at Kaiser Permanente. “So finding ways to allow them to feel like they have some control over their day-to-day schedule, whether that’s where they choose to put their schoolwork into their day or time that they have that’s reliably private and uninterrupted is important.”

Hoopes also thinks sleep is an underrated part of the equation. Teens should be getting 10 hours of uninterrupted sleep a day, ideally when it’s dark outside.

“I’m definitely seeing some kids who are up all night online gaming and sleeping all day,” Hoopes said. “And that is not something that allows for face-to-face time with family or getting outside. And that can be a way that kids are maybe avoiding accountability or avoiding contact with family if they’re feeling like they don’t get any privacy. So I would talk to your kid about what you’re noticing, what you’re worried about in terms of why that pattern is negatively affecting their health and well-being and talk to them about how to shift their schedule a little bit so that they’re up for some of the daylight hours.”

If those things aren’t helping, your teen may be taking things harder than others. Recognizing this, rather than blowing off the signs, is important.

“These key once-in-a-lifetime milestones have been canceled or postponed, so they have this feeling of incompletion or listlessness and sometimes that’s even kind of creating a lack of motivation, right?” Hoopes said. “Like, ‘What’s the point of me doing anything if these things that I’ve been working towards didn’t work out?’ ”

If you’re having trouble pushing your teen out of this rut, it’s probably time to seek outside help. Just the simple act of having your teen talk to another adult might help because teens don’t often see their parents as social equals.

“It depends on the student, it depends how resilient they are, what support services they have in their life already,” Maupin said. “Some students have never experienced this level of anxiety before and because they’ve always been, let’s say a good student, and all of a sudden now they don’t have access to all the tools they had.”

Even while services are shut down, doctors and therapists are increasingly turning to teletherapy, Maupin said.

And across the board, everyone urges parents to tackle these problems aggressively. This may very well be our new normal for a long time.

“I think it is really questionable whether they’re going to open school in the fall, or whether it’s wise to,” Maupin said. “So I do think right now is an opportunity to say, ‘OK, this is where we are right now. Let’s learn some skills. Let’s learn some habits that can carry us through this very difficult time.’”

Chris Talbott is a Seattle-based writer and editor.
Advertising