Carol G., a baker of 40 years longstanding, is having issues with biscotti. “I like to bake my own biscotti,” she wrote, “and my problem is that when I have to slice the baked loaf and then put it back into the oven, the loaf crumbles a lot. Do you know of anything I can do to make the loaf not crumble quite so much? Am I not allowing it to cool long enough before slicing it? I don’t mind eating the broken pieces, but I sometimes like to give homemade biscotti as a gift, and broken-up baked goods don’t seem quite appropriate.” 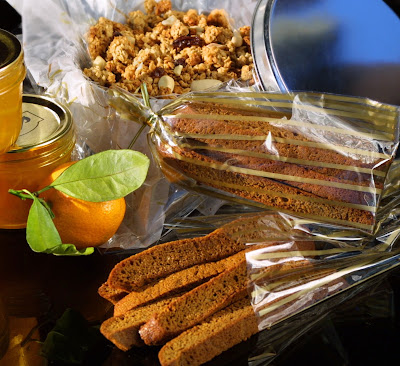 As much as I love biscotti — and baking — I have to admit I’ve never made the stuff. So I called my best pal and chief biscotti-maker, restaurant critic Providence Cicero, on Carol’s behalf. Prov thinks she may have a solution to those humble crumbles. If you let the loaves cool, that could well be the problem: she slices hers while they’re still hot from the oven. On the other hand, she suggests that depending on the recipe, too much or too little shortening may be the culprit. Her recipe for “Nonni’s biscotti” — passed down from her Tuscan grandmother, Mary Poli — calls for a tablespoon of Crisco, something Providence’s mom (the marvelous Rosemary Cicero) insists must not be left out.

Anybody else have a theory? We’re all ears.

Providence was generous enough to share her family recipe. Each year at Christmas, she makes a mountain of biscotti and always gifts my husband Mac with a tin full — in honor of his Christmas birthday. If I’m nice, he lets me have some. And now, seeing as I’ve got the recipe in hand, I don’t have to be nice, I just have to get baking.

Mix together flour, baking powder, baking soda and salt and set aside. In the bowl of a large mixer, cream the butter, Crisco and sugar. Beat in eggs and vanilla. Gradually beat in the flour mixture until smooth. Add nuts.

Divide the dough with your hands (it will be very sticky) and shape it into four logs, two per cookie sheet. Each log should be about 1 1/2 inches wide and not too high. Bake for 20-30 minutes until light brown. Remove from oven. Cut each log on the diagonal into 1-inch slices. Turn each slice on its side. Bake for 10 minutes more. Turn each piece over and bake for another 10 minutes.