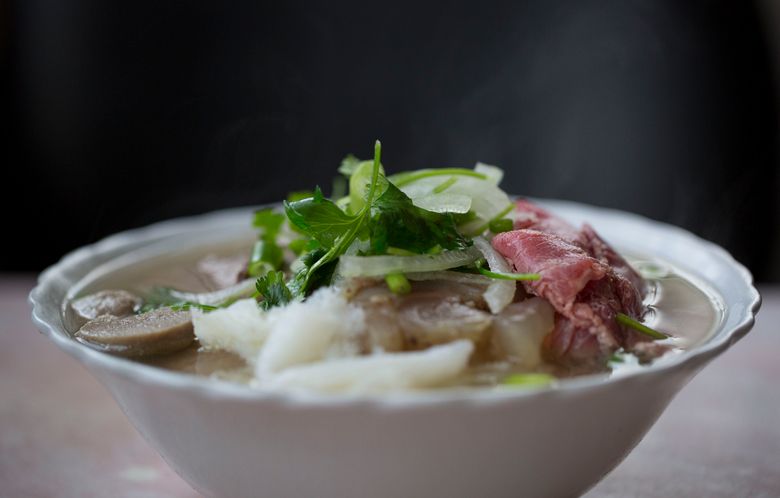 Pho is a staple in Seattle and King County, in part because Washington is home to the third-highest number of Vietnamese immigrants in the country. Here's a brief history and eater's guide to the region's favorite soup-and-noodle dish.

We see a lot of gray in these parts. Chances are, it’s raining or will be soon. But the Northwest has just the thing to cure your gloomy weather blues: pho (pronounced “fuh”), a delightfully hearty soup-and-noodle dish, one of the staples of Vietnamese cuisine and a local favorite. Lucky for us, the Seattle area is privy to a whole lot of pho restaurants spread throughout the region — a Yelp search renders 66 pages of results.

Moving to the Northwest? Find everything you need to know about neighborhoods, food and local lore in one place.

Why is pho such a thing here? As of 2014, Washington state had the third-highest number of Vietnamese immigrants in the country, and King County had the sixth-highest of the nation’s counties. The community grew significantly after the end of the Vietnam War in 1975, when then-Washington Gov. Dan Evans welcomed refugees to the state. The Vietnamese community has expanded from about 450 pre-1975 to nearly 70,000 as of 2015.

Pho Bac, said to be Seattle’s first pho restaurant, was born in 1982 on the corner of Rainier Avenue South and South Jackson Street. Though it started as an American sub shop called “Cat’s Submarine,” increasing requests for pho from the growing Vietnamese community caused the restaurant to switch to serving pho full time several months later. Fast forward to today, and Pho Bac has three sites (with another, called “Pho Bac Sup Shop,” on the way) and pho has become an integral part of local cuisine.

For a closer look at this popular dish, we enlisted the expertise of Yenvy Pham, one of the owners of Pho Bac, to help guide us through the anatomy of the pho dish for those who may be less familiar with its awesomeness. (Note that while the ingredients pictured below are from Pho Bac, most are available at any pho restaurant.)

Her advice to first-time pho diners? “Definitely go with the classic,” with steak, brisket and/or meatballs, then branch out from there. Always taste the broth first, then add sauces if necessary and adjust to your taste. And beyond that, choose your own journey. “Whoever eats it has their own twang,” she says.

Five best Seattle pho spots — and how to eat it correctly