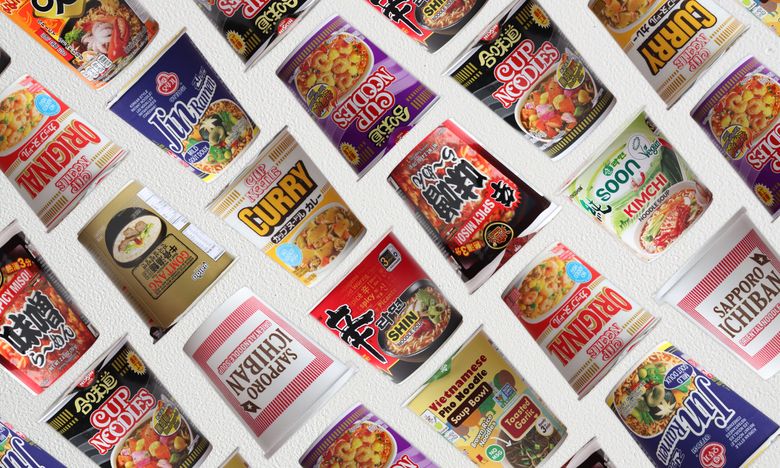 The concept might be unfathomable to today’s broke dormitory dwellers and sick kids left home alone, but there was a time when instant cup noodles did not exist.

Well, in fact, lots of things have changed in the half a century since 1971, but if nothing else, you can still get a cup of noodles for a meager price at your neighborhood grocery store. (These cups cost between $1.19 and $2.30.) And in Seattle, with a neighborhood grocery store like Uwajimaya, you can get a whole bunch of flavors of plastic-foam-bound noodles and compare and contrast over one very salty afternoon in the name of journalism.

That’s what we did.

Armed with sarsaparilla sodas and bananas to cut through some of the saltiness, and in celebration of 50 years of the OG Cup Noodles, we ransacked an aisle at Uwajimaya and tried a dozen different cups of noodles to figure out the best broth and noodle combo that (very little) money can buy. Here’s what we found out.

Jenn: Nice black pepper flavor but I was really missing the crab. Which is sad. I had higher hopes. Despite the sodium content, it didn’t taste overwhelmingly salty. The noodles were decent.

Trev: These were pretty tasty, not too much spice. This cool, black cup gets more points for marketing than for actual flavor. The tiny bits of crab meat are a little bit sad, but the noodles had a nice consistency and flavor. Our designer and photographer Steph suggested that more seasoning might make for better noodles. Overall a nice specialty flavor of the original Cup Noodles.

Jenn: I was really looking forward to this one and my taste buds weren’t disappointed. It tasted more like a curry noodle stroganoff versus a brothy cup of noodles. An enticing aroma and yummy chunks of potato and veggies. I’d put this on the higher end of the instant noodle range.

Trev: Not your average Cup Noodle, this flavor is one I hadn’t seen before. (Also, yes, this is Cup Noodle, no “s.”) Not as much broth as you might expect with a Cup Noodle plastic foam, but the curry flavor was a nice change of pace. Yummy potato chunks and veggie bits accent this other “premium” Cup Noodle variety.

Jenn: This smelled really savory but the actual taste was blah. Where’s the miso? I wanted more umami in this cup, but it missed its mark. The only cool thing about it was the mini foldable fork that came with it.

Trev: This was the first cup that got a big thumbs down for me. As Jenn said, didn’t meet the hype of its smell. This cup had an overly salty broth that didn’t have much of a distinct miso flavor, plus bland noodles. Of course, at the end of the day, we are grading noodles prepared in plastic-foam cups. But this was a loser for me.

Jenn: This was a comforting cup. I think it balanced a nicely seasoned broth with good chunks of meat and the veggies rehydrated well, too. The noodles were a nice consistency and still had a bit of spring to them. I’d pick this up for a quick meal or snack on a cold day.

Trev: It’s hard to beat the original, that white cup packed as much with nostalgia as noodle, though some of that preference is likely just brand recognition. Nice chunks of meat in the steamy broth, this cup was easy to eat — pure comfort food, with a soothing taste and plenty of veggies mixed in. Will not let you down when you are sick, drunk, tired and/or broke.

Jenn: Even though we tried a few varieties of the OG Cup Noodle brand, there were some issues with this one. The idea of rehydrated seafood kind of freaks me out and the shrimp in this were just tiny and sad. The broth could have been more tangy and flavorful. The noodles were decent, but this was no substitute for a good tom yum soup.

Trev: The little baby shrimps in this cup were also a little disheartening. Not that I expected big ole prawns. But, context-free, just sad-looking lil shrimp nuggets. There was OK spice to this cup, though with the literal flames drawn on the front, I wouldn’t have minded a bit more kick. Another marketing win: I was sold on the pretty purple cup. Noodles were the winner here but ultimately this didn’t live up to the hype.

Jenn: Ahh. This. This is what everyone at the table expected from an instant noodle soup in a plastic-foam cup. The smell was nostalgic, like a homemade broth. The noodles were soft but not mushy. The veggies were surprisingly plump. I could have slurped down the whole cup.

Trev: This one is exactly what comes to mind when I think of cup noodles: plastic-foam container, pullback lid, ready for that vending machine lifestyle. And the classic does not disappoint. The veggies rehydrated well, the taste was just salty enough without being overwhelming, and I finished the cup wanting more. That is significant because we were a half-dozen cups deep. The perfect quick-fix noodle.

Jenn: I did not like the noodles at all. They were almost grainy and a bit gritty. I thought it was because they were whole wheat, but other cups use the same flour, so who knows? The kimchi flavor was there, though, and I would have been just as happy to sip the broth alone. But I’m not going out of my way to buy this again.

Trev: This was a divisive cup of noodles in our taste-testing group. I thought the broth was among the best we tried all day — tangy kimchi taste, a dash of spice — but the noodles didn’t meet the same standard. Scrawled among my notes as we suffered salt headaches: “almost cardboardy.” Good broth though.

Jenn: Meh. That’s it. Not offensive. Not memorable. Not the dollar’s worth of goodness I will ever go to again.

Trev: My initial notes: “Clear broth, little smell, inoffensive taste.” But this boring cup of noodles ended up among my lowest-ranked options the more time I spent with it. I found few upsides. You, sir, are an insult to reheatable noodle dishes encaged in foam.

Jenn: I was intrigued by this new-agey sounding cup, but it was such a letdown. It took too long to cook. Even after four minutes, the rice noodles were a little tough. For something boasting toasting garlic, this broth was so, so bland. Your paper cup may be compostable, but that’s where the contents belong, too, in the bin.

Trev: We’re not even sure this cup should have been included in the competition. It was a sort of reheated, ready-made pho, which seemed more ambitious than the humble cup noodle. Sure enough, our toasted garlic noodles were doomed to fail. Very boring. Brown rice noodles didn’t reheat quite as well as the typical instant-ramen-style noodles, and the flavor overall was unimpressive.

Jenn: The weird thing about this cup was that it looked cool with its royal blue and bright yellow label and picture of soft noodles layered with veggies, but it was quite boring. I couldn’t really get a distinctive aroma from this one, although the broth had a bit of a mushroom flavor. Otherwise, not unique.

Trev: Another case of better marketing than payoff with this cute blue cup of noodles. Classic ramen flavor, mild flavoring, not so much spice — not bad, but not particularly exciting. Perfectly middle-of-the-road Korean-style instant noodles.

Jenn: I wanted this to hit me with aroma, but the spice came more with the aftertaste. The noodles were soft and palatable, but nothing about this screamed “gourmet.” Next.

Trev: Chewy noodles with a nicely spicy broth. Good flavor, but not overwhelming or particularly distinct. I think this cup suffered from the fact that we were nearly a dozen cup noodles deep and my brain had doubled in mass due to new salt reserves. There were not enough sarsaparilla sodas in the world to quench my thirst. God forsook me; I needed a nap. And less noodles.

Jenn: This was not the spicy seafood thriller I was expecting. It had a nice smell and surprisingly chewy noodles, but that’s about it. I feel I was duped by the marketing again.

Trev: This Spicy Seafood number had a smooth broth for sipping, with a pleasant, enticing smell that wafted out of the package. The noodles were chewy, the presentation was simple. While some other cups packed a bunch of veggies or other ingredients into the package, this cup had no chunks of food, which worked in its favor. Just some nice noodles and spice. Back to basics. Not shabby.