It’s 9 a.m. on a Tuesday and Guy Fieri is on the phone. You might know him as the “Diners, Drive-Ins and Dives” dude. The one with the spiky blond hair, the classic cars and the penchant for driving — then diving — face-first into gutbusters like the ham-and-egg-stuffed “Chinese pancake” at Seattle’s Voula’s Offshore Cafe. When we talked, he was six shows into his month-long, 21-city culinary rock ‘n roll roadshow, set to park at the Moore Theatre December 11 (ticket info here). 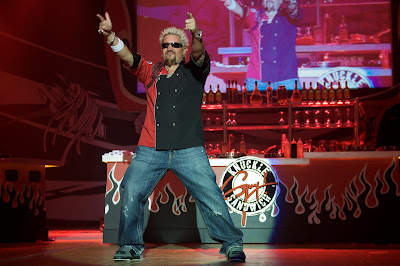 And no, he hadn’t had enough coffee yet when I asked:

Q: Where are you?

A: In a car in L.A. going to do voice-overs for Triple D [that’s shorthand for the show that made Voula Vlahos, among other local restaurant owners, a national sensation], then it’s off to a whirlwind of attorneys — the price is right! — and I’m flying to Milwaukee.

Q: You hawked pretzels from a three-wheeled bicycle cart as a kid. And later you studied as an exchange student in France. So I have to know: When it comes to mustard, what’s your squirt: French’s, Gulden’s or Grey Poupon?

A: As a kid, with my Awesome Pretzel business it was French’s all day long. You can’t get away from that color. For a traditional deli sandwich, you go with Gulden’s. But [after] living in France, it’s Grey Poupon. It’s impossible to choose. If you looked in my fridge you’d see maybe 12 different mustards.

Q: While on the job, you down a lot of sloppy eats, and you do it a lot less delicately than, say, Giadia DeLaurentiis. So, give us the low-down on how to keep the drips and dribbles off our bowling shirts.

A: With messy food, or foods with a lot of sauce, you do “The Hunch.” I learned it in Philly, watching the dudes in suits eat cheesesteaks. You keep your elbows above your hands because if you don’t, the grease runs down your sleeve to your elbow. [Oh, and by the way] Contrary to popular belief, I eat all types of food. Fried food is my least favorite.

Q: Has Clorox asked you to be the spokesperson for their bleach pen yet?

Q: Quick! Give me some variations on one of your oft-used descriptors: “funky.”

A: If it tastes really good and it’s funky, it’s funkalicous. If the guy making it is funky, he’s funkintacious. This [fill in the foodstuffs] is the manhole cover on Funkytown Boulevard in Funkytown! I don’t rehearse anything on the show, words just come out.

Q: If your last name was Webster, how would you define the word “dive”?

A: When the reputation of the food and environment far supersedes any consideration of visual appeal.

Q: I noticed you’ve got dice tattooed on your upper arm. Any food tats?

A: My biggest is my culinary gangsta, my big skull chef with the hat. I’ve got a great tattoo we’re working on now: a mechanical scorpion made out of kitchen equipment I’ll be getting over Christmas.

Q: As the face of regular-guy food, you eat a lot of strange combos: pizza with chili and Cheez Whiz, more overburdened burgers than anyone should ever have to consume. What we see is the “Um, um good!” reaction. How often do you have to fake it to make it?

A: First, I’ll never lie to you. I’ve walked out of places in the middle of filming a show because it hasn’t worked. Second, you have to evaluate things in their own criteria. I ate a pig ear sandwich and I wouldn’t eat it again, but that’s considered a delicacy by some people, so you take a bite of it and discuss it. That’s how I have to objectively look at things. I don’t want you to come walking up to me in the street and say, “Hey jackass! What was that with you telling me it was a great Philly cheesesteak when it wasn’t?”

A: What are you, Alan Funt? It was a 1976 Datsun 280-Z, metallic brown, a sweet car with 75,000 miles on it. It cost $3700 and I had it for seven months. Then, one night when I was coming home from my girlfriend’s house, I fell asleep at the wheel. There was no drinking, nothing, I was 18 and I was just tired. I went up on the sidewalk and plowed into a telephone pole. I was heartbroken.

Q: Your riff on the fame game?

A: I don’t have to do this. I can always go back to restaurants and cooking [he co-owns three Johnny Garlics “California pasta grill” locations, and two Tex Wasabi’s Rock n’ Roll Sushi BBQ restaurants]. I miss my family and right behind that I miss cooking. I’m at the age where things with my kids are the most important thing to me. We were in the mountains [in Northern California, where he lives with his wife and two sons] for Thanksgiving, with 10 families and all these RVs, cooking the whole time, using barbecues and three-burner stoves. I watched my 13-year-old son cook chicken Parmagiana for 35 people with his little sous-chefs — who are 10 to 15 years old. That was my favorite meal.

A: When I met AC/DC last year, but then that was eclipsed by seeing Lynyrd Skynyrd with my son and my buddies. In the middle of “Sweet Home Alabama,” Johnny Van Zant came over to the side of the stage, grabbed my son and took him to the center-stage. My buddies had to hold me up like a fainting mom. My son lays out the rocker hand and throws his tongue out. It was awesome.

Q: What are you selling at your culinary rock ‘n roll roadshow that we can’t get watching Food Network re-runs?

A: My dad asked, “What are you going to do? Sing? Play the guitar?” I told him I’m going to play the griddle. [Yes, cooking is part of the act.] Motley Crue is not coming out to make creme brulee, and I’m not singing. When friends come to my house there’s a lot of people cooking, there’s music playing, they’re acting out — it’s a garage band of food. I just took what happens at my house to the stage [a set, he notes, with $150,000 of equipment carted rock-band-style, “in a full-blown semi”]. I’ve brought in DJ Cobra from LA and put him in a 7-ft booth. The audience is way involved in this endeavor. Sometimes it’s a big Q&A, sometimes they’re throwing things on stage or coming on stage, sometimes I’m in the audience. If you enjoy food, enjoy life and embrace the energy of rock and roll, this is a show for you. I tell people they should be tailgating before they come to this event.

A: I have to go old-school: Rolaids.