Rick Sakoda was beside himself when he wrote to me last week with this happy news:

“The much loved and sorely missed Abruzzi’s pizza has been reborn in Normandy Park! Yes, it’s the same Abruzzi’s with that incredible and mouth-watering pizza which so many of us loved! Nick Finamore’s ex-wife, Mary Lou and daughter DeAnn have opened their now-1-year-old pizza parlor in Normandy Park. I sincerely hope you feel this great bit of news is worthy of a short article or some sort of press. I myself have been there twice in the last week since I found out about them, and am happy to report that the pizza has that unmistakeable taste, smell and delicious bite that made the original in Seattle famous. I was one of many who was devastated when the orginal place was torn down to make way for Niketown and I’m hoping you could please do what you could to give this incredible place a deserved shot-in-the-arm to boost the public’s awareness.” 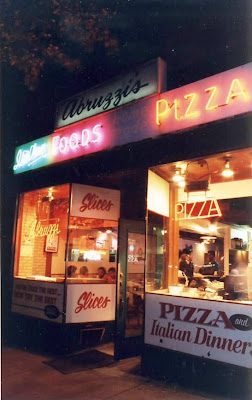 So I called Rick to chat about Abruzzi’s, and here’s what he told me: He got turned on to the place back in 1970 — though the pizzeria at 604 Pike Street had been around since 1956. “When I first started going here, the grandpa, Angelo, Nick’s dad, ran it. He was tossing the pizzas. Then Angelo pretty-much retired. It was kind of a dive, but the pizza was incredible. Nick’s ex-wife waited tables there. I’d go in there so often, when I walked through the door, Nick would start making my pizza. He didn’t even have to ask me what I wanted.”

Rick went to Abruzzi’s one last time, in 1994, the last week it was open. “I brought a pizza home and froze it. It was in my freezer for four months and then I couldn’t stand it any more, I missed that taste too much, so I ate it. I thought I’d keep it for posterity. When it was torn down, Nick was thinking about relocating, then he got ill and died of cancer,” he recalls. “I’ve been to many pizza places since then, but it’s a flavor — their plain cheese and sausage pizza — that was just phenomenal.” And that, said Rick, was that. Until a couple of weeks ago when his wife was looking through some ads in the paper.

“She saw one for Abruzzi’s and the next day I went down to Normandy Park and ordered one. It had the same taste. The same combination of cheese and sauce and that unique texture. Mary Lou had all the old recipes! She looked at me and said, `I remember you!'”

So, anybody else out there have fond memories of Abruzzi’s? Let’s hear ’em. Then do as Rick suggests, and get yourself down to Normandy Park. Mary Lou has a pizza with your name on it.

[Special thanks to Ty Graham, for the photo of Abruzzi’s.]