Skip to content
By
Moira Macdonald
and
Bethany Jean Clement

These days, we (Seattle Times restaurant critic Bethany Jean Clement and arts critic Moira Macdonald) have had to get a little creative with our long-running joint venture that is Dinner at a Movie — our evenings of BLTs and Caesar salads and Manhattans at the multiplexes have long been on hold. So we were excited to hear about the Full Moon Feast: a special family meal offered by the Taiwanese restaurant chain Din Tai Fung, intended to be enjoyed while watching the Netflix movie “Over the Moon,” a new animated musical about a contemporary Chinese girl who builds a rocket to the moon. Sold! We ordered our feasts, queued up our Netflix and happily dove in.

Moira: The Full Moon Feast is, in my non-food-critic opinion, a LOT, in a nice way. It arrived in an enormous tote bag, filled with smaller tote bags, filled with various containers of food and extracurricular activities (including a Build Your Own Rocket Shooter thing that left me cold; more on that later), and I thought it was great fun to have so many different dishes to try. I made particularly short work of the jidori chicken fried noodles, the shrimp fried rice and the extremely delightful Kurobuta pork xiao long bao, which Bethany explained were really soup inside a twisted little dumpling. Soup inside a dumpling? What magic is this? The very best part, though, was eating with Bethany, whose FaceTimed face was on the iPad parked in front of my plate.

Bethany: Meanwhile, I was eating straight out of the to-go containers like an animal, with Moira beaming from my phone next to my Full Moon Food-Mountain. This is eight dishes — cucumber salad; sweet-and-sour baby back ribs; Kurobuta pork xiao long bao; shrimp and Kurobuta pot stickers; jidori chicken wontons; jidori chicken fried noodles; garlic string beans; and shrimp fried rice — plus two samplers of buns (!). It costs $115 and would probably feed six, or you’ll have leftovers for literal days.

Speaking of things leaving one cold, some of it travels much, much better than the rest. Xiao long bao should not ride in a car on the way to your mouth. But Moira had never had them — “My mind has been blown! The world is a strange and glorious place!” quoth she — and her innocent enjoyment jolted me out of food-snobbishness and let me enjoy them too. Key: Do not think of them as soup dumplings; the broth inside has congealed.

The real fail here, though: all of the buns in both the Savory Bun Sampler and the Sweet Bun Sampler. So heavy and gummy, where the dough should be puffy and light … tragic little leaden things.

Moira: Sadly, it has to be said: Our buns were sweaty. (A sentence I have never typed before.)

Bethany: It’s true — the buns had exuded moisture on their journeys to our respective abodes, creating an extremely unappealing condensation-situation inside their to-go containers.

Moira: The buns — eight different kinds — were also color-coded with little dots, but there was no explanation as to which was which. This dinner requires bun-codebreaking.

Bethany: My kingdom for a bun-key! I’ve never typed that before either. Also, what about some moon cakes? None at all in the entire food-pile, when they should win Best Supporting Actor in “Over the Moon.”

Moira: Also, my food-mountain was missing a dish. Then again, it was the dish Bethany liked least, so maybe I got lucky.

Bethany: Mmmmm, yes: the chicken wontons, all cold and stuck together. Moira also dodged a green-bean bullet — adorably, she hates any and all cooked vegetables, and these merited disdain if not hatred, being overcooked, under-garlicked and not up to Din Tai Fung standards.

Moira: There is a limit to what I will do for the citizenry. The beans looked nicely green, I’ll give you that. But I could spot the mushiness from across the room. Begone, mushy things!

Bethany: We both loved the super-fresh, slightly spicy cucumber salad. There was lots to enjoy! And the sheer bounty made the whole experience exciting — opening box after box, tasting this and that together over FaceTime. But I’d suggest choosing your own 117 dishes — ones that you know you’ll like and that’ll travel relatively well. And skip the Bun Samplers.

Moira: The bounty also included activity kits, which had existential “Moon Chat” questions on them to ask during dinner (“You can bring only one item in this room with you on your adventure. What would you bring?”). These were fun! There’s a kit with which to make the aforementioned Rocket Shooter, and I am sorry to say that perhaps it takes the collective brain power of a family of four to assemble this thing, because I tried solo and failed miserably. Stupid Rocket Shooter.

Bethany: I suggested we each get a bottle of bubbly. Recommended! Sparkling wine pairs as well with a myriad of dishes as anything will, and we had the best time. We both kept pouring more — why the hell not? — and laughing and eating, for, well, a couple of hours.

Moira: It made me think of the Before Time, when Bethany and I used to sit in bars after having terrible food at a movie theater. Someday, friend, we’ll do it again.

Bethany: Yes! And meanwhile, this made for a perfectly lovely substitute. The headache the next day was entirely worth it. And there were leftovers to help with that. I loved it when you told me about the weird, unexpected beauties of watching the Pacific Northwest Ballet remotely.

Moira: We have to take our joy where we can find it these days. And drinking with you is always a joy!

Bethany: I also loved when we, tipsy, got around to answering the kiddo questions in the Moon Crafts kit and got all sentimental. That’s what friends and bubbly are for. And it’s especially precious, like you say, nowadays.

Moira (singing): “That’s what friends are foooooor … ” (For the record, the only bubbly I have had at this moment of writing is Diet Coke.)

Bethany: The movie, however, seemed more geared toward cannabis than Champagne. For the grown-ups, I mean!

Bethany: All those animated kids’ movies that supposedly also appeal to adults? They bring out my inner cynic. I strongly suspected that “Over the Moon” would not be my cup of tea. But it started very sweet, with a space dog, a bunny lamp and lots of neat moon mythology. Also, for reasons I won’t spoil, I found myself teary-eyed pretty much straight away. I do have a heart! So that’s good! The cuteness continued tolerably for a while. Then it all got very bizarre and baffling. And the singing style — sort of soprano-soaring, which Moira said was like “Wicked,” with which I’m thankfully unfamiliar — got on my nerves.

Moira: I would like that bunny lamp, right now. Home accessories aside, I have seen MANY movies like “Over the Moon,” in which a kid goes on a journey and learns that there’s no place like home, or something like that. This one is firmly in the middle of the pack, in terms of quality. The beginning is charming, right up to when young, grieving Fei Fei (voiced by Cathy Ang) builds a rocket and heads off to find the Moon Goddess (Phillipa Soo, of “Hamilton”). Then … well, maybe we needed a different kind of edible. The colors of the Moon Goddess’ magical kingdom were insanely bright; the images sometimes puzzling (were her multicolored subjects . . . gumdrops? Peeps? Cough drops?); the action at times impenetrable. Though I liked the giant space frogs. But things became lovely again for the ending — I too have a heart, and got a bit weepy — and I think kids would enjoy the action and brightness.

Bethany: The end was nice! It’s just the whole (long) middle where they’re on the moon that seems kind of like a bad acid trip — that army of sentient Peeps, a gang of chicken bikers, maybe an eel attack, a new glow-in-the-dark character just because, a rap-battle table tennis match. And the Moon Goddess gets really mean!

Moira: The food in the movie was delightful though! I loved watching an auntie expertly crack a crab. And we learned that “the circle of a moon cake is the symbol of a family coming together.”

Bethany: I wanted their Moon Festival feast as much as a person can want to eat cartoon-food! It looked so much better than sweaty buns.

Moira: As Bethany says, you might be wise to skip the Full Moon Feast and just pick and choose what you like best from Din Tai Fung’s menu. But it’s a treat, at any size. I’m excited to try the dumplings again, but maybe in-house.

Bethany: Someday, proper soup dumplings will be ours! I’ll take you to Mama Dough in Kent — their xiao long bao are better than Din Tai Fung’s. But the latter’s Feast, at least, represents high-variety fun at a time when our home-cooked dinners are never going to have so many different dishes. I wouldn’t recommend “Over the Moon” for grown-ups … but you could park the kids in front of it (the too-much-screen-time ship has officially sailed, right?) and drink bubbly with a friend over FaceTime.

Moira: Shall we do it again tonight? Cheers!

“Over the Moon,” streaming on Netflix beginning Oct. 23.

Related Previous installments of Dinner at a Movie 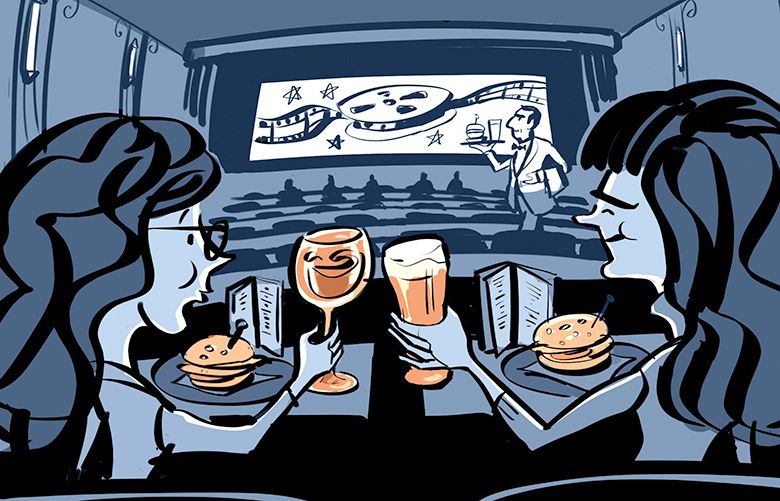 Advertising
Moira Macdonald: mmacdonald@seattletimes.com; on Twitter: @moiraverse. Moira Macdonald is The Seattle Times arts critic.
Bethany Jean Clement: 206-464-2050 or bclement@seattletimes.com; on Twitter: @BJeanClement. On Facebook: facebook.com/bethany.jean.clement; and on Instagram @bethanyjeanclement. Bethany Jean Clement has written about food, restaurants, and the people and cultures intrinsic to them for The Seattle Times since 2014.
View Comments
Posting comments is now limited to subscribers only. View subscription offers here. For more information, visit our FAQ's.