After weeks of calculation, consideration and speculation, the Spady family today announced the location of their sixth Dick’s Drive-in. And the winner is (yes!) — the city of Edmonds. 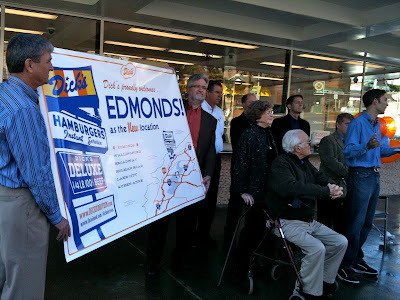 The Spady clan making the big announcement today, in Wallingford.

Celebrating the occasion — and his 87th birthday — founding father Dick Spady joined his family at their Wallingford drive-in this morning where nephew (and company VP) Ron Schmeer broke the news at a press conference.

The sixth Dick’s, expected to open late next year, will stand on the northwest corner of Highway 99 and 220th street, in the northeast corner of the TOP Food & Drug parking lot: which is both good news and bad news for me, seeing as I’m a TOP Food Edmonds regular, and that corner is three minutes from my front door. 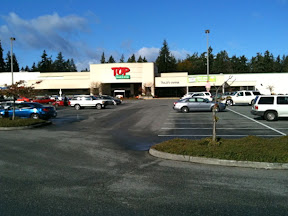 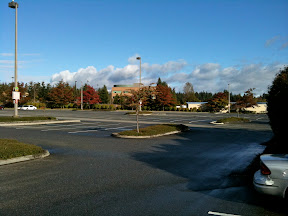 Get your burgers, shakes and fries here! — but it’ll be a while. Dick’s No. 6 will soon be built in the northeast corner of the TOP parking lot in Edmonds (photo, right).

It’s been more than half a century since the first Dick’s made its debut in Wallingford (1954), later joined by Seattle stores on Broadway (1955), Holman Road (1960), Lake City (1963) and Queen Anne (1974). With further expansion plans finally afoot, the Spady clan conducted an on-line poll to determine their next move. Burger lovers north of Seattle cast 56,810 votes, taking the win over their compatriots in the South End and on the Eastside, but the Edmonds store won’t be the last.

“We want those who voted South and East to know that we heard their voices also,” pronounced company vice-president Jim Spady in September. “If the new northern Dick’s is a success, the next two Dick’s Drive-Ins will be built in the south and east regions.”

Dick’s wife Lou says she and her family will be honoring Dick with a birthday lunch at an undisclosed Wallingford restaurant. The couple, who raised their family in Lake Sammamish, today live only a block from their original store. 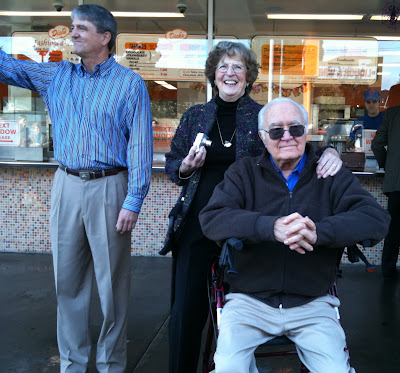