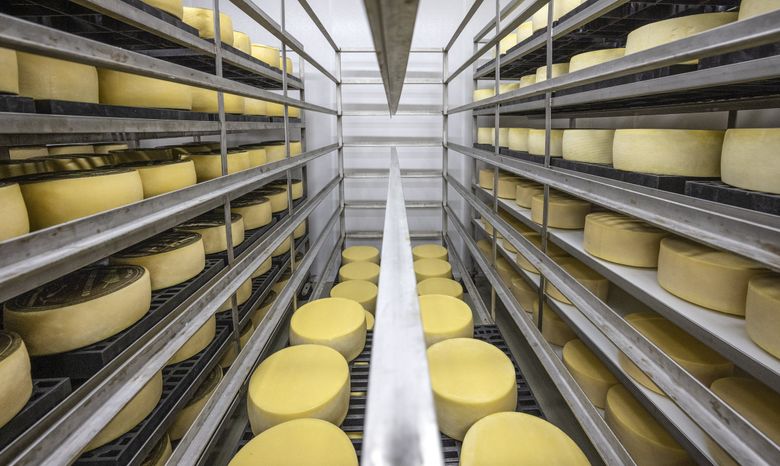 Cheese is a risky business, yet WA's cheese-making scene is on the rise Here's why these cheesemakers are taking the leap

It’s warm and humid in the cheese-making room at Ferndale Farmstead, a low-slung red building on a rural road in Ferndale, Whatcom County. Whey is draining directly onto the floor from elevated tubs filled with curds and whey — the drains leading to an exterior whey tank — as curds pour into large, rectangular Italian drain tables on wheels. Nearly a dozen cheesemakers, dressed in white from hairnets to rubber boots, move with purpose. They’ll make 3,500 pounds of Fior di Latte today, each cheesemaker lifting the equivalent of tens of thousands of pounds of fresh mozzarella throughout the day as they move the cheese through different stages of production.

“Cheese making is a concentration of milk,” Daniel Wavrin, head cheesemaker, yells over the din of machinery, as he gestures to the agitators, which look like upside-down pitchforks, sloshing through the milk, perpetually separating the curd from the whey.

Wavrin comes from a dairy family. His dad Bill Wavrin and uncle Sid Wavrin started a dairy farm in Eastern Washington in 1990. Bill is also a veterinarian, a scientist at heart who can monologue about the benefits of a closed-loop system — even in a spitting rain while standing on the banks of a manure lagoon — with unbridled passion.

Their creamery in Mabton, Yakima County, is affiliated with Darigold, meaning all their milk is sold under that label. Bill was tired of the anonymity, and in searching for a way to connect with consumers in a more direct way, the Wavrins purchased the farm in Ferndale in 2009. Once the farm was acquired, they needed a product.

“We didn’t really know what it looked like. Daniel said ‘cheese’ and we said OK,” Bill says, with an almost imperceptible shrug.

To be clear, while cheese is a simple recipe — milk, salt, culture and enzyme — it is not easy to make on a commercial scale. It’s labor intensive, ingredients are expensive and results aren’t guaranteed.

Starting a cheese business at the behest of your then 19-year-old son seems like the intersection of money and opportunity.

But then again, “nobody gets into cheese making for the money,” Courtney Johnson, executive director for the Washington State Cheesemakers Association, says.

That doesn’t mean cheesemakers can’t achieve success — or even fame. Beecher’s, Cougar Gold and Cascadia Creamery are all beloved, longtime Washington cheese brands. But starting up as a young new cheesemaker is risky and expensive — and it takes a while to get your feet under you and gain confidence. Yet Washington is seeing a rise in new cheese companies.

When thinking of a food product that can offer a “taste of place,” people often think of wine. But talk to any cheesemaker about their product and that’s one of the key things they’ll tell you.

“That translation of sun, rain, grass, the animal finally, is one of the most special ways to taste a region, taste an area, taste quality,” Daniel Wavrin says.

Cheesemakers talk about their product in terms of “art” and “craft.” There’s reverence for the milk and the animals that provide it. Cows are named, goats are spoken about with love.

But cheese making is an expensive art form. And if you’re not making fresh cheese, the aging time means there’s no money coming in while that cheese sits on a shelf.

“It’s why we don’t have a ton of really long aged cheese in Washington. Rents are high,” Johnson says.

And despite the costs and risks, the Washington artisan cheese scene is growing rapidly. Currently there are 52 licensed cheesemakers in the state, making it the second-largest cheese-making state in the western U.S., behind California.

“Let’s see what this milk can do”

Johnson quotes Heather Paxson’s 2012 book “The Life of Cheese: Crafting Food and Value in America” to describe how there are generally two types of people who get into cheese making. “Either someone with an agricultural background or somebody who had a successful career in a high stress environment and starts a passion project. It’s the resource of having access to land and then the resource of having money,” Johnson says.

The Wavrins had cows and land. Once he decided he wanted to venture down the road of cheese, Daniel Wavrin toured 40 facilities across the nation, gaining direct experience from cheesemakers. He worked at Mt. Townsend Creamery in Port Townsend to further learn the ins and outs of cheese making. He sought out a mentor, Italian cheesemaker Raffaele Mascolo, and worked with Mascolo to build the cheese-making operation from the ground up, ultimately focusing on Italian artisan cheeses.

Rachael Taylor-Tuller, owner of Lost Peacock Creamery along with her husband Matthew Tuller, was a military veteran who was feeling her “soul sucked away” by the cubicle she was sitting in in corporate America. She says chickens were her gateway to goats, which led to cheese.

“What job can I have where I just get to have all the goats? I was like, I know, I’ll start a goat dairy. It was so dumb. I had no idea what I was doing,” Taylor-Tuller says with a laugh.

It took Taylor-Tuller two years to get her 11-acre farm in Olympia licensed. She milks 48 goats twice a day, and while in the beginning there were lots of tears and wasted product — “we made all the mistakes,” she says — Lost Peacock is in its sixth season of producing yogurt and cheese and she’s making a living. She’s also expanding her line, adding hard cheeses to their current line of fresh cheese.

“We’re dipping our toes to be like, ‘let’s see what this milk can do.’ We’re now hitting our stride and making some really good food,” Taylor-Tuller says.

Fitting the bill as the cheese-making type with an agricultural background, Virginia and Stacy Thomas of Clover Mountain Dairy in Chewelah, Stevens County, are first-generation dairy farmers who added cheese to their product profile about a year ago to prolong the milk harvest from their small herd of jersey cows — each named for a different flower. There’s Buttercup, Rose, Daisy, Carnation, Arrowleaf, Dandelion and Sunflower, plus Dodie, named after a beloved aunt who loved cows.

“In a lot of different farming enterprises, you have a harvest, and the harvest is the end of the crop or that beef animal. With dairy cows you have a partnership that lasts years. There is a beauty and a very fulfilling nature of that,” Virginia Thomas says.

The Thomases learned by trial and error, reading books and asking for mentorship from other cheesemakers, like Umapine Creamery in Oregon. They started with feta and cheddar cheese curds and expanded to Monterey Jack, pepper jack and Gouda. Production is set to ramp up this season due to a grant they were awarded from PCC Community Markets to build a cheese cave. The temperature-controlled room where they’ll be able to age and store cheese will be built inside their existing barn.

“Because it’s an independent process on our farm, [the cheese is] going to develop from every tiny thing we do. It can never be the same as anybody else’s farm. I love that uniqueness,” Thomas says.

Lindsay Slevin of Twin Sisters Creamery fell in love with cheese after working in food service and retail.

“Cheesemakers were my rock stars,” Slevin says. In 2012, she became one of the first American Cheese Society Certified Cheese Professionals and immersed herself in books on the art of cheese making. In 2013, she convinced her husband Jeff that they could make cheese and they applied for a business license, finally opening Twin Sisters (named for their twin daughters) and releasing their first blue cheese in January 2016.

Ferndale Farmstead, Lost Peacock and Clover Mountain are all farmstead cheesemakers — meaning they raise the animals they milk to make the cheese. Twin Sisters, on the other hand, has a direct partnership with Twin Brook Creamery, using the milk from Twin Brook’s herd of Jersey cows to make their cheese.

And while it’s risky, none of them have had to do it alone. Not only can an aspiring cheesemaker hire a consultant, in Washington bigger, more well-established cheesemakers often support and mentor young cheesemakers just starting out.

“Beecher’s was our very first customer. They sold our cheese in their market. And it was like, OK, that’s so cool. Like, who does that? But they want Washington cheese to grow,” Lost Peacock’s Taylor-Tuller says.

Whether escaping cubicle life or with a background in agriculture, whether dealing in goat cheese or cow, the one thing these newer cheesemakers — all of whom have been making cheese under their own label for less than a decade — have in common is passion.

“These [goats] are our co-workers. These are the souls we share our days with. You have to be in it for the passion, otherwise it’s too hard,” Taylor-Tuller says.

That doesn’t mean they never thought about giving it all up.

Slevin and her husband were told when building Twin Sisters to settle on a budget, double it, and add 50%. “That’s exactly what happened. But once you’re in it, you can’t go backwards. It’s like crossing the Rubicon, there’s only one direction and you have to get it completed, get it licensed and start producing,” she says.

The Slevins make blue cheese, which must be aged for two months minimum before it’s ready for consumption.

“You’re going in blind, producing cheese that you can’t even sample for two months to see if you can sell it,” Slevin says. In the beginning, she says she felt like she wasn’t even a cheesemaker, just really good at following a recipe.

“But as we ran into our own challenges and difficulties, then we learned how to be cheesemakers. It was through the problems and the losses,” Slevin says.

It’s still very much hands-on. Jeff Slevin got his milk hauler’s license; he drives direct to Twin Brook to pick up milk and drives it the 12 miles back to their production facility where he and Lindsay are making cheese within an hour.

Each of these cheesemakers is looking at the risks and the costs and deciding to do it regardless. Despite all those odds, it’s an exciting time to be a Washington cheesemaker. Crossing the Rubicon earns you camaraderie — a network of fellow artisans where you can pick up the phone to talk rennet, milk, pricing or equipment.

“When I hear another one is opening we’re just totally rooting for them. When we lose one or two we all get nervous,” Slevin says.

There’s a gentle clanging in the barn at Ferndale Farmstead. The cows push their heads in and out of metal headlocks, munching a specialized mix of feed Bill Wavrin designs specifically depending on each cow’s needs; a mix of grasses they grow plus legumes, corn and canola. The cows are hand-milked twice a day, and spend the rest of their time lounging on beds of sand, which Daniel jokingly refers to as “the beach.”

When the Wavrin family feeds you, Bill says the cheese has their whole hearts in it. And while it’s not feasible to have all the food in the world produced by small, specialized farming operations, “it’s cool.”

“And the reason it works is it makes you feel a little good too.”