You haven’t lived till you’ve tasted my husband’s “famous” chicken: 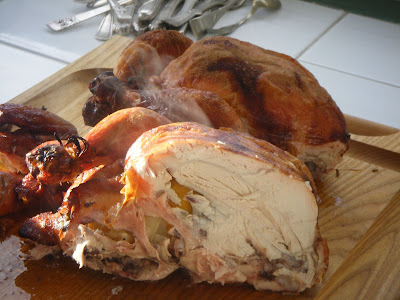 He’ll tell you, “It’s not my chicken, it’s Captain Bay-Schmith’s,” and then he’ll tell you the story about the first time he tasted the best chicken he’d ever eaten. He won’t be exaggerating either, because the Captain’s recipe is also the best chicken I’ve ever eaten. Even better than the whole roasted chicken at Le Pichet, which I adore. And the chicken wrapped in proscuitto at Crow, pictured below, which I ate — again — last Friday night: 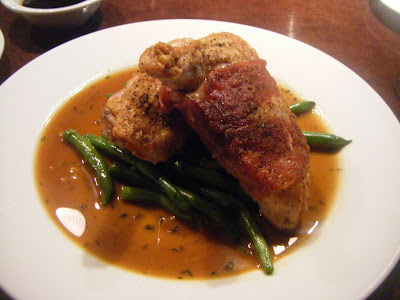 Captain Bay-Schmith — a retired sea captain, taciturn Dane, talented artist, Mandolin player and lover of Gammel Dansk — was Mac’s next-door neighbor long before I moved into our house. One night, before I came on the scene, the Captain’s wife, Mary, called and invited Mac to dinner. “Sorry,” he said, “I just brought home some Thai food,” “Save it,” she insisted. “Jan’s roasting a chicken.” “What’s so great about his chicken?” Mac asked. “Nobody makes a better chicken than Jan,” she said. So Mac went. Turns out Mary was right. And in the nearly 20 years since, my husband has perfected the recipe, which I’ll share with you because it’s way too simple and entirely too delicous to keep to ourselves.

For this easy dinner you’ll need a chicken. Or two. We always make two, using broiler/fryers: 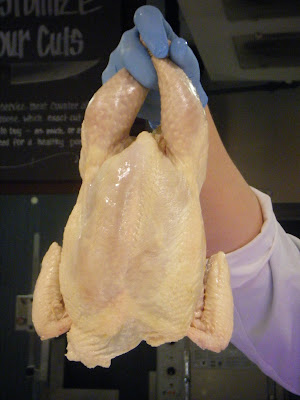 I insist you make two because this is great “company” food, and because the leftovers are spectacular. You’ll also need a medium onion, a lemon, several large lettuce leaves (Mac says iceberg works best, but whatever you’ve got on hand will do). And, oh yeah. The secret ingredient: 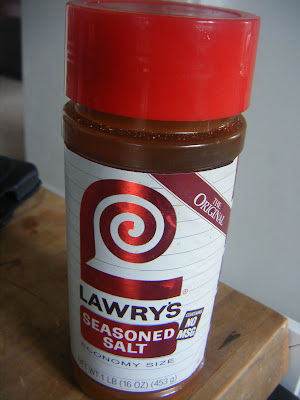 Hey! Don’t knock it till you’ve tried it, OK?

Now, set up your barbecue grill. And forget about using a gas grill: It will seriously lose something in the translation. You’ll need a generous chimney of coals, heated till they’re white-hot: 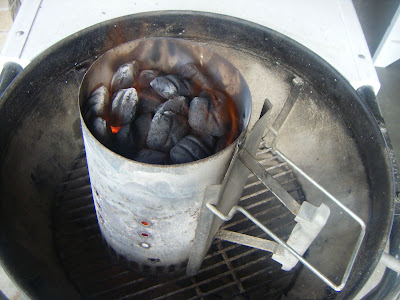 While they’re heating, prep your bird(s). Rinse them, pat them dry — but not too dry — and stuff the cavity with half an onion and half a lemon per chicken. Truss the legs with kitchen twine or use a couple of toothpicks to close the cavity. Then completely dust them with the Lawry’s Seasoned Salt: 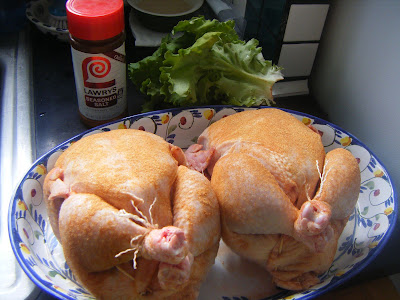 Let the chicken sit for a bit while you go out and prepare the grill. (The Lawry’s will get somewhat pasty from being in contact with the moist chicken: that’s the way it should be.) If you’ve got those little basket thingamajigs in your grill, great. If not, distribute the hot coals around the perimeter: the chicken requires indirect heat. 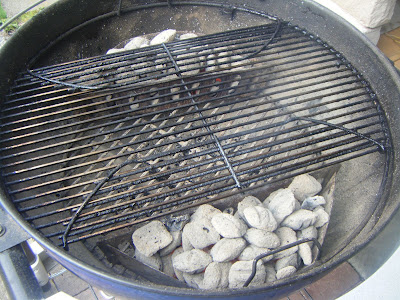 Mac always puts some “green” cuttings from our fruit trees (apple or cherry) in the baskets. It adds a distinctive smokiness and if you don’t have any, go scavange for some! 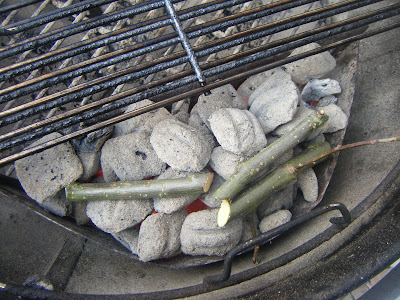 Position the chicken(s) in the middle of the grill: 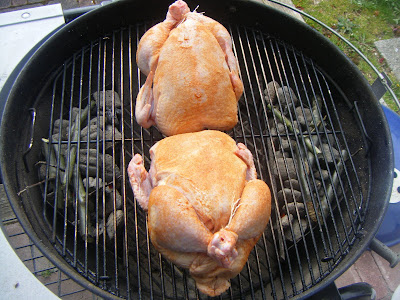 Then cover them with the lettuce leaves: 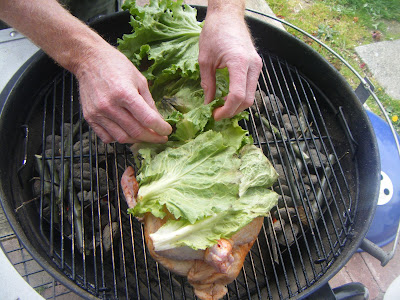 Put the lid on the grill, making certain the vent is open on both the top and the bottom. Now go have a beer, read a book, or do as I did and make some fresh buttermilk rolls. But don’t disturb the birds. Let them roast in there for about 40 minutes before taking off the lid and removing the lettuce leaves. The chicken will still be kind of white, and where the lettuce wasn’t covering the bird it’ll have a deep, dark Coppertone tan. No biggie: 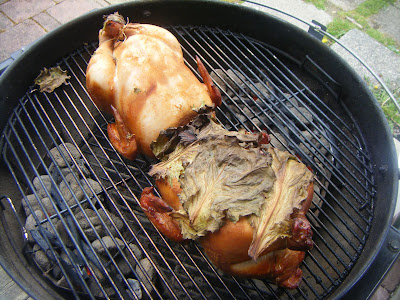 Toss the lettuce leaves and spin the individual birds (not the grate) 180-degrees; if there are hot or cold spots in the grill, that’ll help even things out. Put the lid back on and and continue roasting. For a single bird, it should take about an hour and 10 minutes total roasting time, give or take, till the chicken’s done: 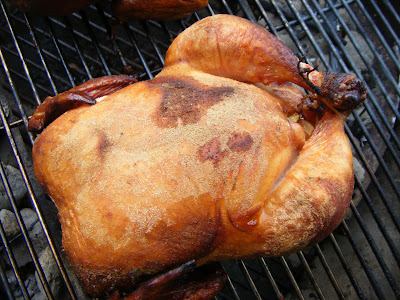 Mac never uses a meat thermometer for Captain Bay-Schmith’s chicken the way he does when he grill-roasts a turkey on Thanksgiving — he just jiggles the leg. If the joints are loose, you’re good to go, if not, keep on cooking till they wiggle freely. If you’re making two birds, the roasting time will be about an hour and a half, and when you’re done they should look like this: 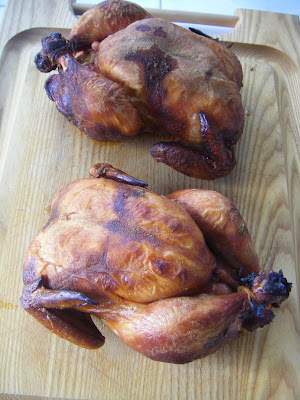 If you’re using a larger chicken (anything above, say, 3 3/4-pounds), you’ll have to increase the time and keep checking. It may take closer to two hours for bigger birds like the Rosie and Rockys available around town.

Since the grill’s already hot, once you’ve taken the birds off to rest before carving, you might throw some asparagus on the barbie. But here’s another idea: there are young onions for sale everywhere this time of year, and they make a simple, easy and surprisingly delicious side dish. These are some plump scallions I picked up at 99 Ranch Market for about 35-cents a bunch. A little olive oil, some kosher salt and here’s what you get: 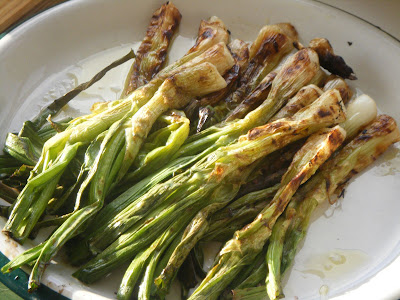 Last Sunday, for Mother’s Day, we invited Seattle Times restaurant critic Providence Cicero and her family (a.k.a. “the immediate family”) over for dinner. Then we all sat down to Mac’s chicken and raised a glass of wine — and a fork — to honor Captain Bay-Schmith, who’s long since gone on to that vintage tugboat on the heavenly seas: 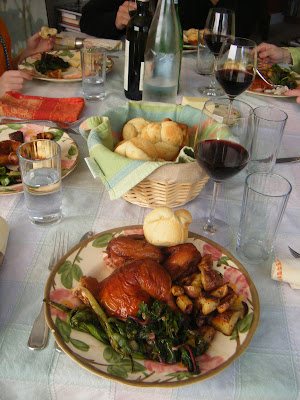 Too bad I forgot we still had a bottle of Gammel Dansk — a gift from the dearly departed Bay-Schmiths, brought back years ago from Denmark — or we’d have hoisted a snort of that, too: 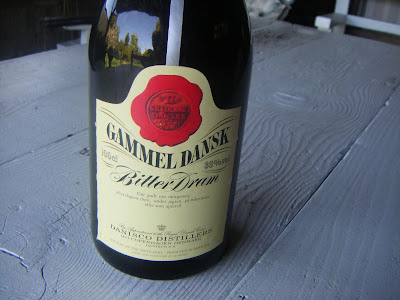