Last week, an Eater wrote wondering what was up: He’d made plans to hold a 50th birthday party at Belltown’s Brasa, but when he attempted to contact the management to talk particulars no one returned his calls or e-mails. Yesterday, a well-connected chef told me he’d received an invite to an “End of an Era” celebration at Brasa — which closed Saturday night, he said, adding that the closure was a quiet one that “may end up being called a remodel.” And then this morning, a fella named Benson Grinspan wrote from thousands of miles away: “Here in South Carolina we’re hearing Brasa closed Saturday. Say it ain’t so.”

I wish I could. And while I don’t have all the details — yet — here’s what I do know:

The last time I talked to owner/chef Tamara Murphy, in March, I asked her about the fate of Brasa. “We’re at the end of our lease. They’re going to demo the building,” she said, pointedly failing to put a time-line on when that demo was planned — or if they’d be closing the doors anytime in the near future. But given the news I heard yesterday, I hit my speed-dial to find out what, exactly, was going on at a restaurant that I’ve known, loved and covered professionally since its 1999 debut. 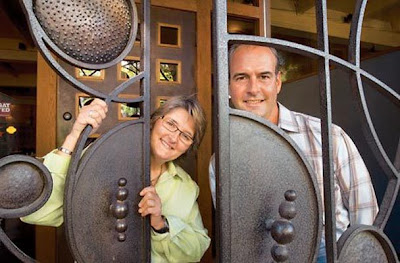 Tamara Murphy and Bryan Hill at their Belltown restaurant, Brasa, in 2007

As you may know if you’ve been reading this blog, Tamara has been up to her ears in mishegas with the big halt on her big Melrose Project restaurant, Terra Plata, plus the opening of a second Elliott Bay Cafe on Capitol Hill. Yesterday’s call got me nowhere: her cell-phone message box was full, and the e-mail I sent asking “What gives?” has so-far gone unanswered. Ditto for a message left yesterday evening on co-owner and GM Bryan Hill’s cell.

Calls to Brasa, which is open nightly, also fell on deaf ears — with nary a “You have reached Brasa, at 2107 Third Avenue in Belltown. No one is here to take your call right now . . .” to be heard.

Interestingly, an attempt to make an on-line reservation at Brasa for this evening via OpenTable got me the following message: “No tables are available within 2 hours of your 7:00 PM request” — but when I hit “find next available” the “real-time reservations”-system took me to Thursday June 17, and allowed me to make a confirmed reservation for two at 7 p.m. (I’ve got the confirmation number to prove it).

So, maybe the chef is right: Perhaps it’s just the end of an era and Brasa’s preparing for a major makeover. But I can’t help thinking it sounds like the rumors of Brasa’s imminent closure, which I’ve been hearing regularly for at least a decade, have finally become a reality.

Meanwhile, I’ll let you know what I find out when I find out. And if someone knows what’s going on — Tamara? Bryan? Anyone? Bueller? — I’m clearly not the only one interested.

UPDATE 5/19/10 1:40 p.m. See this subsequent post, with a letter from Tamara, for more on the closure. Anybody left holding an unredeemed Brasa Gift Certificate should contact her directly at tamara@brasa.com.