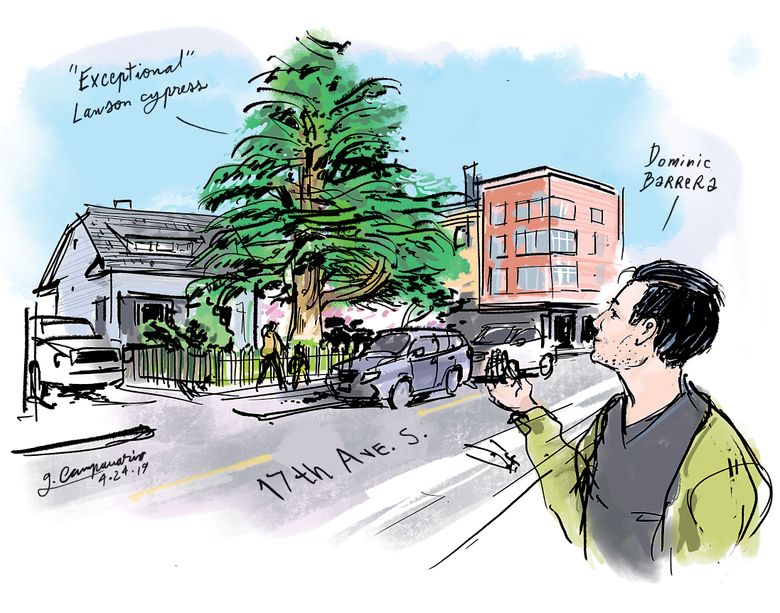 Who is up for a fun springtime treasure hunt?

And by treasure, I mean trees.

Dominic Barrera, executive director of PlantAmnesty,  wants us to help locate some 6,000 majestic trees remaining in Seattle — the ballpark figure comes from an aerial tree-canopy study conducted in 2015.

A tree is considered majestic or exceptional if its trunk is wider than 30 inches, said Barrera, a community-minded 28-year-old whose environmental advocacy was inspired by the late Cass Turnbull, who founded PlantAmnesty back in the ’80s “to stop the senseless torture and mutilation of trees and shrubs.”

The “Last 6,000” civic campaign originally caught my eye on Instagram because I have long wanted to learn to tell trees apart. The one Barrera introduced me to in Beacon Hill is a Port Orford cedar, also known as Lawson cypress.

I told Barrera the name of the campaign, which launched just last week, sounded a bit apocalyptic. Are these really the last 6,000 awesome trees we’ll ever have? But he made the point that it can take decades for newly planted trees to reach “majestic” status. He also said trees aren’t just needed for aesthetic purposes. They capture carbon emissions, maintain hillsides and offset the environmental impact of industry, especially in South Seattle neighborhoods where more industry is present. “They are an economic necessity,” he said.

Barrera is hopeful the public will help his organization find at least 1,000 majestic trees within one year. If you want to help with the hunt, he says the process is easy. “Take a picture, write up the address and enter the information at www.thelast6000.org.”