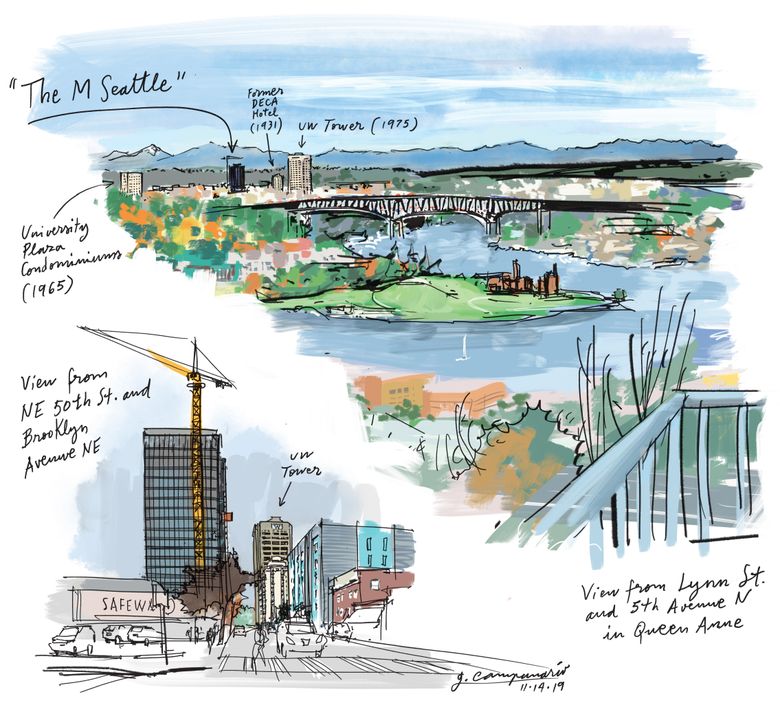 The University District skyline, frozen in time for decades, is beginning to change. Have you seen that new glass building that recently popped up on Northeast 47th Street and Brooklyn Avenue Northeast?

The 24-story residential tower, marketed as The M Seattle, is the first high-rise to be built in the neighborhood since the city approved new height limits for buildings in 2017.

It’s also the first structure to alter the skyline in decades. The UW Tower, originally built as the headquarters of Safeco Insurance, was completed in 1975, the University Plaza Condominiums date back to the mid-1970s and the beloved art deco tower on Northeast 45th Street, which houses a hotel and a popular rooftop bar, dates from 1931.

From near or far, as my sketches show, this new, sleek skyscraper looks like nothing around it. Dark and boxy, it contrasts with the light-colored tones of the older skyscrapers — not to mention with the eclectic (but charming!) hodgepodge of low-rise commercial buildings nearby.

More high-rise towers are in the pipeline in the heart of the U District, so this one is just an appetizer of how the neighborhood is likely to look in the next few years.