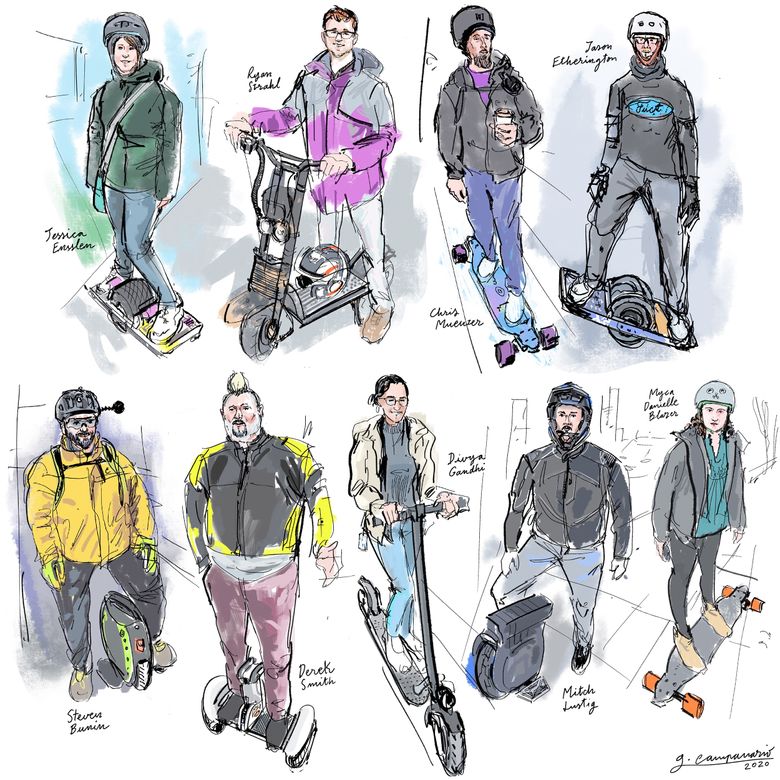 In the precoronavirus times of the not too distant past, when many of us were commuting in crowded buses, some people had already embraced a nimble mode of transportation that seems perfectly made for both carbon footprint reduction and social distancing.

Known collectively as “e-riders,” this new generation of commuters moves around on nifty electric devices that can go for miles on one battery charge.

The electric scooters and skateboards have a familiar look, but they are much larger and more sophisticated than the toys I remember from my childhood — the electric skateboards even come with a remote control that lets you accelerate and brake easily. The mini-Segway resembles its bulky predecessor, but you can steer it with your legs as if you were skiing. The self-balancing unicycles are ideal for traversing Seattle’s hilly terrain, and the Onewheel boards have a cult following among traditional surfers and skateboarders.

As we approach the 50th anniversary of Earth Day and e-riders become more ubiquitous in our region, a question comes to mind. Is this a fad, the emergence of a new breed of sports or the prelude of a new era in the history of transportation?

The e-riders I met before the coronavirus pandemic hit all said that when more people realize how practical (and fun!) their gizmos are, everyone will want one.

Most people are staying off the streets now, in accordance with Gov. Jay Inslee’s “Stay Home, Stay Healthy” order, to curb the spread of the coronavirus. But here’s a handy guide to help you get acquainted with some of these different types of e-riders. Perhaps this will give you ideas for more e-friendly means of transportation to experiment with when we return to our commutes.

Logistics manager for the U.S. Navy

Jessica Ensleen uses her Onewheel to move around the big military base where she works. The gizmo, a hybrid between a self-balancing unicycle and a skateboard, appeals to everyone who loves to skateboard or snowboard, she said. “I really love it. I’m one of those people who always has to be on it. My 6-year-old son also has the same Onewheel, and he and I go on rides. He is almost as hooked as a I am.”

Self-described adrenaline junkie Ryan Strahl, a.k.a. GingerOnWheels, says the electric scooter is good for those who like the sense of safety that comes with holding onto a handlebar. He likes to take his high-end, dual-motor, “Sherman tank of scooters” off-road at 35 miles per hour, but also uses it to go to the store (he worked from home even before we were all asked to do so), cruise through the Microsoft campus or go visit his parents in Kirkland.

Device: Boosted Board V2 Dual Plus

In precoronavirus times, Chris Muenzer would ride his Boosted Board electric skateboard on the Sammamish River Trail to get to work 4 miles away in downtown Redmond. He also enjoys cruising through Marymoor Park on lunch breaks, sometimes with songs by Lizzo or Adele blasting from his Bluetooth speaker. The board meets a transportation need, he said, but it’s also a lifestyle, much like surfing was when he lived in Florida.

Etherington felt he had left behind his years of skateboarding and surfing when he moved to Seattle from Santa Barbara, California, more than 20 years ago, especially after a severe knee injury that required extensive surgery. But now the “floaty feeling” is all coming back thanks to the Onewheel, which typically took him from Beacon Hill to his job at Boeing Field daily unless the pavements were really wet with rain.

A native New Yorker who enjoys running, cycling and roller-skating, Bunin owns a Onewheel and a bike, but the electric unicycle is his first choice for the commute between his home in the Central District and work on First Hill. When it gets dark early in the evening, he wears reflective gear, a rearview mirror and lights on the front and back of his helmet to be as visible as possible to pedestrians and cars.

A longtime motorcyclist and fan of all things motorized, Derek Smith has been hopping on his mini-Segway to go from his apartment in Belltown to his job downtown for about a year. He says it only took him a half-hour of practice at home before he felt comfortable enough to take it on the sidewalk. “The nicest thing is that you don’t have to dismount when you need to stop,” he said. “I get to be really lazy.”

Gandhi’s first e-riding experience was using a Lime scooter on the Microsoft campus. When the scooter/bike-share company discontinued the program, she decided to purchase her own, which was helpful to move around on as she recovered from a broken ankle. She did a lot research online and opted for a model with tires that don’t require inflating.

Lustig lives on Capitol Hill and works in Pioneer Square. With his electric unicycle he gets back and forth quickly. A pretty handy guy who also teaches juggling at a circus school, he has customized his unicycle with a special footrest and even a cushion that allows him to ride while sitting down. Ever the showman, Lustig said that beforeo “Stay Home, Stay Healthy,” he loved performing freestyle tricks in Cal Anderson Park.

Device: Boosted Board V2 Dual Plus

Blazer started e-riding when she inherited her first board from her brother a few years ago. Now (or at least under normal circumstances), she rides her own board from her home in Fremont to work in South Lake Union on days when it isn’t raining. She met her boyfriend while riding with a group, and before everyone was told to stay home, one of their favorite things to do together was to take their skateboards (and their dog) out on the Burke-Gilman Trail to decompress after a week of work.