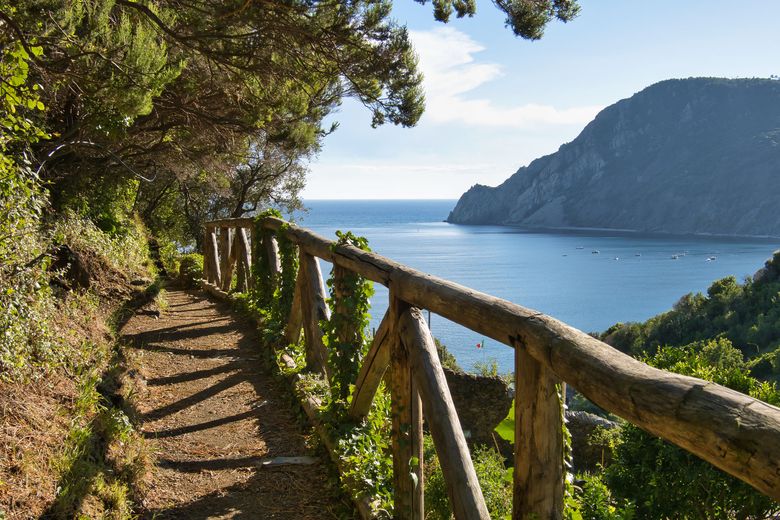 These hidden trails offer a quieter side of the Italian Riviera

A network of trails in Liguria’s sun-soaked Italian Riviera access a peaceful landscape that feels a world apart from the region’s tourist-crowded beaches and ports.

On a sunny Saturday at the tail end of summer, I’m hiking along one of several coastal paths in Parco di Portofino, a protected, 2,600-acre green promontory located on the otherwise bustling and tourist-crammed Italian Riviera. It’s so quiet that I can hear the whistles of Sardinian warblers and golden orioles pierce through the forest, and so undisturbed that I spy porcini mushrooms poking through the topsoil under earthy chestnut trees. The view ahead to the open sea is a horizon line separating two shades of blue, broken up only by a kite-like tail of white triangle sails, while Portofino’s rocky azure cove below looks like some sort of doctored screensaver.

Portofino is one of Italy’s most storied destinations, and the busy road to it is lined with purring Cinquecentos and Vespas, its lidos and beaches are thronged with sunbathers, and its restaurants teem with languid, sun-bronzed diners washing down mouthfuls of fritto misto with gulps of cold Vermentino. This is the Italy travelers dream of. So why then are these gorgeous trails empty?

The short answer is that in warmer summer months, most Italians prefer the beach to hiking trails. So even though trails here offer shade and sea breezes, they tend to empty out from June to September. But after relocating to Liguria from Switzerland this past winter, I discovered that these high, stone walled trails, known locally as crêuza, offer a quiet slice of Italian nature and biodiversity. Another fact ensuring a bit of solitude: Only a few of them show up on Google Maps (Maps.Me is better), not all of them have names, and they’re often quite steep.

Crêuza are unique to Liguria. Loosely translated, the word means “mule track” in ancient Genoese, a dialect still spoken here. But the word also has Celtic roots harkening back to pre-Roman times when this region was traversed on foot by Celto-Ligurian and Etruscan tribes like the Casmonati, Tigulli, and Genuati. Many of the trails were developed so that mules could transport agricultural goods—first grapes and olives, and later lemons—grown on Liguria’s notoriously steep Apennine hillsides that plunge down to the Mediterranean.

In 2018, Liguria strung together the Sentiero Liguria, a 420-mile long hiking trail that runs the entire arc of the region from the French border to Tuscany. The main trail runs mostly along dirt paths, occasionally meeting with cobbled crêuza, but it’s the crêuza paths that connect almost every village in Liguria, corkscrewing through campanile-topped hill towns, olive groves, scrubby macchia brush and holm oak and hornbeam forests. Because Liguria is so steep, many crêuza are interconnected by crooked stone staircases, adding a vertical challenge to any hike. There are even a few elevators connecting some paths, particularly in Genoa’s medieval and labyrinthine old town. Whenever I explore the crêuza, I forgo a rental car and rely instead on the coast’s well-connected electric trains, buses and ferries to string together a few trails.

Most crêuza are lined with high stone walls built to keep out ninth-century Saracen invaders. But today the walls that once kept invaders out attract an array of flora and fauna including rare wildflowers like snakeroot and wild daffodils, nesting hoopoes, spectacled salamanders and even Italian wolves, which are repopulating the area.

While hiking the Salita Sant’ Apollinaire crêuza near my apartment in Polanesi one cold February morning, I heard the haunting howls of wolves. I mentioned it to a few Italian friends, who rolled their eyes at the Americano for imagining such nonsense. But a month later, I was vindicated during a birdwatching crêuza excursion with Suoni in Cammino(Sounds on the Trail). The cultural and nature entity built in partnership with Il Bosco in Ascolto (The Cultural Association of Forest Listening) organizes music concerts, art performances and nature sound trekking excursions on scenic paths. During my hike, I asked biologist and guide Mirjam Knoop if the howls I heard were wolves, and she nodded. “Italian wolves have been detected in Parco di Portofino, so it’s very likely you did. Wolves are the only natural predator of young wild boar, which are causing havoc across Italy, so their presence assures an ecosystem balance.”

While most visitors to Liguria still come for the sea, interest in hiking its lesser trekked hinterland and coastal hills has increased since the pandemic, and even a few luxury hotels got involved. One such property is the new Splendido Mare, a Belmond Hotel, a sumptuous 14-room retreat clad in wood, rope and brass, owned by LVMH and an annex to the property’s 70 room mainstay, Splendido, up the hill. Guests can battle the buses of cruise ship tourists gawking at yachts and Dolce & Gabbana’s villas from the town’s famed piazzetta, or they can opt to escape to crêuza for organized hikes that stop at unknown places like Portofino Eco Farm and Winery. The owners, the Viacava family, recently introduced a one-table trattoria serving only seasonal Ligurian ingredients, and it’s intentionally left off Google Maps.

Nearby, the serene six-room Villa Rosmarino in Camogli is located steps from the Castagneto crêuza and surrounded by roses and camellias. The English-speaking Italian owners, Mario and Fulvio, are knowledgeable about the trails and can organize hiking guides, while their sunny pool and terrazzo-floored library, stuffed with books about Italian art and cuisine, offer a respite for weary hikers. Nearby, and just off the trail to San Rocco, is Ristorante la Cucina di Nonna Nina, a pink and green villa tucked behind Chiesa di San Rocco. Here, Ligurian classics—rabbit with olives and pine nuts, a stacked seafood dish called capon magro, and focaccette al formaggio, pastry pillows oozing with warm, tangy stracchino cheese—are served on checkered tablecloths.

As I walk along the quiet, narrow crêuza of Via Belvedere during a spectacular tangerine-colored sunset one evening, I stop to reflect on the many writers of yesterday who found refuge on them too. Dante walked these paths after being exiled from Florence. So too did Byron, Twain, Dickens and Goethe. In fact, writers have waxed poetic over them for centuries. But few have captured their nuanced beauty better than local Nobel laureate Eugenio Montale or Genovese singer-songwriter Fabrizio De André, whose poetic verses, sometimes in Genoese dialect, tell stories of Ligurians living among these paths.

Montale’s iconic poem “I Limoni” springs to mind, gently reminding me that these crêuza are true sanctuaries, a luxury in such uncertain times: “Here, by some miracle, the war of conflicted passions is hushed, here even the poorest of us share riches in the smell of lemon trees.”

Adam H. Graham is a freelance food and travel writer based in Switzerland and Italy. His writing has appeared in the New York Times, Wall Street Journal, Afar, Travel + Leisure, Condé Nast Traveler and several other publications.