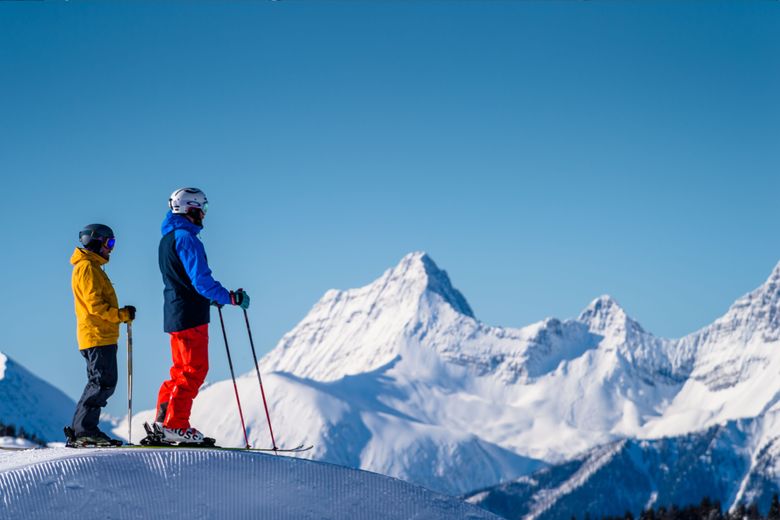 Mountain Highs The postcard-perfect winter landscapes of Banff National Park, in Canada’s western province of Alberta are a playground for lovers of the snow.

This is part of the Winter Travel 2021 special section.

A glimmer of green lured me into the frosty evening on my first winter visit to Banff National Park. I had traveled to this, the oldest of Canada’s national parks, in the heart of Alberta’s Rocky Mountains, for its famously featherlight, powdery snow. I’d spent most of my day skiing on the high-alpine plateau of Banff Sunshine, surrounded by majestic summit views and rolling terrain—some of the most beautiful I’ve seen in North America. But it was that moment under the star-studded night sky on the western shore of glacial Lake Minnewanka, where I huddled in multiple layers of fleece under bright ribbons of the aurora borealis, that took my breath away.

Memories like these continue to draw me back to Banff, a winter wonderland in the Canadian Rockies that is less visited than Whistler Blackcomb in neighboring British Columbia, which gives it this wild, way-out-there feeling. Even in the height of winter, Banff never feels overcrowded, despite its easy access just 90 minutes by car from Calgary Airport. And when I’m not skiing, snowshoeing, dipping into hot springs, or chasing the northern lights, the charming town of Banff is a favorite for its variety of dining and bar options, not to mention the castle-like Fairmont Banff Springs and the lakeside Fairmont Chateau Lake Louise that feel more like private estates than hotels.

Skiers and snowboarders have a wealth of choices between three easily accessible ski resorts: Banff Sunshine, Lake Louise Ski Resort, and Mount Norquay. My favorite is Banff Sunshine, which sits high on the Continental Divide and has three sprawling mountains with spectacular sightlines; its seven-month season is the longest non-glacial ski season in Canada. The 4,200-acre Lake Louise Ski Resort, one of the largest ski resorts in North America, is spread across four mountain faces, and is known for a variety of landscapes ranging from chutes and gentle slopes to wide-open bowls. Family-friendly Mount Norquay is closest to the town of Banff, and it’s where I go for nocturnal runs—this mountain has the only night skiing in the region. All three resorts are connected on the SkiBig3 lift ticket, which also includes free ski shuttles and flexible grace days.

Since Canada’s borders recently reopened, I’m plotting my return to experience some of the Banff area’s newer attractions. Opened during the 2020-21 season, the 480 acres of Lake Louise’s West Bowl remain largely unexplored by visitors outside of Canada. It’s capped by the summit of Whitehorn Mountain, and features some of the best advanced to expert-level terrain in Banff National Park. Here, skiers and riders have panoramic views of the Canadian Rockies, the Bow Valley, Lake Louise, and Victoria Glacier. I can’t wait to hit the new Summit Quad Chair, a four-minute ride up the ridge of Whitehorn Mountain, which allows access to the new West Bowl terrain and the resort’s back bowls. Later this season, the new Juniper Express Quad will become the third base area lift, taking guests to more beginner and intermediate runs.

My next favorite thing to skiing in Banff is venturing out on snowshoes. Guided tours at Lake Louise Ski Resort range from beginner jaunts to a night trek under the starry sky, but as a seasoned snowshoer, I prefer to go it alone. Parks Canada offers a list of trails, including Ink Pots via Moose Meadows. It’s magical having these trails all to myself as I take in the silence amid the dense forests and wide open meadows, with blue-green mineral springs that peek out of the snow. I also like to polish my cross-country skiing skills in the Bow Valley Parkway, with its sparkling elk-filled paths and trees bowing under the weight of fresh snow. For something more vertiginous, there’s Johnston Canyon, where guided ice walks take you along a series of trails and steel catwalks built into the walls of the deep canyon. Glittering frozen waterfalls hang from the cliffs in cascading curtains of ice, and if you’re lucky, you may spy ice climbers scaling the frozen columns.

After a day of adventures, the area’s natural hot springs entice me into their soothing waters. The origin of this national park is connected to the discovery of Cave and Basin Hot Springs, both of which are now a national historic site where swimming is prohibited. But just 10 minutes away is Banff Upper Hot Springs, which with its panoramic views of the Rundle range is on the après-ski list of many visitors. I love visiting the steamy blue pool during the less busy mornings, when I can find the quiet tranquility that comes so easily to me in this immaculate white landscape.

IF YOU GO
Alaska Airlines flies nonstop between Seattle and Calgary. Stay at Fairmont Banff Springs (from $320) or Fairmont Chateau Lake Louise (from $400). For sightings of the Aurora Borealis, head to Lake Minnewanka or Castle Junction—both accessible by car; sign up for an email alert at aurorawatch.ca.