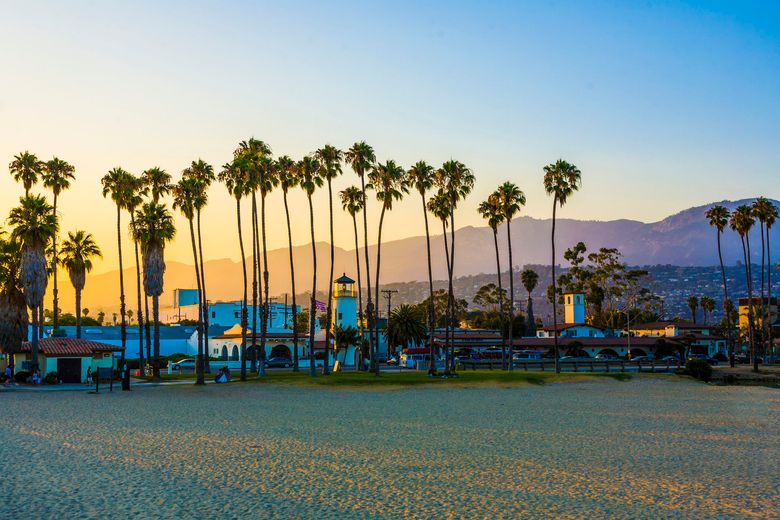 An insider’s eating and drinking weekend around Santa Barbara

On a culinary drive through Santa Barbara, sustainable food and wine businesses are both abundant and delicious. A Los Angeles-based oenophile leads the way.

Santa Barbara has been called the American Riviera for its dazzling coastline, red clay roof and adobe architecture, and laid-back coastal vibes. The thing that keeps me coming back, though, is the area’s incredible food and wine, much of which reflects the region’s deep commitment to sustainability. On weekends, I love traveling the less than two-hour drive up the Pacific Coast Highway from my home in Los Angeles to Santa Barbara, stopping to sample creations from the restaurants, winemakers and breweries whose admirable practices honor the land. Read on for my perfect driving itinerary.

I like to start my day at Satellite Santa Barbara, a vegetarian restaurant where nearly all ingredients are sourced twice weekly from the city’s farmers market. The restaurant also pours organic and naturally fermented wines from producers practicing biodynamics, regenerative agriculture, polyculture, and no-till farming. Try the Yoga Pants Salad, which changes regularly based on seasonal ingredients, like blueberries and cherry tomatoes in the summer. Wash it down with a flinty Marsanne wine from Âmevive, made by noted vigneron Alice Anderson, whose vineyard is located on a regenerative farm nearby. My other favorite dining spots, The Lark, Loquita, and La Paloma Café, feature menus certified as “Ocean-Friendly” by the Surfrider Foundation, which works with businesses to protect the earth’s oceans and beaches through such conservation efforts as eliminating single-use plastic. For example, dishes like oak grilled yellowtail and ceviche at La Paloma are sourced from local fishermen and the Santa Barbara Fish Market. When I’m craving an outdoor oceanfront meal, the white tablecloth Caruso’s at Rosewood Miramar Beach is a delicious splurge; try chef Massimo Falsini’s Santa Barbara flaky halibut in a potato crust.

For a midday snack, the daily creations at Helena Avenue Bakery all use locally milled organic flours and naturally fermented yeast. My go-to menu item is avocado toast made with organic avocados and sunflower sprouts from the nearby seaside city of Carpinteria. Under the same roof as the bakery, you’ll find Santa Barbara Wine Collective, which offers some of my favorite regional organic and biodynamic wines, including the Provence style, strawberry flavored 2020 Rosé from Grace Wine Company and the crisp and floral Gewürztraminer from Fiddlehead Cellars. When I’m ready for a break from vino, I head to Night Lizard, a craft brewery that uses mostly regional ingredients and names its brews after endangered species. The brewery also holds public film screenings and science talks centered on environmental issues along California’s Central Coast.

There’s nothing better than sleeping by the ocean, which is on view from all 70 Spanish Mediterranean-inspired guestrooms at the Santa Barbara Inn (from $389). Here, Convivo restaurant offers locally sourced seafood like ahi tuna crudo. For a really special occasion, there are few more sumptuous places to stay than the bungalow-style cottages at San Ysidro Ranch (from $2,495, including meals), set on a 500-acre retreat dotted with oak trees in the foothills of wine country. San Ysidro has teamed up with Boomerang, an all-in-one bottling company that eliminates the use of plastic water bottles. The property’s Stonehouse Restaurant sources its seafood from Santa Barbara’s sustainability-driven Kanaloa Seafood; pair the flaky and herbaceous Parmesan-crusted halibut with a selection from the Ranch’s 12,000-bottle wine cellar.

Kristin Braswell is travel journalist and the founder of CrushGlobal Travel. She has written pieces for Vogue, CNN, USA Today, Essence, NPR, Architectural Digest, Ebony, and the Los Angeles Times, among others.