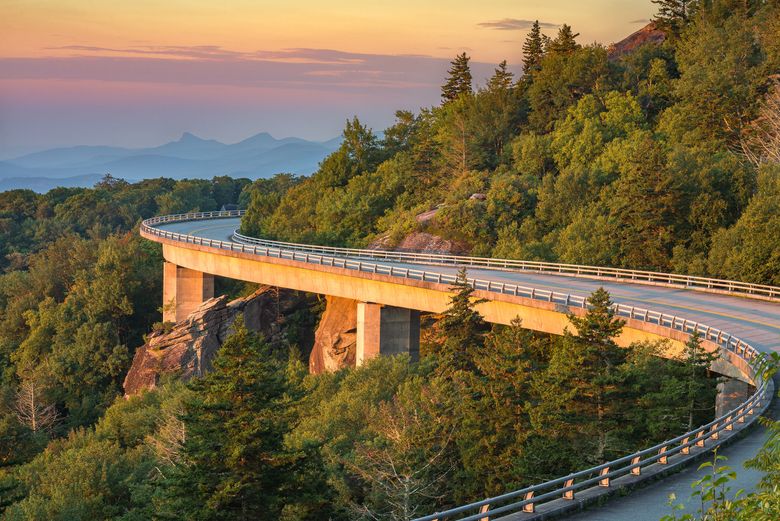 An eco-conscious family road trip through the Great Smoky Mountains

On a drive through the forested preserves and mountain towns of the Appalachians, one family discovers lesser-known trails, regional artisans, and sustainably-sourced restaurants.

Our son and daughter, Devan and Diya, heard the waterfall before they saw it. Spilling over rocks and flowing into a river, we discovered the rushing water just off the Lynn Camp Middle Prong Trail in Tennessee’s Great Smoky Mountains. Soon enough, our kids had left the trail and were dipping their toes in the waterfall’s pool and looking for salamanders.

Our guide, David Harlow, who works with hiking outfitter Smoky Mountain Guides, chose this lesser known path through the Lynn Camp Prong Cascades over the larger and more popular Laurel Falls nearby to give my family of four the experience of being out in the wilderness alone. Indeed, when we visited Laurel Falls the next morning, my family had to join the line of hikers waiting to snap pictures in front of the 80-foot waterfall. All four of us agreed that it was impressive, but my kids didn’t get to have the intimate moment with nature that the quieter Lynn Camp Prong Cascades had offered them.

We had flown into Asheville, North Carolina, from our home in Los Angeles for a weeklong visit to the Great Smoky Mountains, which sit on the border of eastern Tennessee and western North Carolina. It’s the most visited of all 63 U.S. National Parks, and like so many others, it saw record visitation during the pandemic. With 14 million visitors in 2021—up 57 percent from 2011—crowds and littering are growing concerns. Unlike most other National Parks across the country, Great Smoky Mountains currently charges no entry fee, but the NPS is considering implementing a small sum for parking, and increasing the prices of some campgrounds, picnic pavilions, and backcountry permits as a way to raise funds for maintaining the park. If approved, the fees would go into effect in 2023.

My husband, Mitul, and I wanted our family to experience the beauty of the area’s landscapes and mountain towns together for the first time, but in a more sustainable way. Thankfully, it didn’t take long for us to find companies like Smoky Mountain Guides that embrace these values and educate guests about how to be better visitors. While in the park, we tried to minimize our impact by visiting less frequented areas, staying on trails to prevent erosion, and being mindful of taking our trash out of the park with us. Even biodegradable waste like apple cores and orange peels can be a problem—they take weeks to decompose and can attract animals, Harlow told us.

I’m not above a chocolate granola bar bribe to encourage my brood to keep going, and it’s exactly what I offered an hour into our hike through Lynn Camp Middle Prong Trail. But I was delighted to see our kids had paid attention to Harlow, and stowed away all food wrappers and sandwich bags in our backpack after nibbling on snacks and trail mix.

As we continued to walk, we noticed a dampness in the air, and moss began to appear on the bark of hemlock, maple, and birch trees surrounding us. Harlow told us the Smokies are a temperate rainforest with some 19,000 species of animals, plants, and fungi. He mentioned the importance of buying kiln-dried firewood for campsites, since pests can spread from untreated wood and harm fragile ecosystems. Two decades ago, the park’s hemlock population was decimated from the introduction of an invasive beetle from Asia—and it’s almost certain humans played a role.

After our morning waterfall hike, we drove to Gatlinburg, Tennessee, in order to experience the lively downtown. One of the primary gateways to the Smokies, Gatlinburg has several admirable green practices in place. Hybrid electric trollies circle downtown’s attractions, including Anakeesta, a nature-inspired theme park, and dozens of shops, restaurants, and distilleries; a nearby state of the art waste facility recycles or composts 70 percent of all the county’s trash.

I had heard about the strong arts and crafts tradition of Gatlinburg, which is home to a community of painters, glass blowers, weavers, woodturners, and ceramicists that we sought out while we were there. Housed in a historic chalet-style building, Cliff Dwellers Gallery is a cooperative of several local artists showcasing watercolor paintings, ceramics, baskets, jewelry, and more. Nearby, at Joe Compton Woodworking, a fifth generation wood turner from the area, we browsed beautiful wooden kitchen utensils and Christmas ornaments. One afternoon, we found ourselves at spinning pottery wheels at Fowler’s Clay Works, where we made our own bowls. My husband and I were glad to see our kids smiling and laughing as they tried to steady their balls of whirling, wet clay.

A few days later, we took the two-hour drive from Gatlinburg to Asheville, North Carolina. We were drawn to the mountain town for its outdoor pursuits, including access to the scenic Blue Ridge Parkway, and fantastic arts, food, and beer.

Two miles south of downtown Asheville and along the French Broad River, the River Arts District is home to some 200 working artists who came here for the affordable warehouse spaces, not to mention the coffee shops, bakeries, and breweries. Between browsing the galleries, to Devan and Diya’s delight, we stumbled upon the pint-size Mother bakery while strolling the area, and ate our weight in chocolate babka and focaccia.

As we tasted our way through the top restaurants in the city, I noted how well the dynamic dining scene showcases the bounty of the region. Our meal at Posana featured oyster mushrooms from North Carolina’s Black Trumpet Farm and red rice from nearby Lee’s One Fortune Farm. Newcomer Harvest Pizzeria sourced kale from 30 miles away in Hendersonville and grass-fed meats from the region’s Hickory Nut Gap. At Chai Pani, which also sources locally where possible, we dug into plates of Indian street food such as bhel puri, a puffed rice, vegetable, and tamarind snack, and pav bhaji, a spiced vegetable dish, which as a Mumbai-born devotee of street food I found to be authentic and delicious.

Just beyond the city limits, the expansive Sierra Nevada facility is the first LEED Platinum-certified brewery in the U.S. From solar panels and storing rainwater for irrigation to converting vegetable oil to biodiesel, I was impressed by the brewery’s commitment to sustainability. And the taproom menu, which includes vegan chili and tempeh banh mi, also got the stamp of approval from the two younger food critics among us.

Asheville’s other claim to fame, the Vanderbilt family’s 130-year-old Biltmore Estate, is the largest private residence in the country and feels no less grand than Versailles. To its credit, the Biltmore has several green practices in place, too. The estate’s 7,000 solar panels offset 20 percent of its energy needs, and there’s a comprehensive cork recycling program at its on-site winery. Dozens of milkweed plants in the landscaping support the monarch butterfly population that crosses the Appalachian Mountains during the autumn months—a sight all four of us long to return and see.

Delta Air Lines, United Airlines, and American Airlines all operate regular flights into Asheville Regional Airport with one stopover. The writer stayed at a vacation home through Stony Brook Cabins in Gatlinburg, and in Asheville, she stayed at the Kimpton Hotel Arras and the Inn on Biltmore Estate.

Los Angeles-based writer Tanvi Chheda loves sharing her passion for travel with her family. Her work has appeared in such publications as The New York Times, Travel + Leisure, Robb Report, AFAR, and Virtuoso Life.