This summer, as the pandemic still rages on, high-fives haven’t quite returned. After a virtual senior year and a last-minute in-person graduation, she’s continued her school-year internship at the venture studio Atomic completely remotely, rather than from the office as she had hoped.

But recently, Davis’s idea of her dream internship shifted. She realized that she doesn’t mind working from home — and in fact, after months of wishing for normalcy, she prefers it.

“Remote work gives you the option to explore the world more,” said Davis, 22, who’s been working from Evanston, Illinois, near her alma mater, Northwestern University. “When I switched my mindset, I went on road trips and explored the place around me. I had the opportunity to do that because I wasn’t forced to stay at headquarters.”

A good summer internship can lead to the job of your 20-something dreams, assuming you have a few well-timed run-ins with your boss, make enough appropriate jokes at your team meeting, work harder than you ever thought possible and are blessed with a little (OK, a lot) of luck. When this rite of passage is remote, not only is a full-time offer potentially harder to secure, but you also miss out on free snacks, slightly awkward co-worker friendships and any semblance of what it’s like to work in an office.

And many of this year’s interns are A-OK with that.

While this story is, of course, an unscientific study (written by a remote intern!), everyone interviewed happened to share this general sentiment. For Jane Gormley, a design education summer associate at Design for America, the remote nature of the job was what made it so appealing. Gormley has Tourette’s syndrome, which causes her to utter unwanted sounds or repetitive movements. It’s easier to mute herself on video than to physically exit a meeting.

Plus, said Gormley, “I really liked the idea that I just graduated and I can be mobile. I can be home, I can travel a lot to see friends. It’s just nice to have the flexibility to do that. I wasn’t wanting to move somewhere just for the summer, especially now that I’ve graduated.”

After spending much of the past year-and-a-half in St. Louis at off-campus Washington University housing, the 22-year-old has relished spending most of her summer at home with her parents in the Seattle suburbs. 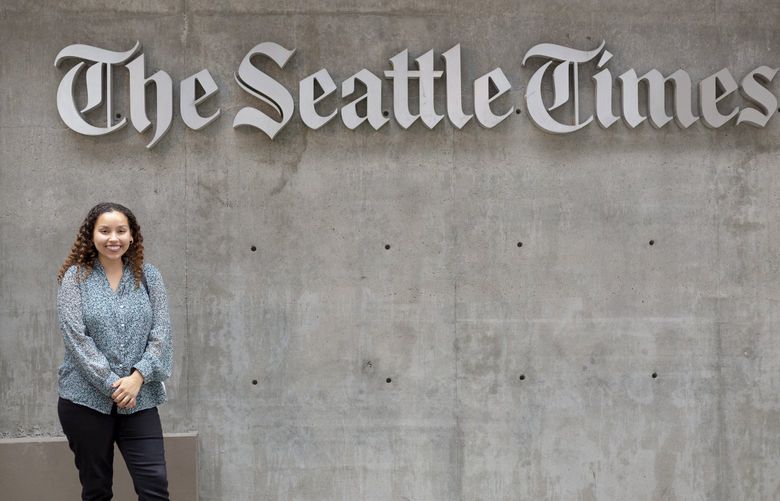 It was an unconventional, and mostly remote, summer for 9 Seattle Times interns

Seeing distant family and friends has been hard for college students during the pandemic; each time they go home, there’s a risk of infection. The beauty of remote work is the ability to hug loved one after loved one and log on from wherever you are.

“If I had to move to a new city to do my internship, it would suck to leave my girlfriend and my friends,” said Will Durban, an IT intern at Peloton and an incoming sophomore at the University of Southern California. “While I know I can form new relationships somewhere else, I think my personal life definitely would not be great. I think it’s definitely a balance. When you’re remote, you can stay with your friends and also work for a cool company versus having to sacrifice one or the other.”

Durban did have a six-month, in-person stint for Peloton. From September to May, he worked in the Long Island, New York, warehouse repairing stationary bikes and delivering them to customers, while living at home and attending school online. It wasn’t anything like the product research he’s doing now in his internship — but after seeing the company from both sides, Durban prefers a hybrid work environment. He chooses to go into the New York City office once a week, but reclaims so much time on non-commute days that he’s been able to take two summer classes.

“This made me go from an ‘All I want is full in-person’ mindset to ‘definitely hybrid.’ Especially for a corporate job,” said Durban, who has lived at home in a New York City suburb for the entire pandemic.

Durban has tried to meet as many people as he can from Peloton’s electrical engineering team, so far having one-on-one Zoom meetings with more than a dozen employees. He’s even met the California-based director — which might have been harder to schedule if they had been working in person.

Gormley met up with a member of her seven-person team who lives nearby, and Davis attended a team retreat in San Francisco, allowing them both those office-life fist bumps they’d been missing.

“We just hung out together as friends, rather than co-workers,” said Davis. “I think that it’s really hard to get people’s personality solely on Zoom, so it was just really great to see them in person.”

Isabella Hochschild, an engineering intern at Nurx, woke up to a surprise box of personalized snacks from the health-care company for National Interns Day this month. And while in previous internships she got used to her bosses taking her out for lunch or chatting in the hallways, Hochschild feels like this summer she “hasn’t missed out on any connections.”

“I’ve stayed late on calls chatting to colleagues about something loosely connected to the project that we’re working on,” said the incoming Dartmouth College freshman, who’s working from home in San Francisco. “I still feel like I get some of the same perks and the sense of in-person work.”

Interns often learn from direct observation — but they also learn how to fend for themselves, something remote work allows. It’s a welcome change from the endless Zoom lectures of the school year.

“The sort of learning that I have had to do as a part of this job is a lot more self-directed than that of the online school that I’ve had this past year,” said Bella Koscal, an intern at Lockheed Martin. “I wouldn’t say it was a ‘sink or swim’ mentality. They were there to help me, but they only gave me as much help as I needed, which I definitely preferred.”

Koscal didn’t relocate to the company’s base in Bethesda, Maryland, opting to stay in her off-campus housing at the University of Kansas until the school year resumed. The incoming senior has been able to travel, spend less on rent, hang out with her roommates and dodge finding a replacement tenant for her landlord.

“I would have loved to be able to explore the Bethesda and Washington, D.C., area, especially because I’ve never been there before,” said Koscal. “But I don’t feel a great loss also from not having been able to live there for the summer. It’s just the situation that we’re in.”