Between lost revenue, layoffs and furloughs, and changing statewide health directives that ended visitation overnight, 2020 was a year of struggle and adaptation for museums and arts organizations in Washington state and across the country.

“Well, let’s state the obvious, which is that the crisis really has had a serious financial impact on SAM,” said Amada Cruz, director and CEO of the Seattle Art Museum. It’s a common refrain throughout the industry.

Leslie Anne Anderson, director of collections, exhibitions, and programs at the National Nordic Museum, described the pandemic’s impact on the museum’s business model as “massive,” one that necessitated philanthropy efforts and COVID-19 relief funding.

And according to a frequently cited national survey of COVID-19 impacts on American museums, conducted by the American Alliance of Museums and released in June, 33% of surveyed institutions said that either they would face “a significant risk” of permanent closure without financial assistance, or they didn’t know if they would.

Much of the reporting on this finding focuses on the percentage of museums facing permanent closure, but for institutions attempting to adapt to a set of constantly changing variables caused by the pandemic, the uncertainty has been plenty damaging on its own, even as museums statewide are now allowed to be open at 50% capacity or 400 people, whichever is less. 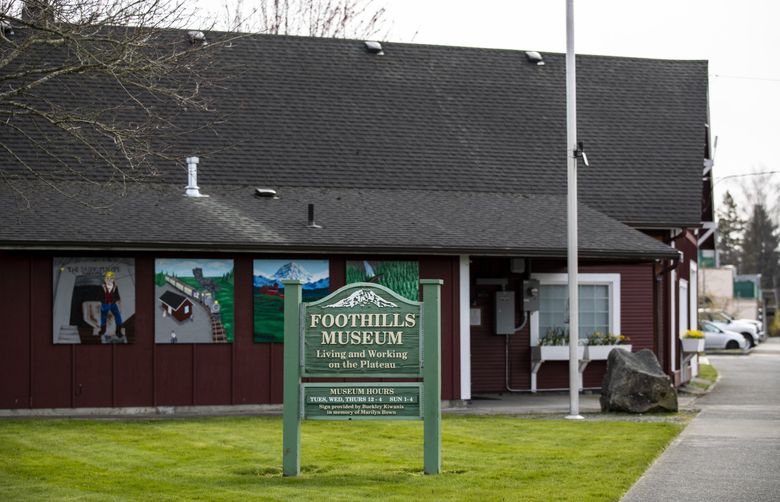 For 40 years, this family-run museum in Pierce County has proudly showcased its community’s history

For Cruz, dealing with the unknown presented one of the biggest challenges of running an institution like SAM during a massive public health crisis.

“If we had had a certain end date, then we could have saved a lot of that effort, and made a yearlong plan, and said, ‘OK, this is what’s going to happen over the next year, it’s going to last two years, this is how we’re going to get through it,’ ” she said. “Instead, for every quarter, we had … three different scenarios.”

Financial impacts were significant. Ingrid Langston, head of communications and content strategy at the Frye Art Museum, reported that her museum’s operating income dropped by $554,000 last year, representing a more than 50% reduction in the museum’s budgeted revenue of $1 million for 2020. At the National Nordic Museum, said Anderson, revenue dropped by nearly 25% on a $4 million budget in 2020.

This meant museums had to make cuts wherever possible. “We had to make some very deep cuts to control expenses and reduce our budget by 25%,” said Anderson.

Making cuts was uniquely challenging at SAM, said Cruz, because the institution encompasses three facilities — the downtown museum, the Seattle Asian Art Museum and the Olympic Sculpture Park — which makes for high overhead costs, even when closed. “It really felt like we were in complete crisis mode for six months, trying to figure our way out of this mess,” she said. Cuts were made across every department, and the museum’s special exhibition budget was cut by two-thirds.

In April, SAM took out a $2.8 million Paycheck Protection Program loan “that really helped us keep staff for months,” and leaned on private gifts, the biggest of which was a $2 million closure relief fund gift from the Friday Foundation. Senior staff took initial salary cuts, and in July, furloughs and reductions were implemented across the board — 78% of staff were affected, said Cruz.

“We did that on purpose, thinking about equity, and really making sure that all of us were really sharing in the pain,” she said. In December, it was clear that layoffs would be necessary for some employees. “It was fewer than 20, most of whom were already furloughed — they’d already been furloughed in July — but it was painful nonetheless,” said Cruz.

The museum committed to covering the cost of health insurance for laid-off and furloughed employees through the end of June 2021.

The Frye took a similar approach, retaining all employees who received their health insurance coverage through the museum, and also took out a PPP loan. That $515,800 covered eight weeks of employee salary and benefits; after that, the museum instated a nine-week furlough period, with staff about split between complete and partial furloughs.

The pandemic’s financial ramifications extended to exhibitions, too. “Large, special exhibitions with loans take a very long time to plan and at a certain point we had to commit to an exhibition schedule for 2021, despite all the uncertainty and not even knowing if we’d be open to the public,” said Langston.

Still, the Frye’s leadership decided to move forward with special exhibitions including “Black Refractions: Highlights from The Studio Museum in Harlem,” which had been slated for spring of 2020, and will instead open this May.

This is a much more affordable option than hosting a special exhibition from another institution. For that kind of show, SAM and other museums typically pay a loan fee for the work and cover travel costs — “packing, crating and shipping” — and insurance, all expenses that could be exacerbated post-COVID-19.

Pivoting to their own permanent collections is something museums may do more and more as they emerge from the pandemic with smaller operating budgets. “I think it’ll be really fun for viewers, and also for us, by the way. We on the staff will learn what we have in storage as well,” said Cruz.

Museums also embraced outdoor space where they could. Though the Northwest African American Museum did not reopen when some other museums did at the end of August (it does not have a reopening date set yet), the museum brought its mission outside through a book giveaway program that could be conducted in public spaces with social distancing.

“The books that we give out center Black characters,” said NAAM’s L. Patrice Bell, director of guest services and external affairs. “What we learned … is that Black main characters are only represented at 11%” in children’s books.

The program was an area of growth in a year of attenuation. The museum’s shop sales and attendance numbers had been growing when the pandemic began, said Bell. The pandemic cut off NAAM’s revenue streams, and the museum’s team of 12 was at one point furloughed down to four.

Chihuly Garden and Glass also pivoted to the outdoors. The space was able to reopen toward the end of July at 25% capacity and with enhanced cleaning and sanitation measures. The exhibition space has the benefit of an outdoor garden that was a “safe place for people to get out and explore,” said Amanda Lansford, public relations manager for the space, as well as the Space Needle.

But she encountered a different problem: The Centers for Disease Control and Prevention’s no-sail order and the Canadian cruise ship ban meant a major drop in visitors. Chihuly Garden and Glass and the Space Needle offer dual ticketing, and up to three-quarters of visitors are out-of-town guests, said Lansford.

Without the usual tourism traffic from cruise lines to the Seattle Center campus, she said, there was “a significant loss of visitation compared to, say, 2019,” when tourism in Seattle was thriving and cruises were packed.

Some small-ship cruises have resumed, but it’s unclear if and when the big cruises will meet federal health guidance required to resume operations. “To have that whole industry gone in a second, it’s going to be really impactful,” said Lansford. Things had improved, she said, but “we’re going to have a long road ahead of us.”

Still, stability seemed closer in reach than it had a year ago. Lansford said she could see activity slowly returning to Seattle Center. “We can tell it’s getting busier, MoPOP’s open,” she said. “There are more people looking for something to do … it’s great to feel that vibrant life again on campus.”

A gradual recovery has been underway for months at other institutions, too. NAAM’s Bell said that her team had grown to five after reinstating one previously furloughed employee in January. She also said the museum’s annual Unity Benefit fundraiser, held online last year, brought in nearly twice the proceeds it had in previous years, and that the summer’s uprisings against systemic racism had inspired renewed interest in NAAM’s areas of focus. “A lot of people want to prove right now that they believe that Black lives matter … I just hope that they continue to believe that Black lives matter … when there aren’t protests happening,” she said. “We still have work to do.”

In September, the Frye was able to reinstate all 40 of its furloughed employees, said Langston. Between cuts and fundraising it was able to bring in through programming changes, the Nordic Museum ended the year with “a modest deficit of 1.5% of our original operating budget,” said Anderson.

“The unknown is really what was the toughest. It continues to be,” said Cruz. “We still don’t know exactly when we’re going to be back to normal, or what that normal is going look like.”

At SAM, which is working off a budget now that’s about 25% lower than in 2018-19, the downtown museum has reopened with reductions in scheduling and capacity. Its Seattle Asian Art Museum is slated to reopen to the public May 28, a major step forward after it had opened its doors last February following a major renovation, only to have its return cut short by the pandemic after just six weeks.

Still, these are only steps toward normalcy. The uncertainty raised by COVID-19 will likely last as long as the pandemic does, and though an increasing number of Washingtonians have received full vaccinations against COVID-19, cases continue to trend upward nationally and locally.

Says SAM’s Cruz: “Being flexible is a challenge in the face of the unknown.”