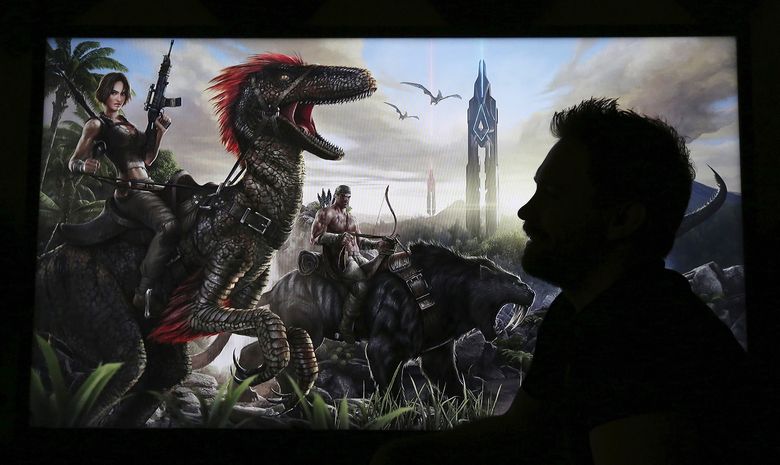 Jesse Rapczak, co-founder and co-creative director of Studio Wildcard, an independent gaming developer in Bellevue, is silhouetted against an “Ark: Survival Evolved” image of a warrior, left, that a player can customize as it rides a Utahraptor Prime — sort of a T-Rex redhead. (Alan Berner/The Seattle Times)

High-profile, expensive-to-produce blockbusters continue to dominate the video-game market. But small, independent shops are finding it easier to produce a big hit — and quickly.

Jesse Rapczak left his job helping design the HoloLens headset, one of the most ambitious Microsoft projects in decades, to chase a simple premise: Nobody has made a great dinosaur video game.

A year later, his bet has clearly paid off.

The crazy part? It’s not finished.

“It took a lot of people by surprise,” Rapczak said. “Us included.”

Welcome to the new world of game design, where a pocket-size office full of coders, artists, and a good idea can produce a hit in a few months.

With the holiday season’s surge in video-game sales under way, blockbuster titles produced by big studios, some at a cost of more than $100 million, will likely top the charts. Those are the likes of Electronic Arts’ “FIFA” or “Madden” sports series, Activision’s “Call of Duty” or Microsoft’s latest “Halo” sci-fi shooter.

But with the help of increasingly sophisticated game-building software and easier access to distribution tools, independent studios are playing a more prominent role in the business.

Video gaming at a glance

Video games existed as side projects of programmers dating back to the earliest modern computers. The industry started to blossom in the form of arcade games during the 1970s and 1980s, then moved to mainstream living rooms in the 1990s with TV-linked game consoles from companies like Atari and Sega, franchises like Nintendo’s Mario, and the birth of the personal computer. Games have since followed consumer technology onto the Internet, smartphones and tablets, creating a huge, multibillion-dollar business.

Hardware: About 51 percent of U.S. households own a dedicated game console.

PC: The personal computer is the hardware for numerous titles and distributors. They include Bellevue’s Valve, which distributes games on its Steam platform.

The number of publishers creating games for Sony’s PlayStation and Microsoft’s Xbox platforms this year is up 49 percent from a year earlier, according to EEDAR, a video-game market-research company in California. Steam, the computer-game distribution platform owned by Bellevue’s Valve, is on track for a 62 percent increase in its own game tally, EEDAR estimates.

The Seattle area has been a focus of the video-game industry for decades. Nintendo’s North American unit and Microsoft are neighbors in Redmond, the anchor tenants of a community also home to big studios like Valve, Big Fish and PopCap. A host of smaller studios are clustered in Seattle’s Pioneer Square, Bellevue and Kirkland, along with a small-but-growing network of virtual-reality companies.

Game developers, hardware makers and related companies directly employed 17,400 people in Washington state in 2013, according to a study by the Economic Development Council of Seattle and King County and the Washington Interactive Network industry group. Companies in the industry statewide brought in more than $19 billion in revenue that year, the study showed.

From small groups to big business

Like the broader software industry, video-game making has its roots in the U.S. in small groups of (mostly) men who got together to pursue an idea and build something interesting.

The industry swung toward big business by the late 1990s. Big game publishers held the keys to the expensive process of stamping CDs or DVDs and lining up relationships with brick-and-mortar retailers. Video-game console makers Sega, Nintendo, Sony and, later Microsoft, exercised tight control over their domains.

The Internet helped change that.

Widespread adoption of broadband meant games could be more easily downloaded, rather than accessed from a physical disc bought from a store. Increasingly sophisticated game engines, or software-programming tools that give developers a head start on building digital worlds, brought developers’ costs down.

“That took a lot of the work out of building the basics,” said Dave Hagewood, founder of San Diego game developer Psyonix. “You could focus on the game play, not inventing new technologies.”

The big guys started to take notice of the growing constituency of smaller developers.

Adam Boyes, a vice president with Sony who courts game developers, says the company’s policies toward independent studios a decade ago were “prehistoric.” Faxes and credit checks were requirements to get onto the console. So was sponsorship from a major publisher. Sony decided to change that.

“We wanted to make sure that all those things that intimidated small teams were out of the way,” Boyes said.

As the company was preparing to launch the Play­Station 4 console, executives made a symbolic decision that reflected the growing importance of independent studios. They decided to share their plans for the console with independent developers at the same time as the major studios.

Groups of about a dozen developers were shepherded into hotel rooms around the U.S. for briefings. Their feedback was passed on to the company’s Japanese headquarters to help inform the console’s design.

Other game-console companies were heading in a similar direction, but some independent developers say PlayStation’s relatively early efforts won them some loyalty.

Part of the payoff: Psyonix, enticed by some early Sony indie-friendly policies, stuck with PlayStation (as well as the PC platform) when it released “Rocket League” in July.

In the game, teams of rocket-powered cars compete to push a giant soccer-ball like object through a set of goal posts. Reviewers and gamers found “Rocket League,” unusual concept as it was, surprisingly fun and addictive. It went on to sell millions of copies.

Under the old, publisher-as-gatekeeper model, Hagewood says, the game might not exist.

“It’s not a simulation, it’s not a shooter, it’s not a racing game,” Hagewood said. “Publishers have to be very risk-averse. If your game is coming through, and it doesn’t fit those models, it’s very difficult for them to take a bet on it.”

That’s not to say it’s an easy road for independent developers. Cutting through the noise to reach customers scattered from mobile games to consoles, PCs and Web browsers is becoming an expensive, make-or-break challenge.

Undead Labs, an independent studio of about 50 employees in Seattle’s Pioneer Square, ran into that this summer.

The studio’s 2013 debut, zombie survival game “State of Decay,” hit the market while the horror genre was hot in popular culture. “The Walking Dead,” the zombie TV drama from AMC, was just starting to smash ratings records.

But Undead’s sophomore effort, a multiplayer, Pokémon-like pocket-monster battle game called “Moonrise,” was released this year for PC and Apple’s iOS. It flopped, and Undead will shut the game’s servers at the end of the year.

“If it’s not pulling people into the game experience, then you’re not going to make money,” said Ted Woolsey, who joined Undead from Microsoft in June to manage the studio’s business side. “There’s a science behind it that’s pretty hard and cold. You learn some hard lessons that way.”

Now, Woolsey says, Undead is plugging away on an unannounced game.

“State of Decay” “was a great hit out of the box,” he said. “We know as a studio we have to step up our game. The next one has got to be much, much more polished.”

A longtime video-game artist and director, Rapczak left Microsoft last December. He ultimately assembled a team of about 50 people, some based in a two-room rented office in a Bellevue office park, others working remotely elsewhere in the U.S. and abroad.

The genre of open world games like “Grand Theft Auto” or Undead’s “State of Decay,” where players pilot their character through a world without the tight control imposed by a linear story, was taking off. An untapped corner, Studio Wildcard thought, was dinosaurs.

The game puts the player in the shoes of a man or woman, dropped alone on a massive island populated by dinosaurs. Survival is the first priority, with players building a shelter, and ultimately acquiring weapons and tools to tame and feed dinosaurs.

Not necessarily historically accurate ones. This is a game, after all, not a paleontology simulation.

“We’re definitely not based in science,” Rapczak said. “King Kong ape? Sure. Dragons? Sure.”

The team set its sights on a November 2015 deadline, before a more aggressive one emerged. “Jurassic World” was set for a June release.

The team raced to cobble together a viable game, beating the movie by a week. A raw version of “Ark: Survival Evolved” was released for PC on June 2 through Steam’s Early Access, a program that lets developers sell in-development games before they are finished.

The game’s success took care of the problem of funding work to complete the game, and other versions. Rapczak says the game’s full release for PC next year will be accompanied by versions for PlayStation and Xbox.

Big studios “wouldn’t have given us any money,” Rapczak said. “The reason we did this independently is it’s too crazy.”