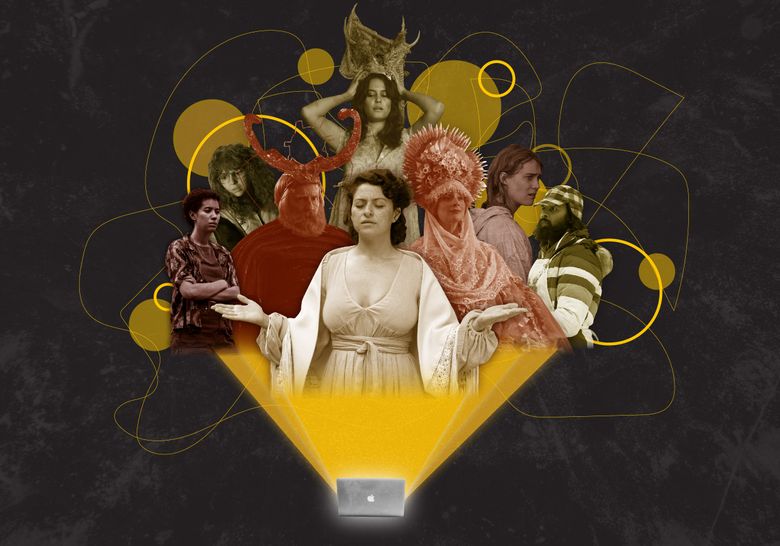 In a world of lost connections, cults on TV are bringing us together

Entering the third year of the coronavirus pandemic, television is not just a form of entertainment anymore.

The litany of canceled plans, the separation from our loved ones and the sheer unpredictability of everyday life has turned the once-mindless hobby of watching TV into a coping mechanism. When considering how many people are still working from home, out of work or otherwise disconnected from what was “normal” life pre-COVID-19, TV (and other forms of entertainment) can feel like the only reminder that there was once life before isolation.

Might we be so emotionally starved and disillusioned that we are all prime subjects to be indoctrinated into a cult? Looking at our TV viewing habits, we just might be.

Three of 2022’s most talked-about new shows — Showtime’s “Yellowjackets” and HBO’s “Search Party” and “Station Eleven” — center on the kinship people build together out of a collective tragedy, and how quickly that community can devolve into a vicious hivemind.

Cults often seek out the weak and vulnerable after a personal tragedy. After the collective grief of the pandemic, a little community doesn’t seem so bad — even if it involves matching tunics. And these three science-fiction shows offer fictional lessons we can apply in reality.

Cults have been building pop-culture momentum for a minute; Ari Aster’s folk-horror duo of “Hereditary” and “Midsommar” still offer popular meme fodder, and the 2018 remake of “Suspiria” holds a strong impact in Twitter film circles. But the popularity of cults peaking while people worldwide are caught in a three-year grief cycle should serve as a chilling reminder that we are all susceptible to their charms.

“Yellowjackets” follows a high school soccer team whose plane to nationals in Seattle crashes in the Canadian wilderness in 1996, tracing their adult lives in a secondary timeline. The show resembles a riot grrrl-“Lord of the Flies” scenario complete with a stellar cast (Melanie Lynskey, Juliette Lewis, Christina Ricci, Ella Purnell, Jasmin Savoy Brown) and a kick-ass soundtrack of deep alternative ‘90s cuts.

The girls ultimately spend 19 months in the woods. At first, the team manages, leaning on each other for any hope of survival. Lottie, heavily medicated her entire life for mental illness and supposed premonitions, finds a clear consciousness amid the chaos (and off her medications) and becomes a sort of spiritual prophet with supernatural visions. After try-hard team manager Misty accidentally poisons the group with foraged psilocybin mushrooms, Lottie dons a deer skull as the group’s so-called Antler Queen. A new social hierarchy is established, and the intoxicated girls nearly sacrifice a fellow survivor — setting a clear example for those who go against the pack.

A cannibalistic, pelt-clad cult is teased but never fully explained in the first season, but the onset of winter in the season finale raises the stakes. A girl dies; the group further devolves to a feral mindset. All the while, occult symbols are found engraved at the campsite as paranormal forces creep in. The symbols follow the girls 25 years after the incident as they attempt to move on, lay low and live “normal” lives.

Spawning rabid fan theories on Twitter and Reddit, “Yellowjackets” was arguably the first viral show of 2022. The show displays how cults purportedly help those in need after crisis, but all bets are off when the weak no longer serve the group.

The team aspect and mysterious symbols in “Yellowjackets” build cult themes into the story from the start, but the fifth and final season of HBO Max’s off-kilter comedy “Search Party” has taken a less direct (and lighter) approach: The show has grown from an irreverent millennial satire in its first four seasons to, in the new season, a zombie apocalypse brought on by main character Dory Sief’s (Alia Shawkat) self-indulgent quest to bottle and sell her own sense of enlightenment.

Dory has retained a manipulative power over others throughout the show. Between a vigilante search for justice that ends in murder, the ensuing viral court case, a hostage situation and more, Dory regularly subjects friends Portia and Elliott to her schemes and trauma. Dory takes up a permanent space in their lives, making them guilty by association for conceding to her delusions.

During a near-death experience that leads into the new season, Dory has a vision that she is the only person who can save the world from utter destruction — so she builds a social following resembling Jonestown if organized by Gwyneth Paltrow’s Goop. She links with an eccentric tech tycoon to develop her enlightenment pill, enlisting social media influencers as disciples to spread her message: Your salvation is coming via Instagram.

Dory strips her followers of their names and identities, referring to them only as colors. Hoping their leader will take pride in their dedication to the cause, her disciples give each other chemical burns to “become” their color.

The finale reaches a climax when Dory comes upon a group of her followers outside her Brooklyn apartment. They clamor for their savior as Dory climbs on top of her van and throws enlightenment pills to adoring devotees, her arms outstretched over the blurry crowd like an angel.

As hard as her friends tried to halt Dory’s plans, she maintained that anyone against her would be doomed — very typical of the “us versus them” mindset weaponized by cults. She ended up taking everyone down along with her mission.

If all of this cultish community sounds a little too close for comfort, HBO Max’s adaptation of Emily St. John Mandel’s novel “Station Eleven” makes a better case for how collective group effort might see us through the end of the world.

On the night a deadly “Georgia flu” pandemic begins to break in Chicago, acclaimed actor Arthur Leander dies onstage. An 8-year-old actress named Kirsten is abandoned as the theater clears out; one audience member, Jeevan, takes her to his brother Frank’s high-rise apartment on the Lake Michigan waterfront, where they watch the apocalypse unfold in the streets below.

Twenty years after the pandemic that becomes colloquially known as Year Zero, Kirsten travels with a nomadic group of surviving actors and musicians called The Traveling Symphony, performing Shakespeare around the Great Lakes and collecting relics of the old world from abandoned houses to make sets and costumes.

On their travels, the group comes across a city led by the Undersea cult and a rugged, bearded figure known as The Prophet, who takes child brides, believing those born after the collapse of humanity are clean, having avoided the trauma of the apocalypse. In the aftermath of the Georgia flu outbreak, which kills 99% of those infected, The Prophet and his mother Elizabeth embrace a zealous elitism with the belief that the pandemic happened for a reason, sparing the good.

Kirsten, The Prophet and Elizabeth are connected by something deeper than circumstance, though we’ll avoid that spoiler. Recognizing The Prophet’s sinister side, Kirsten keeps to her own found community in the symphony. The confrontation recalls the feeling when a family member is revealed to be a QAnon supporter — realizing that familiarity does not mean we see eye to eye.

But Kirsten would have never survived the end of the world without the help of Jeevan and The Traveling Symphony, determined to rebuild the world better than it was before.

The juxtaposition of a close-knit community, one that supports Kirsten’s individual needs in a time like the apocalypse when everyone is struggling, distinguishes the group from the Undersea cult, which subsists off an unfounded sense of elitism and whose main concern is maintaining superiority. Communities care for the individuals, whereas cults only care for the group.

Most would like to think they’re too smart to be pulled into a cult, but as these three TV shows reiterate, that’s what’s so insidious about cults. Their charismatic leaders strike in moments of crisis and desperation when you have few other options — and hopeless desperation is not an unfamiliar feeling these days.

Maybe these shows can serve as a warning, but I think they might be a reminder that we won’t get out of this without each other. Just watch out for enlightenment pills, false prophets and anyone hankering for human flesh.

Kurt Suchman: kurtsuchman@gmail.com; Kurt Suchman is a freelance writer based in Seattle who is focused on music, food, culture and queer topics. Their work has been featured in Food52, Xtra magazine and elsewhere.
View Comments
Posting comments is now limited to subscribers only. View subscription offers here. For more information, visit our FAQ's.