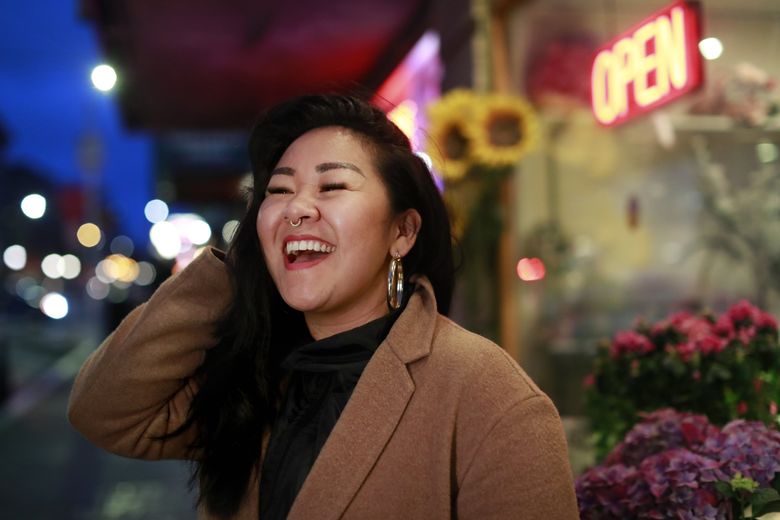 'They're not ready for me' Seattle theater artist, activist Sara Porkalob prepares for Broadway debut

Sara Porkalob, an actor, musician, director, storyteller and activist, has seemed to be everywhere on and behind Seattle stages in recent years. She recently took her acclaimed show “Dragon Lady” to the East Coast and is now prepping for her Broadway debut. (Erika Schultz / The Seattle Times)

How do you tech a Broadway-bound musical production on Zoom?

According to Sara Porkalob, who’s set to star in the revival of “1776,” it’s not much different than running a technical rehearsal in real life.

She’s delved into research with the cast, listened to guest speakers and looked at costume designs, but she has also discovered small perks of the online format, like being able to simultaneously cook lunch or tend to the plants in her Pioneer Square apartment.

The coronavirus pandemic has forced unconventional times like this, and ravaged the theater community — shuttering small theaters and Broadway behemoths alike, and putting many theater artists out of work.

Initially, the same loss appeared apparent for Porkalob, the Seattle-based theater artist, musician, actor, director, storyteller and activist who was seemingly at the top of her career when the crisis broke. Porkalob had received widespread acclaim for her self-written-and-acted “Dragon” series, a trilogy based on the true stories of her family’s history, and she was named one of The Seattle Times’ 11 movers and shakers to watch this decade, and was getting ready to move to New York for “1776” rehearsals.

Coronavirus-mandated shutdowns threw Porkalob for a tailspin, forcing her to cancel some of her local projects, and initially making it unclear whether “1776” rehearsals would be postponed, if not canceled.

Despite the uncertainty of her own future — and that of the country’s theater scene as a whole — Porkalob is using her perseverance and talent to achieve her goal of telling stories to the world. A worldwide pandemic can’t stop her.

“They’re not ready for me,” said Porkalob.

Less than a week before a statewide shutdown that turned the local theater world upside down, Porkalob sat in a coffee shop in the Chinatown International District — one of her favorite Seattle neighborhoods — reflecting on her rise to fame, and all that led to her upcoming Broadway gig. But more than the writing credits or critical acclaim, the thing she talked about most was family.

“They’re the most talented group of (expletive) I know. You think I’m talented? Psh, that’s a joke!”

Porkalob, 31, was born in Bremerton and grew up surrounded by a large extended family, consisting of her two moms, grandma, aunts, uncles and cousins.

“I can trace every one of my accolades, stories or idiosyncratic tendencies to someone in my family,” Porkalob said. “My family is everything. They never taught me to prioritize anything other than being myself.”

Some of her earliest memories include singing karaoke with her aunts and uncles, dancing in her living room and watching musicals with her mom. Her family inspired her love for music, and they noted her glowing talent early on.

“I remember when she was 3 years old, sitting on the neighborhood corner singing, that’s really when I knew, this is her destiny,” said her aunt, Anna Porkalob.

After high school, Porkalob attended Cornish College of the Arts, where she majored in theater, and began to see how her work in the arts intrinsically wove with her activism elevating marginalized communities.

“I came to understand how activism and my passion of storytelling were in relationship to each other,” she said. “Deriving meaning from that gave me a lot of purpose in this world.”

Her education opened her eyes to the ways in which the entertainment industry has historically been more accessible to straight white men and women, and she made it her mission to use her work as a way to dismantle the systems that excluded people of color, and other marginalized communities.

“As a woman and as a person of color, I didn’t really see narratives on the stages that looked anything like me, or anything like my family,” said Porkalob in a 2017 interview. “I decided that I needed to reassess what I was doing with my art form and how to use that as a tool for the things that I care about.”

“The hustle is real”

After college, Porkalob quickly connected with Seattle’s art scene, performing in several shows produced by local theaters. Porkalob says that one of the perks of working in a smaller theater community like Seattle is the space it allows to play different roles in the industry, including acting, writing, directing, singing and more.

Beyond being work partners, Porkalob and Lieu are good friends; their conversations seamlessly wove between how Lieu can better flesh out certain metaphors, to swapping tips on the best hand cream.

Building such relationships and finding a community has been crucial to Porkalob’s growth in Seattle’s theater scene. And connecting with people like Lieu allows her to have even greater insight into creating better work.

“Between our family history — being women growing up in Asian immigrant families — and the many roles we’ve played, we fit into a very small part of the Seattle theater Venn diagram,” says Lieu. “We both have learned to wear so many hats, and be really self-reliant in order to succeed. The hustle is real.”

“She listens and she’s open and she’s collaborative. It’s really those skills that make her phenomenal,” said Kathy Hsieh, a longtime theater artist, advocate for artists of color and cultural partnership and grants manager for Seattle’s Office of Arts & Culture. “From the very beginning I knew she was going to go far.”

This past year, Porkalob worked with the city’s Creative Strategies Initiative, which uses arts- and culture-based approaches to build racial equity in areas like the environment, housing and community development.

She’s conscious in her work of how she can uplift others around her.

“If I live in a city, I have a responsibility toward the wellness of its people,” Porkalob said. “The things that I do and create, I want to believe are in service of people — always.”

Porkalob’s family history and years of wearing multiple hats led to her biggest breakthrough: 2017’s “Dragon Lady,” a cabaret-style one-actor musical she wrote and starred in, about her grandmother’s time growing up in the Philippines.

“Dragon Lady” opened to critical acclaim, spotlighting Porkalob’s ability to seamlessly transition between characters, her powerful vocal bravado, and a story performed with exuberance and soul. A Seattle Times review called the show a “fierce, vibrant memoir,” and it went on to receive several regional theater awards.

“Dragon Lady” took Porkalob to the East Coast in 2018 and 2019, where she performed and workshopped her show at the American Repertory Theatre (A.R.T.) at Harvard University in Cambridge, Massachusetts, crafting it into part of a larger “Dragon Series” trilogy about three generations of her family.

After one of her “Dragon Lady” performances in Cambridge, Porkalob was approached by an A.R.T. director, who was so blown away by Porkalob’s performance that she offered her a spot on A.R.T.’s Broadway-bound revival of “1776.” No audition, no callbacks; she even let Porkalob choose her own part in the show.

“Immediately when I got the offer, I thought, ‘My family is going to be so proud.’”

“Of course we were ecstatic, but we knew it would happen eventually,” said her aunt Anna. “It’s just confirmation that this is what she’s destined for.”

To Broadway and beyond

After a stint performing in Baltimore, Porkalob returned to Seattle last December, with plans to leave again in late March for “1776” rehearsals.

Her extended time on the East Coast made her realize how important Seattle was to her.

“Right when I stepped off the plane into Seattle, I was like ‘Whoa.’ The physical space here, the mountains and water, and culturally, like having access to the ID and seeing my people — it was huge.”

As a sort of “farewell tour,” Porkalob spent the ensuing months immersed in the community, simultaneously working on over a half dozen projects, including directing “The Angel in the House” at Café Nordo, putting on “Alex & Alix” at ArtsWest, and culminating in a week of “Dragon” performances right before she left Seattle.

But just days before Porkalob’s 31st birthday, Gov. Jay Inslee banned large gatherings due to the coronavirus pandemic. Porkalob realized she’d have to cancel her “Dragon” series, and that her Broadway trip would likely be postponed.

“I really let myself be sad for about three or four days. But after that, my realistic side started to kick in, and I looked to how this was impacting everyone in the arts community. Now I’m trying to figure out how to hold space for and share resources with my peers.”

Porkalob says that, if anything, lockdown has afforded her time to take a break — breathing room that she hasn’t had in years.

“This is a slowdown for me, and because of my privilege — financially, physically and emotionally — it’s afforded me a lot of time for reflection on where I’ve been, where I want to go, my hopes for my community, and just preparing for how much things are changing.”

But her days are mostly filled with preparing for Broadway. Though postponed, the show — a co-production between A.R.T. and Roundabout Theatre Company — will go on, and A.R.T. has committed to a spring 2021 debut of “1776,” featuring an all-female, nonbinary, trans and genderqueer cast. While official dates are yet to be announced, the show is slated to open at A.R.T., tour multiple U.S. cities, then transfer to Broadway’s American Airlines Theatre.

Porkalob will play Edward Rutledge, the youngest signer of the Declaration of Independence. She chose the part because Rutledge’s solo song, “Molasses to Rum,” was her favorite in the show, and she liked his dialogue, which she described as “spicy.” Rehearsals for “1776” have already started via Zoom, and despite being online, the process is running smoothly.

“With things like chat functions and being able to see everyone at the same time, in some ways, it feels even more intimate than being in the room,” said Porkalob. “I think everyone is coming into it really thankful and happy.”

While Broadway may seem like the pinnacle of success for theater artists, Porkalob says that it’s just a step in the journey to be able to share her stories with the world.

“In a lot of ways, people will probably look at this moment as when I’ve made it. But really, I made it when I placed me, my audience and my integrity first.”

Ultimately, her aspirations will likely bring her back to the Pacific Northwest.

In her time touring with “1776,” Porkalob hopes to learn about how Seattle’s theater scene fits into the country’s as a whole. And what she learns about how others operate across the country could fit into one of her long-term goals: running for city council one day.

“I really care about this place, have seen its inequities, and want to enact change,” said Porkalob. “I’m looking to be inspired by how others are strategizing and resisting and unifying their communities.”

“Seattle will always be home,” Porkalob said. “I’m leaving Seattle so I can come back and be better.”