The Emmy Awards were back to being mostly in person after last year’s virtual ceremony, with TV’s best and brightest amassing in a classed-up event tent with banquet-style seating reminiscent of the Golden Globes.

It was a more informal approach to TV’s biggest night, one that was not appreciated by all attendees as the delta variant rages on. (“There’s way too many of us in this little room,” said Seth Rogen, the night’s first presenter.) But the new format was apt for a night that perhaps heralded a new chapter of TV history, or at least the official recognition of the streaming-dominated era most of us already take for granted.

For the first time, streaming services won all of the major series awards, with Netflix’s “The Crown” winning top drama and “The Queen’s Gambit,” also on Netflix, taking best limited series. “Ted Lasso,” on Apple TV+, was named best comedy. These shows and a couple of worthy challengers — “Hacks” on HBO Max, “Mare of Easttown” on HBO proper — dominated the categories.

The result was an awards ceremony that both signaled new beginnings and announced a handful of titles over and over and over. In the time between, it suggested that for all of TV’s evolution, some aspects of the Emmys — dud bits, overlong speeches, occasional moments of true inspiration — will always be with us.

Cedric opened with a tribute to TV … and Biz Markie.

Cedric the Entertainer promised that with him as the host, the Emmys broadcast would be a little different this year. Different how? The first hints arrived immediately, when Cedric put off the traditional opening monologue in favor of a song that immediately infused the show with energy.

“TV, you’ve got what I need,” he sang, riffing on the song “Just a Friend” by Biz Markie, who died this past July. Rita Wilson, LL Cool J, Lil Dicky and others joined in with verses of their own.

Cedric did eventually offer a traditional monologue after the first two awards, variously skewering The Met Gala, Nicki Minaj and Billy Porter. “Look at this room, man, so many talented people in here,” Cedric said. “Matter of fact, lock the doors — we’re not leaving until we find a new host for ‘Jeopardy!’”

Related More on the Emmy Awards 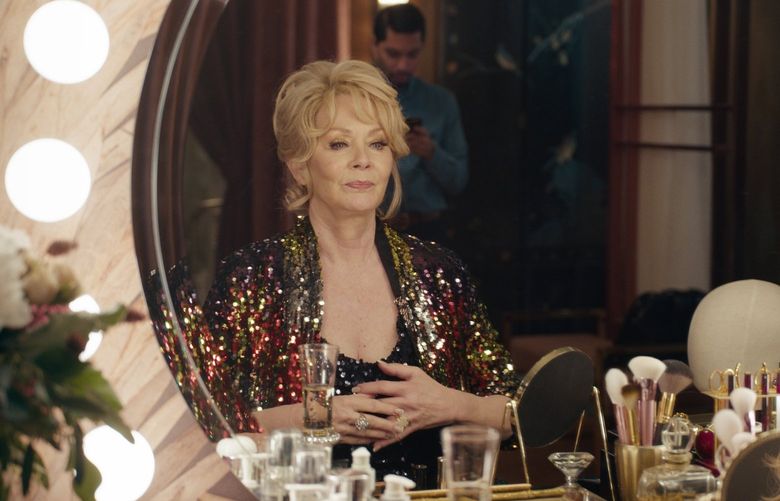 Is there an echo in here?

In the first hour of the show, the first two awards went to “Ted Lasso,” the second two to “Mare of Easttown,” the next four to “The Crown” and then the next two to “Last Week Tonight With John Oliver.”

I’m not saying these aren’t good shows — some of them are great shows! But there’s a lot of variety on television, more than the Emmys seem to know about. Monotony is a vice.

‘Hacks’ gave ‘Ted Lasso’ a run for the money.

The relentlessly optimistic Apple TV+ comedy “Ted Lasso” was expected by many prognosticators to clean up in the various comedy categories on Sunday. But after a couple of hours, the night had evolved unexpectedly into a two-horse race between that show and the more acerbic HBO Max showbiz comedy “Hacks.”

“Ted Lasso” started strong, taking home top honors in three of the four comedic acting categories, including a best actor Emmy for Jason Sudeikis. The show was also nominated for best comedy writing and directing, but in something of a surprise, both of those awards went to “Hacks.”

The HBO Max series picked up its third straight award when Jean Smart won for best comedic actress. Suddenly, the best comedy category, which had seemed like a lock for “Ted Lasso,” got more interesting.

But only for about an hour. In the end, “Ted Lasso” took the top trophy, as expected. The suspense was fun while it lasted.

I love “Ted Lasso,” but this is too many times to hear the opening bars of its theme song.

Perhaps next time a show is nominated multiple times in multiple categories, the nominee clip segments can use a variety of music from the show, and not just the same 1.5 seconds over and over, and then maybe when people from that show win, we can also shake up some of the music design.

Debbie Allen, the actor, writer, director, choreographer and producer (among other things), was given this year’s Governor’s Award. It is a de facto lifetime achievement honor, but Allen is still plenty productive — last week she won two Creative Arts Emmys for her work on “Dolly Parton’s Christmas on the Square,” for Netflix.

“It’s taken lot of courage to be the only woman in the room most of the time,” Allen said in a pointed speech that paid tribute to all women, all over the globe. “Let this moment resonate with women across this country and across the world, from Texas to Afghanistan.”

She continued: “Young people who have no vote, who can’t even get a vaccine — they’re inheriting a world that we leave them. It is time for you to claim your power, claim your voice, say your song, tell your stories. It will make us a better place. Your turn.”

It was a good reminder that while much of TV looks far different from it did even a few years ago, some of its most transcendent talents have been at this for decades.

After it was snubbed by the Golden Globes, the HBO limited series “I May Destroy You” received some measure of awards justice when it received six Primetime Emmy nominations.

And on Sunday night, Michaela Coel — the show’s creator and star, as well as a writer and co-director — won her first ever Emmy Award, for limited series writing. That also made her the first Black woman to win in that category. In her acceptance speech, Coel told the audience to “write the tale that scares you, that makes you feel uncertain, that isn’t comfortable.”

“I dare you,” she continued. “Visibility these days seems to somehow equate to success. Do not be afraid to disappear from it, from us for a while, and see what comes to you in the silence. I dedicate this story to every single survivor of sexual assault.”

Conan won only our hearts.

Conan O’Brien, who wrapped up nearly 30 years as a late-night host in June, didn’t win any awards on Sunday night. But perhaps no one had more fun.

He mugged for the cameras when John Oliver — who once again won the variety talk Emmy — paid tribute to him during his acceptance speech. He enlivened the annual energy vacuum that is the address from the Television Academy president. And when “The Late Show With Stephen Colbert” won for best variety special, for its live election show, O’Brien bounded onstage with the show’s contingent.

“Most of the people behind me really deserve this Emmy right now,” Colbert said. But O’Brien deserves our appreciation for inserting a note of chaos into a long night of predictable self-congratulation.

‘Mare of Easttown’ put ‘The Queen’s Gambit’ in check … but not for long.

As has often been the case in recent years, the best limited series trophy seemed the most up for grabs among the top awards heading into Sunday night. The picture grew sunny early for the somber HBO murder mystery “Mare of Easttown,” after the supporting actress and actor awards were snatched up by Julianne Nicholson and Evan Peters.

The series, which garnered praise for the way it nailed the look, feel, sound and salty attitude of the people of Delaware County, Pennsylvania, became appointment viewing last spring. Its odds for winning the top prize seemed only to increase when Kate Winslet also won best actress for her role as the title character, Detective Mare Sheehan.

Like Anya Taylor-Joy’s drug-addled chess champion, however “The Queen’s Gambit” was not easily vanquished. Although it came up short in the acting categories, it won big on look and feel — 11 Emmys total, including for direction, cinematography, editing, costumes, makeup and music — and went on to win the top limited series prize.

HBO’s “A Black Lady Sketch Show” may not have won an Emmy against the perennial hardware-collector “Saturday Night Live.” But in a few seconds, its star Robin Thede showed why she is one of the biggest talents in TV comedy right now. Her comically incensed response to the announcement was a sketch in itself, testimony to the outsized characters she embodies on her own show. Maybe before long that’ll take her all the way to the acceptance podium.

Hamilton Is Not TV.

The Revolutionary War musical, which won the Emmy for prerecorded variety special(!), is a remarkable work of theater. It deservingly won Tonys for that.

That it was captured on camera does not make it television — at least not the kind of TV art the Emmys should reward over the likes of Bo Burnham’s “Inside,” a stunning and original treatment of isolation and digital overload in a year much of its audience spent bouncing off the walls.

Olivia Colman’s Emmy win for best lead actress in a drama for her portrayal of Queen Elizabeth II on Netflix’s “The Crown” created an unusual situation on Sunday. Two different actors have now won that award for playing the same role in the same series.

Colman took over the role for the third and fourth seasons of the popular Netflix series as part of a broad, preplanned change over of the show’s principal characters meant to help better reflect their advancing ages.

And so now, away goes Colman after her two-season turn as queen. And in will step Imelda Staunton for Seasons 5 and 6. We won’t know until next year whether she will complete a royal Emmy trifecta.

Beth Harmon spent less time on many victories than Scott Frank did on his victory speech.

The co-creator of “The Queen’s Gambit,” who won an Emmy for directing in a limited series, defied the play-off music not once, not twice, but three times as he read from his acceptance essay. Twitter, as is its wont, noticed.

The series may be limited but a creator’s self-regard? Maybe not. TV keeps on changing but the Emmys are eternal.