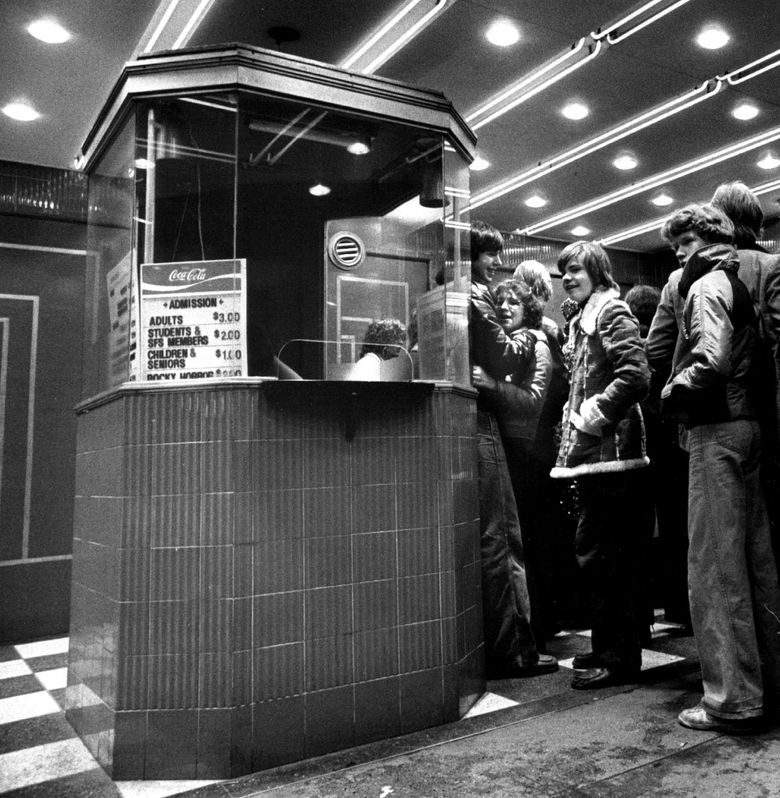 The Neptune Theatre’s 100th anniversary is Nov. 16. To commemorate the event, we’ve compiled some of your memories and photos of this historical Seattle venue.

Submissions have been edited for length and clarity.

“My family owned and operated the Neptune Theatre for a good number of years way back in the day. Since there were eight children to put through college, my dad’s solution was to buy both the Edgemont Theater in downtown Edmonds and the Neptune Theatre in the U District. It certainly worked, as we all went to the University of Washington and Seattle University.

Among my favorite memories was screening ‘The Rocky Horror Picture Show’ to the army of costumed fans of the movie who flocked to the midnight shows every weekend to shout out the lines, dance to the music and mimic the actors. My dad, James Kniest, was especially fond of that cult flick as ‘it paid the bills!’ That movie and hundred of others we booked at the Neptune put me through college! Go Huskies!”

“Oh, so many magical moviegoing memories! I started going to the Neptune in the early 1980s and repertory was in full swing. I first saw Ken Russell’s ‘The Devils’ at the Neptune in 1984 and a double feature of ‘Zardoz’ and ‘The Man Who Fell to Earth’ after enjoying some tasty brownies that afternoon. Amazingly, I first saw ‘The Rocky Horror Picture Show’ at the eighth anniversary of the film, and the Neptune was completely sold-out with lines going around the corner and down the block. The entire audience was jazzed for it and costumes and rice and toast were everywhere. I couldn’t hear any of the movie at all because people were yelling at the screen throughout the entire film.

The Neptune was so mysterious with its dark … blue sea motif, and those portholes and front deck ship really made filmgoing a true journey. The Neptune forever!”

“Spring 1970 was the likely year that my rock band, Dancing Bare, played onstage at the Neptune Theatre. It was a late night performance, not particularly well attended, just after the University District Street Fair had wrapped up for the night. I suspect the revelers were mostly reveled out. But my bandmates, Stephen Stubbs and Stevie Adamek, and I played our hearts out for the small crowd just the same. The Neptune was not noted as a music venue then, but our manager figured it would be a great place to play for the exposure. My memory is the music in the hall sounded wonderful. I’d love to play there again sometime.”

“I managed the Neptune for a little over a year in 1977. At the time, we ran mostly classic films: ‘The Bridge on the River Kwai,’ ‘Romeo and Juliet,’ ‘Psycho’ and the like. This classic schedule was overshadowed by midnight screenings of ‘The Rocky Horror Picture Show’ every Friday and Saturday. At the peak of its popularity, we sold out every night during my tenure. The only exception was on a snowy Saturday when we sold only 200 of the 800 seats. Those were the true hard-core fans. The first 15-20 fans in line were the same every night, and in costume.

It was crazy, it was fun, it was a lot of work. An event, and everyone were there to be seen, to participate and to have fun. I will always remember the Neptune with fondness.”

“I have countless memories from the Neptune, but none greater than seeing Wolf Parade’s return from a lengthy hiatus on Aug. 7, 2016.”

“In the fall of 1971, I took my new girlfriend on our first date to the Neptune Theatre to see ‘Shaft,’ the film with the great Isaac Hayes soundtrack (‘He’s a bad mother …’). Little did I know that this date would lead to us getting married in 1976. We have subsequently gone to shows there as recently as 2018.”

“At 19 in the early 1980s, I worked at the Neptune Theatre, meeting lifelong friends, cinephiles and lost souls, all drawn to the double features of classic, indie, foreign, camp and cult films dished up daily. A penniless art student, I gobbled up free popcorn and an education in cinema, from Fellini and Tarkovsky, to Waters and Gilliam … endlessly illuminating. I sold refreshments from the wooden ‘concession ship’ and tickets from the outdoor booth, cleaned between features, a recording of Jean-Michel Jarre’s bubbling synth music filling the blue auditorium with underwater ambience. Dragging a rickety ladder down the alley, I teetered above traffic and queues of patrons, often raucous ‘Rocky Horror’ devotees, quelling adrenaline to change the marquee.

Sometimes I cleaned during the wee hours, singing to dispel rumored ghosts. Although I never encountered one, surely the place is saturated with spirits. I, ever a Neptunian, would haunt it, too.”

“Getting backstage access to Seattle On Ice 2018 and photographing one of my favorite local bands — the True Loves!”