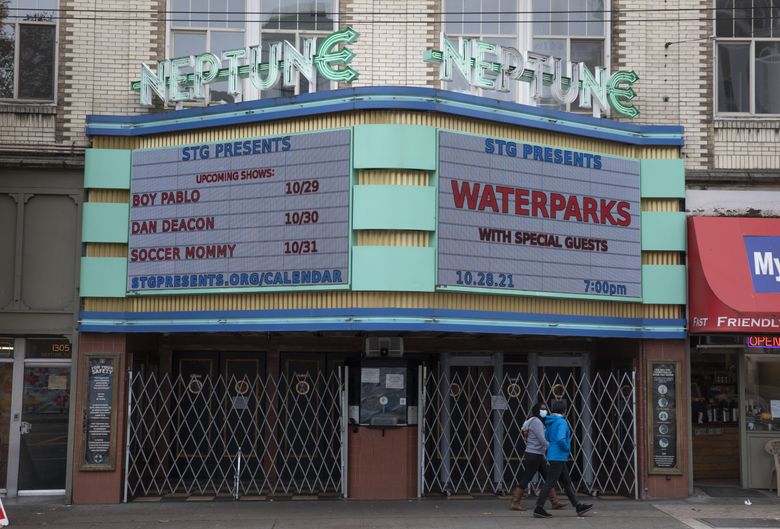 One hundred years ago next week, in the Seattle Daily News, a small item on Page 9 announced the opening of a new movie theater. Then called the U-Neptune, it was described as “Seattle’s newest photoplay palace and the finest suburban motion picture theater in this part of the country.”

With a capacity of more than 1,000, the U-Neptune (soon to be rechristened as just the Neptune) featured “all of the latest ideas” in theater ventilation, lighting and seating, as well as a men’s smoking room, ladies lounge and “public telephone rooms.” The decorative scheme was nautical, centering on the king of the sea for whom the theater was named, and rendered in shades of blue and taupe; the paper reported that the ushers, puzzlingly and delightfully, “will wear Dutch costumes.”

“Nothing but the best of motion picture entertainment will be featured,” the article noted, “as well as the best of music.”

Flash forward a century and lo and behold — the Neptune Theatre, unlike many of its comrades from the silent movie era, still stands, on the still-bustling corner of Northeast 45th Street and Brooklyn Avenue Northeast. Those Dutch costumes have, alas, disappeared into history’s mist, as has the smoking room and, for the most part, the movies. But after 90 years as a single-screen moviehouse, most recently under the auspices of the Landmark Theatre chain, crowds are still filling the Neptune in its new role as a live music and entertainment venue. The nonprofit Seattle Theatre Group has operated the theater since 2011.

STG will be observing the centennial with a special free celebration Nov. 16, open to all. An art installation by Indigenous artist Joseph H. (wahalatsu?) Seymour, acknowledging the land once inhabited by Native tribes, will be unveiled in the lobby, and the program will feature a video about the Neptune’s history and performances by Billy Joe & The Dusty 45s and Ron Artis II and The Truth.

By necessity, the theater looks a little different now, but you can still get a sense of what it was like a century ago. “We’re trying to maintain the aesthetic, but improve the systems,” said Dan Reinharz, theater manager for the Neptune in its current STG incarnation, during a recent walk-through. The theater seats are gone — live concerts require more flexibility in seating — but the Neptune heads (now equipped with LED-glowing eyes) still gaze down on the audience, the elaborate grillwork that once concealed organ pipes is still intact, and the elegant curves of the mezzanine hallway still beckon, just as they welcomed moviegoers a century ago.

That ramp design, rather than staircases, is one of the main reasons for the theater’s architectural significance, said theater historian David Jeffers. “It’s very graceful, and was unusual at the time,” he said. It was something of a trademark for local architect Henderson Ryan, who designed the Neptune and the Liberty Theatre downtown (1914-1955), a larger moviehouse that also featured ramps. (Ryan also designed the Ballard Carnegie Library building, which still stands and now houses the Kangaroo & Kiwi pub.)

Jeffers noted that the nautical theme was part of a larger trend at the time toward “atmospheric” theaters with themed décor, such as the 5th Avenue Theatre (built in 1926) whose interior was meant to suggest the Forbidden City in China. “It was a style — it goes along with the fantasy of going to the movies and escaping into some kind of other world.”

You could escape to a lot of movies in the University District back in the 1920s: According to research presented to the Landmarks Preservation Board in 2012 (which granted Seattle landmark status to the building), the Neptune was one of five cinemas that opened in the neighborhood during the silent film era, and is the only (mostly) intact survivor. It was constructed as a mixed-use building, with dentists’ offices (one of which, the University Herald noted at the time, has “the only separate sterilizing room west of New York”) and apartments upstairs. The building is still owned by the descendants of one of those dentists.

Successfully transitioning from silent movies to talkies (the organ was removed in 1943), the Neptune went through several changes of management during its 90 years as a cinema — including a brief period showing X-rated movies in the early 1970s. Like so many once-grand moviehouses, it was neglected and in decline for several decades, but the Neptune’s fortunes reversed in 1981, when Landmark Theatres took over the lease and renovated the theater, installing the now-familiar ship-shaped concession stand and painting the interior turquoise.

Throughout the ’80s and into the ’90s, Landmark ran the Neptune as a repertory house, showing double and sometimes triple features every day of classic films, cult favorites and international arthouse fare. In those prestreaming days, it was a popular destination for movie buffs — if you lived in the U District then, or anywhere near it, you likely had a Neptune calendar on your fridge. “Business was really good,” remembered Dan Long, who managed the theater for a decade beginning in 1982. “A lot of regulars would buy punch cards. We would see people a couple times a week, regulars who we got to know. We’d have nicknames for a lot of them.”

And a different group of regulars would be out in force every weekend for the Neptune’s trademark midnight sing- and speak-along screenings of “The Rocky Horror Picture Show,” which began in the ’70s and continued into the ’90s. “We’d get 500 people a night sometimes,” said Long. “It was mostly a fun party kind of thing.” To keep things fun, the theater had a security guard on hand, to weed out those who didn’t follow the spirit of the occasion — and to check that nobody was bringing in, say, 50-pound bags of rice (rice is traditionally tossed in the theater during a wedding scene, as are many other objects during the film’s running time). “People would bring full bags, we’d say, ‘You just donated that to the food bank.’”

As home video became more popular, the audience for the Neptune’s repertory programming began to wane in the ’90s, and the theater switched to first-run films, beginning, Long said, with “Grumpy Old Men” in 1993. It continued as a first-run house until Landmark lost its lease, showing its final movie — “The Green Hornet” — on Jan. 30, 2011. Though there had been talk of demolishing the theater to make way for the nearby Sound Transit station, the Neptune’s story wasn’t yet over: STG took over and began a four-month, $720,000 renovation, ensuring a new chapter.

For the past 10 years, the Neptune has been home to live performances: music, comedy, spoken word, and the (very occasional) movie. Reopening began in 2011 with — what else? — a screening of “The Rocky Horror Picture Show,” followed by a comedy showcase hosted by Luke Burbank and a concert from the Total Experience Gospel Choir. Notable performers over the decade included musicians Ann Wilson, Eddie Vedder, Cheap Trick and Little Feat; comedians Jimmy O. Yang and Marc Maron; and many more.

If you visit the Neptune today, it’s not quite the place you might remember from popcorn-filled matinees years ago. The stained-glass windows depicting Neptune (actually they’re plastic, probably dating from the ’60s, Reinharz said) are now backlit and shine brightly; the floor now has rows of folding chairs and there’s a bar in the back (with a railing, in a nostalgic gesture, made from old rigging from the Moore Theatre). Behind the scenes, things have changed as well: STG renovated an old apartment upstairs to make a cozy greenroom space for visiting artists, and drilled a hole in the stage so as to facilitate the swift removal and storage of chairs. Look up, and you’ll see a reconstruction of the theater’s original chandelier, re-created from old photos.

“I feel about the Neptune the same way I feel about the old Fifth and Pike Coliseum,” said Jeffers, referring to a once-grand downtown movie palace that most recently held a (now closed) Banana Republic. “The building is physically still there, but it is so altered, it’s not really the same place anymore.”

But for this longtime Neptune-goer, there’s still a bit of magic in those graceful hallways where a younger me once lingered, dancing the Time Warp or marveling at some beautiful movie from long ago or wondering if one of those Neptune heads might wink at me if I stared at it hard enough. Happy anniversary, Neptune. May the music and the memories linger, for many more years.