Skip to content
By
JILL LAWLESS
The Associated Press

LONDON (AP) — Queen Elizabeth II tested positive for COVID-19 on Sunday and is experiencing mild, cold-like symptoms, Buckingham Palace said, adding that she still plans to carry on working. The diagnosis prompted concern and get-well wishes from across Britain’s political spectrum for the famously stoic 95-year-old.

Britain’s longest-reigning monarch and a fixture in the life of the nation, the queen reached the milestone of 70 years on the throne on Feb. 6, the anniversary of the 1952 death of her father, King George VI. She will turn 96 on April 21.

The palace said the queen, who has been fully vaccinated and had a booster shot, would continue with “light” duties at Windsor Castle over the coming week.

“She will continue to receive medical attention and will follow all the appropriate guidelines,” the palace said in a statement.

People in the U.K. who test positive for COVID-19 are now required to self-isolate for at least five days, although the British government says it plans to lift that requirement for England this week.

Both the queen’s eldest son Prince Charles, 73, and her 74-year-old daughter-in-law Camilla, Duchess of Cornwall contracted COVID-19 earlier this month. Charles has since returned to work. There are also thought to be several recent virus cases among staff at Windsor Castle, where the queen is staying. 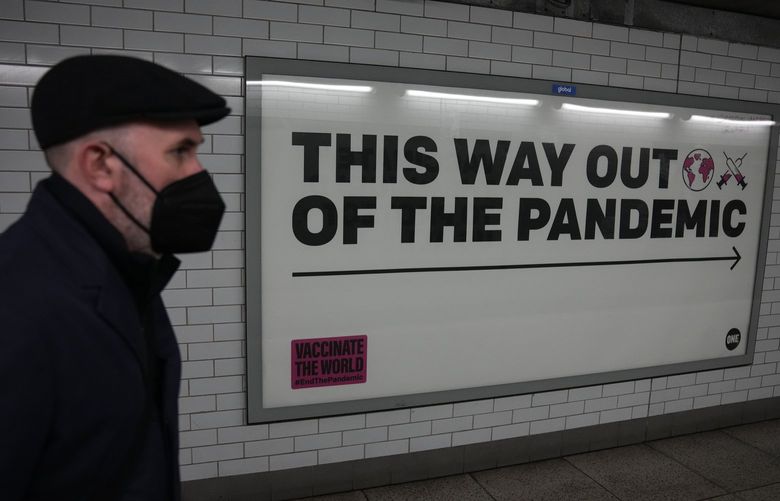 Paul Hunter, an infectious diseases expert at the University of East Anglia, said the queen would likely be given one of several antiviral drugs that have been approved in the U.K. to treat COVID-19.

“If you do get them early enough, it does reduce the risk of severe disease developing, so I would imagine any doctor for a patient in their 90s would be considering giving these antivirals,” he said.

A host of senior British politicians sent get-well messages on Sunday. Prime Minister Boris Johnson tweeted: “I’m sure I speak for everyone in wishing Her Majesty The Queen a swift recovery from COVID and a rapid return to vibrant good health.”

Health Secretary Sajid Javid wrote that he was “Wishing Her Majesty The Queen a quick recovery,” while opposition Labour Party leader Keir Starmer wished the queen “good health and a speedy recovery. Get well soon, Ma’am.”

Australian Prime Minister Scott Morrison also sent well-wishes. “We wish her a full recovery and there are few more resilient people than Her Majesty. She has demonstrated that over a long lifetime,” Morrison said Monday, according to Australian Broadcasting Corporation.

Elizabeth has been in robust health for most of her reign and has been photographed riding a horse as recently as 2020. In the past year she has been seen using a walking stick, and in October she spent a night in a London hospital for unspecified tests.

The queen’s doctors ordered her to rest after that and she was forced to cancel appearances at several key events, including Remembrance Sunday services and the COP26 climate conference in Glasgow, Scotland in November.

This month she returned to public duties and has held audiences both virtually and in person with diplomats, politicians and senior military officers. During one exchange caught on camera last week, she walked slowly with a stick and said “as you can see I can’t move” in apparent reference to her leg.

The queen delivered two televised messages to the nation early in the pandemic in 2020, and has sought to lead by example. She let it be known she had been vaccinated, and last year sat alone during the funeral of her husband of 72 years, Prince Philip, because of coronavirus restrictions.

Joe Little, managing editor of Majesty magazine, said members of the royal family are probably more concerned than the queen about her situation.

“I would guess that she will be matter-of-fact about the diagnosis in a way perhaps that the people around her are less matter-of-fact,” he said.

The queen has a busy schedule over the next few months of her Platinum Jubilee year, and is scheduled to attend in-person public engagements in the coming weeks, including a diplomatic reception at Windsor on March 2 and the Commonwealth Service at Westminster Abbey on March 14.

On March 29, she has a remembrance service at Westminster Abbey for Philip, who died in April 2021 at 99.

Public celebrations of the Platinum Jubilee are scheduled over a long weekend June 2-5, with festivities including a military parade, a day of horse racing and neighborhood parties.

The queen is the latest monarch from around the world to catch COVID-19. Queen Margrethe of Denmark, 82, and Spain’s King Felipe VI, 54, both tested positive for the illness earlier in February and had mild symptoms.

Her diagnosis comes after a difficult week for Britain’s royal family.

On Tuesday the queen’s second son, Prince Andrew, settled a U.S. lawsuit brought by a woman who claimed he had sexually abused with her when she was 17 and traveling with the late financier and sex offender Jeffrey Epstein. Andrew strenuously denied the claim by Virginia Giuffre. He agreed in a settlement to make a substantial donation to his accuser’s charity.

On Wednesday, London’s Metropolitan Police launched an investigation into allegations that people associated with one of Prince Charles’ charities offered to help a Saudi billionaire secure honors and citizenship in return for donations.

JILL LAWLESS
The Seattle Times does not append comment threads to stories from wire services such as the Associated Press, The New York Times, The Washington Post or Bloomberg News. Rather, we focus on discussions related to local stories by our own staff. You can read more about our community policies here.
Advertising