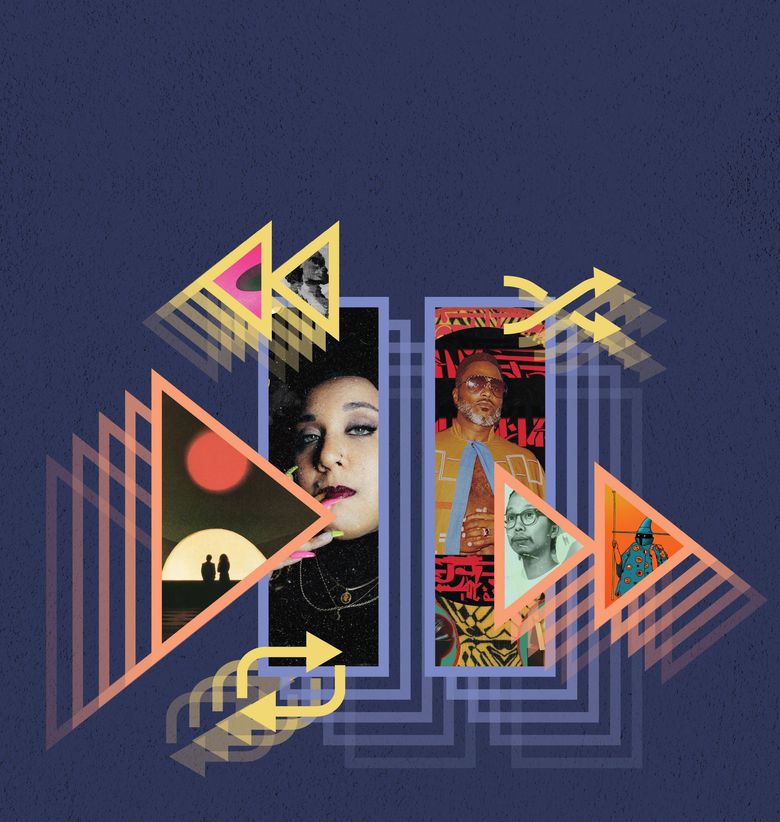 The best Seattle albums of 2020: Critics choose the top releases of the year

Well, we’ve almost made it. We’re about to throw this most exhausting and infuriating year down history’s garbage chute like a case of Champagne bottles after the New Year’s Eve party we don’t get to have.

Against the odds, Washington music didn’t stop. It reflected our anger and sadness, almost in real time. It helped us heal, gave us hope and took our minds off the headlines that grew gloomier by the hour.

In some ways, assigning numerical value to works of art, as year-end lists typically do, has never felt more absurd. But the point of the rolling experiment that is our annual critics’ poll has never been crowning victors or turning music into competition. It’s about highlighting a batch of Washington state releases that local music journalists, radio folks and other scene-watchers were collectively feeling. For every album on this list, there are a dozen more worth your attention. (You can find many of them in our critics’ individual ballots here.)

We asked 15 critics to submit their picks for the top 10 local albums of the year, ranked or unranked, using a sliding points scale to determine the results. It was especially close this year, with the top three or four albums separated by a hair after running the numbers through our sophisticated algorithm devised by a guy who got a C- in college algebra (hey, I still passed). Think of them as jewels in the crown that is Seattle music. Who wins? We the listeners.

21. Duende Libre, “The Dance She Spoke”
The seasoned jazz troupe with globe-trotting influences adds a stamp on its passport, incorporating West African rhythms and putting its twist on the region’s traditionals with an assist from local Senegalese percussion ace Thione Diop on several tunes.

Tie-19. Porter Ray, “When Words Dance”
For his first release since parting with Sub Pop — an intriguing match that never quite found its rhythm — the veteran emcee pulled from his vault this jazz-steeped set recorded just after completing his label debut. Porter Ray’s flow is like a butterfly in slow motion — appreciate the natural grace and beauty he makes look easy.

Tie-17. Kassa Overall, “I THINK I’M GOOD”
Speaking of hotshot jazz drummers, this Garfield-graduate-turned-in-demand-Brooklyn-musician further reconnected with his hometown this year, laying low in Seattle when the pandemic wiped out his gig calendar. Still, the drummer/rapper/producer’s dreamy, genre-defying explorations solidified his place as a thrilling player in modern jazz.

Tie-17. Nobi, “Fulminate”
The Tri-Cities native made good on his ambitious debut the rapper describes as a concept album centered on the perspective of a Black man in America. Over tracks often borrowing elements of jazz and electronic music, Nobi chops and dices weighty bars like a seasoned sous chef at dinner rush — meticulous, impassioned and unflinching as he fillets institutionalized racism on songs like “New Chains.”

16. SassyBlack, “Stuck” EP
The Seattle neo-soul staple drapes her jazzy-as-ever vocals over crisp, futuristic productions leaning on electro-funk and psychedelic synths. Fresh out of funks to give, SassyBlack triumphs over anxiety and buoyantly dismisses cop-calling “Karens” who value dogs above Black lives on her second EP of the year.

15. Samurai Del, “Till Death”
This indie electronic producer has steadily honed his craft over the past few years, culminating with this songs-oriented set dabbling in disco, future bass, trap, wavy electro-pop and more. Why pick a lane when you can glide across them this smoothly?

13. Deep Sea Diver, “Impossible Weight”
Jessica Dobson reminds us why she was once a guitar mercenary to the indie rock stars, jabbing, pirouetting and tumbling against booming melodies and glistening synths in her focused arrangements. But bigger things were always on the horizon and her songwriting vision has never been clearer than on the Seattle rock vets’ third album, which bagged KEXP’s people’s choice award for album of the year.

12. Left at London, “Transgender Street Legend Vol. 2” EP
There are no genre walls inside the house of Seattle’s wiliest popsmith. Hip-hop, emo, drum and bass and early ’00s pop maximalism are all referenced with the aplomb and earnestness of an artist sonically dancing like no one’s watching (though her massive social media following sure is). Seething Jenny Durkan rebuke “Do You See Us?” featuring breakout rapper Nobi was an anthem for 2020’s furious summer.

11. Stas THEE Boss, “Sang Stasia!” and “On the Quarner” EPs
Stas doesn’t so much rap over beats as the emcee/producer’s relaxed flows aerate her misty tracks with the feeling of a dream you’re certain is real. The former THEESatisfaction member might have a New York address now, but she’s still pushing the needle for Seattle hip-hop.

9. Naked Giants, “The Shadow”
After several years on the road, the Seattle garage faves reemerged tighter than ever, pushing into new terrain on their sophomore album. Dashes of U2, The Cure and even a stoner-rock headbanger are added without flattening the carbonated surf-punk bops they can rip with guitars behind their heads.

8. Perry Porter x OldMilk, “Grey”
Whether in the booth or on a canvas, Tacoma-area rapper/painter Perry Porter is one of the most consistent artists in the region. (Perhaps you saw his handiwork on Capitol Hill’s Black Lives Matter street mural or custom charity sneakers for Pete Carroll this year.) Here, the talented dual threat teams with up-and-coming producer OldMilk, leaning more heavily into his cerebral side as he skates lyrical circles around gliding house beats (“Move My Feet”) and the soulful pitter-patter of lead single “Custom.”

7. Black Ends, “Stay Evil” EP
The self-described “gunk-pop” trio was poised for a big year on the club circuit, but its second impressive EP kept the critical buzz going with principal songwriter Nicolle Swims emerging as the most distinct new voice in Seattle rock, blending wiry guitars and basement punk adventurousness with undeniable melodies and hints of experimental folk. The achingly tuneful “Low” cuts deep with a cracked and frayed heart-penetrability akin to a young Cobain. No one else really sounds like Black Ends and for a rock band in 2020, there might not be a higher compliment.

6. Chong the Nomad, “A Long Walk” EP
The idiosyncratic producer known for boiling quirky sounds into wildly original electronic music takes a sizable leap forward on her latest EP. Its whizzing and whirring compositions are more the work of a full-fledged songwriter than beatmaker, thanks in part to increased confidence in her vocals, and cameos from Seattle staples Hollis Wong-Wear, Ben Zaidi and famous fan-pal Ben Gibbard.

4. Blimes and Gab, “Talk About It”
Central District mic slayer Gifted Gab captured lightning when a quick-hit collaboration with Bay Area rapper Blimes went viral in 2018. The women with unimpeachable classicist flows kept that spark alive on their long-awaited duo album. Yes, the head-nodding, lyrical exhibitions are here and predictably flawless. But the emcees who only have an A-game also came out swinging with big hooks over feel-good, West Coast beats fit for club-night pre-funks and recuperative mornings after. With its late June drop as the summer protests boiled, there was a real possibility that after two years in the oven, their carefree LP could fall flat. Instead, its more summery jams reminded us it’s OK to roll the windows down and rap along offbeat. They made it OK to feel good again.

3. ILLFIGHTYOU, “ILLFIGHTYOUTOO”
Seven years since the kings of Tacoma unleashed their debut album, Washington’s preeminent rap hooligans reemerged to tag the enflamed dumpster that is 2020 with their marvelously raucous sophomore album — released on Halloween, no less. After scattered releases from members Khris P, Ugly Frank and Glenn over the years, the irreverent trio’s comeback throat punch hits like a house party where someone gets fairly seriously injured, yet no one seems concerned. “ILLFIGHTYOUTOO” is the TV smashed on the train tracks, the late-night scream in the middle of nowhere and the bathroom graffiti masterpiece all rolled into one.

2. Parisalexa, “2 Real”
The hometown energy has been high around this R&B phenom (who recently skipped to Portland) for years, topping this very poll with her first EPs in 2018. Since her impressive coming out party — which really began in her teens with a strong MoPOP Sound Off! showing — Parisalexa’s songwriting and ear for inescapable pop melodies has only strengthened, culminating on her self-assured full-length debut “2 Real.” The ’90s R&B swagger she’s long wielded merges with contemporary pop and hip-hop productions on “Bentley Truck” — an earwormy bounce-along with her ride-or-dies — and velvety single “Chocolate,” an uplifting celebration of her Blackness.

1. Shabazz Palaces, “The Don of Diamond Dreams”
Ishmael Butler is a Seattle original. The enigmatic rapper/producer has been at hip-hop’s vanguard since Digable Planets’ Grammy-winning heyday in the early ’90s. During the past decade, the onetime jazz-rap leader and, ahem, Seattle Times paperboy became an influential alt-rap figure, further expanding the art form through Shabazz Palaces’ polyrhythms and Afrofuturist touch. This spring’s Sub Pop-issued “The Don of Diamond Dreams” ranks among the best work of Butler’s illustrious career, showing he hasn’t stopped moving forward in three decades.

Butler makes literary sport of hip-hop’s braggadocio traditions, name-checking 1920s French actors and “catching mermaids without no hook” on the hypnotizing “Chocolate Souffle.” Elsewhere, the warped funk of “Fast Learner” is fit for an intergalactic space cruise or midnight drive through neon-lit streets. In a year when local hip-hop shined so brightly — and some in the mainstream might be catching up to his star-surfing ways — amid a tumultuous start of a new decade, there’s comfort knowing this Seattle visionary still carries a guiding torch.