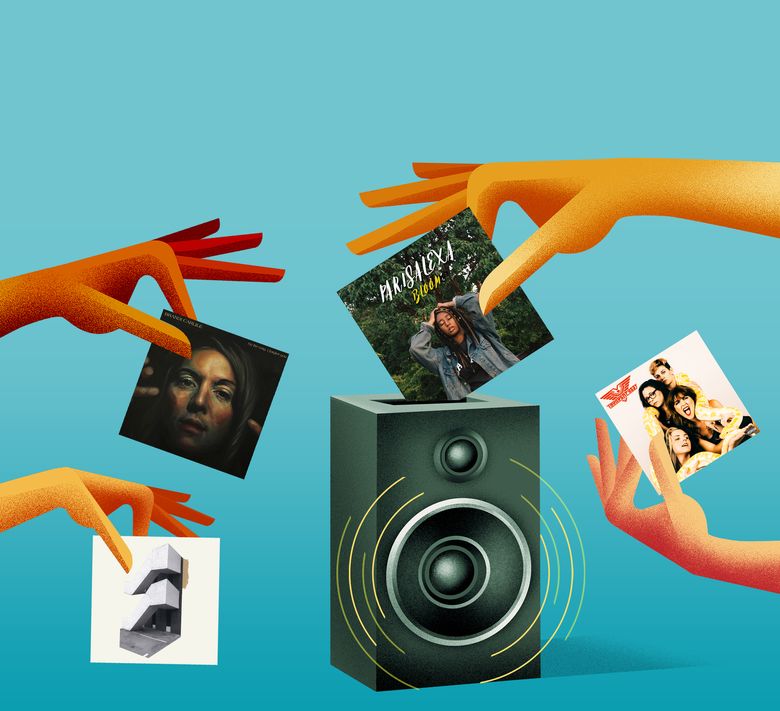 From Grammy-nominated vets to breakout up-and-comers, the top 20 albums highlight the breadth and depth of our local music scene. Sit back and enjoy the results of the only democratic process the Russians (probably) didn't meddle with.

“Best of” season is now officially upon us and in effort to make our year-end coverage a little more democratic, we’re pleased to introduce our inaugural Seattle Critics Poll (*working title) to determine the best local albums of the year.

Roughly 20 Seattle-area journalists, radio peeps and pundit types tracking Washington’s music scene submitted lists — ranked or unranked — of their top 10 local albums of 2018. Using a points system (higher ranking = more points), we tallied their ballots, which you can view here, to come up with the 20 best albums made by Washingtonians who generally reside in the state (or at least still feel connected to the local music community). Total number of votes and peak ranking were used for tiebreakers as needed.

Like most great ideas, this one is lifted from The Village Voice’s now-defunct Pazz & Jop poll — itself patterned after the late Jazz & Pop magazine’s annual roundup. Our top 20 albums highlight the breadth and depth of our local music scene, featuring impeccable releases from veteran folkies to R&B singers on the rise. So sit back and enjoy the results of the only democratic process the Russians (probably) didn’t meddle with.

Producer and occasional rapper Sax G comes through with a cool collection of head-nodding beats, inviting guests like Navvi’s Kristin Henry to handle most of the vocals. Incorporating elements of soul and jazz, Sax’s productions often feel more East Coast than West — especially on “The Last Outlaw/8d8 Posse,” a rugged beat that could’ve scored a season’s worth of “106 & Park” Freestyle Fridays. Still, the results are savory enough to transcend area codes. Honorable mention to strong releases from Terror/Cactus, Red Ribbon and Bear Axe that barely missed the cut.

It’s a little ironic that the biggest breakout album on this list also comes from the most famous artist. But our homegrown folk star surprised the music world notching six Grammy nominations — including one for album of the year, the most prestigious award — on the strength of her excellent new album, earning Carlile a new level of mainstream recognition. And rightfully so. From gleeful folk-country romper “Hold Out Your Hand” to the stunning strings-laced piano ballad “Party of One,” the Americana vet who’s had her share of commercial success is clearly at the top of her game.

Art often reflects life and few have held up the mirror as unflinchingly as Phil Elverum does on “Now Only,” the Anacortes songwriter’s second painfully vivid album since the death of his wife Geneviève Castrée. Over six expansive ruminations, the experimental folk singer (who married actress Michelle Williams and moved to Brooklyn this summer) contemplates posterity and lays bare his grief with a directness that puts a lump in your throat.

This versatile hip-hop duo have made a name for themselves with explosive live performances, but emcees Greg Cypher and Eff is H show their true range on the Keyboard Kid-produced “2.K.F.G.” One minute they’re kicking melodic hooks that could siphon Sol fans, while getting grimy with Nacho Picasso on the slithering “Risin’” the next. They have the bars to please purists, but Kung Foo Grip are neither boom-bap throwbacks nor cloud-rap play chasers — a group truly cruising in their own lane.

Veteran sideman Matt Batey took his sweet time (mainly for financial reasons) recording his solo project’s debut album with a rotating cast. Seven years in the making, all the wrinkles have been ironed out on this Barsuk-issued collection of airtight pop-rock tunes well worth the wait. While much of the music is blissfully upbeat, Batey’s lyrics shade darker, often touching on his anxiety issues with a self-effacing humor. The self-proclaimed “winning star champion of [expletive] up” definitely got this one right.

If American life circa 2018 is going to go down in an inferno of dumpster fire memes, at least we got a scathing new record from these Sub Pop greats to lampoon the whole damn mess. An acerbic-as-ever Mark Arm locks fearmongers, religious hypocrites and social-media culture in his crosshairs, issuing takedowns with his trademark sarcasm and dark humor over churning midtempo punk grooves. Brash and unfiltered, “Digital Garbage” is the cathartic middle finger we needed this year.

As vulnerable as any breakup album can get, this talented singer-songwriter wears her jealousy and insecurities on the same sleeve used to wipe away her tears. Ballen’s distinct nasally voice creeps, crawls, whispers and claws through a dozen poignant and pensive songs, including “Black Cloud” — the cascading centerpiece that rolls in like a coastal storm. A truly impressive debut album from a blossoming indie rocker who deserves your attention.

These gonzo garage rockers who have shredded Seattle stages the last few years come out blazing on their first album produced by local heavyweight Steve Fisk. Furious surf-punk riffs and frenzied solos fly around like bats in punk-house basement, courtesy of Grant Mullen — one of the best young guitarists in town. The savory pop-punk/power-pop melodies, handled by Mullen and bassist Gianni Aiello, and drummer Henry LaVallee’s steady pummel hold the trio’s warmly raw debut together.

Electro-soul singer Moni Tep steps out with this dreamy 10-song set that plays like an enveloping love meditation. Hypnotic, slow-rolling beats provide the perfect canvas for the Black Constellation affiliate’s swirling melodies that seemingly hang in midair. As soothing as a candlelight massage, Tep enchantingly layers her reverbed vocals on “Linked In” — an album highlight about the forces of attraction — before stacking them even higher on the sultry “Watching Planes.”

The playful Seattle punk faves get serious (well, sorta) on their third and finest full-length released through Kill Rock Stars this summer. Lead songwriter Rachel Ratner makes the workday life of an employed 30-something irresistibly fun to bitch about through razor-sharp punk ditties about indifference to Saturday night socializing or how birthdays blow. But this time around the trio balances tales of pizza theft (“O.P.P.”) with comments on the gender pay gap and our relationship with technology (“Giant Brain”) or the declining bee population (“Bees”) laced with occasional free-jazz freakouts from guest saxophonist Gabi Page-Fort.

The long-awaited debut album from these engine-revving rockers arrived this year in a cloud of exhaust, like a ’71 Camaro whipping circles around the International Fountain. From the opening strike of Whitney Petty’s guitar on opener “Speed Queen,” the quartet’s major-label-backed record oozes rock ‘n’ roll swagger — the kind that makes their “world domination endeavor” feel like the most important campaign of the decade (or at least second most important). Despite their well-earned rep as one of Seattle’s best live bands, Thunderpussy wasn’t content merely harnessing their recalcitrant stage show on record, beefing up songs like anthemic ballad “Torpedo Love” with soaring strings.

Local club favorites spin wiry bop-alongs and fuzzed-up riffs into a whirling post-punk tornado on their debut album “Amorfo.” As they do on stage, the trio swaps instruments and vocals (in both English and Spanish) with a serve-the-song liberty that still nets a cohesive record. Sociopolitical songs, including “Deja De Joder” — a call to treat refugees and immigrants with respect over frazzling guitars — slide in alongside more personal reflections like psych-punk screamer “I Try,” which Alaia D’Alessandro says touches on the “general bizarreness of being alive” through gritted teeth.

There was plenty of excitement when this project from two of Seattle’s most fearless innovators with proven chemistry was officially announced this summer, and the Sub Pop-issued collaboration between hip-hop mad scientist Ishmael Butler and producer extraordinaire Erik Blood did not disappoint. We have reason to believe that “1 Time Mirage” was delivered from a future Seattle rap fortress on Mars, from which the duo and other freethinking artists in their orbit — OCnotes and Marquetta Miller to name a few — disseminate their off-kilter strain of funky to the farthest corners of the galaxy.

Not entirely unlike another Seattle drummer-turned-frontman, Jay Clancy has a knack for setting spit-shined pop-rock melodies to roaring alt-rock guitars. But if we’re busting out ’90s Seattle references, Sloucher’s first real full-band effort is closer in spirit to the Posies, with Clancy’s softly lilting vocals breezing through loud-quiet passages, whether he’s singing about driving around in circles or wondering aloud if he’s wasting someone’s time, as on “Melodrama” — a track ending in a delightfully riff-heavy roll in the mud.

One of Seattle music’s biggest breaths of fresh air in 2018 came from this promising young beatmaker who hip-checked her way into the dude-dominated electronic scene with her coolly minimal “love memo” EP, which got a vinyl release this fall on Crane City Music. The real-life Alda Agustiano’s strain of hip-hop-informed dance music weaves eerie sounds through rippling sub-bass lines, with occasional tempo shifts keeping listeners on their toes during short-burst tracks. From the tasteful dubstep-y lurch of “for tonight” to the rapturous “chest pains,” the up-and-coming producer proves a master of subtle moods, gently shaking things up the second you’re too comfortable.

Moving on from the Maraqopa trilogy he recorded with the late Richard Swift, Damien Jurado delivered arguably the most exquisite album of his 20-plus-year career with “The Horizon Just Laughed.” Literary acoustic and piano numbers are gracefully brushed with elegant strings without feeling overdressed. Like the next artist on our list, Jurado recently split for Southern California, though his heart feels forever in Washington when he sings of “crossing over Wenatchee into outer space” on the pastoral “Dear Thomas Wolfe” or pledging his love more directly on the tender “The Last Great Washington State.”

After his 2016 breakthrough “Teens of Denial” catapulted Will Toledo from Bandcamp hero to one of indie rock’s leading young voices, revisiting an album he made on his laptop as a 19-year-old seemed like an odd move. It turned out to be the right one, as the garage-rock maestro embraced his perfectionist urges on a complete rerecording of “Twin Fantasy,” a now-expansive set revolving around a past relationship. Through Toledo’s signature wry wit and an almost stream-of-consciousness vulnerability at times, “Twin Fantasy” 2.0 rides the emotional roller coaster and occasional awkwardness of young love — unrequited or otherwise — armed with a refined vision and cacophony of guitars.

With her first full album under the Jenn Champion moniker, the veteran indie rocker formerly known as S and Jenn Ghetto executed 2018’s most irresistible left turn, trading emo-tinged guitar songs for unabashed synth-pop anthems with assists from producer SYML and instructional synthesizer videos on YouTube. Champion’s heart is heavy as ever, but her hands are in the air from opening tone-setter “O.M.G. (I’m All Over It)” through infectious ‘80s pop jam “Holding On.” You can practically see Champion’s breath over the icy grooves on tracks like “Coming for You” and the low-key funky “Mainline.” By the time the choreographed synths erupt like the Bellagio water fountain over a swelling house beat on “The Move,” it feels like a perfectly sullen celebration for an artist reinventing herself without visible growing pains.

Two years after a talented kid with a looping station turned heads at Sound Off!, R&B wunderkind Paris Alexa Williams proved ready for the spotlight this year, debuting with two impressive EPs that earned her more votes than any other act on our list. The now-20-year-old flashes a maturity and confidence — both vocally and conceptually — beyond her years on “Bloom.” The seven-track main course is about personal growth and self-love through romance narratives. Williams taps the ‘90s R&B she grew up on, brushing piano beats with her soulful mellifluousness on tracks like “Hole in the Ground” and “Dandelion.” The artist on the rise brings a more contemporary swagger to her following “FLEXA” EP, gracefully spreading her undeniable hooks over bass-heavy beats on “Ballin’ ” and “LV” — an earwormy humble flex about being proud of what you have. The scariest thing about Parisalexa’s breakout year is the fact that she’s still a developing her style, meaning the next few years could be even more fun.