Just when it looked like the Grammy’s nontelevised daytime ceremony, where most awards are doled out, would end with an 0-11 Washington shutout, Carlile won the best country song award with The Highwomen’s inclusivity anthem, “Crowded Table.”

“I am in complete shock,” an excited Carlile said, her glitchy audio feed a hallmark of the COVID-age awards ceremony. “And I’m so proud. … To everyone that voted for our band, we just wanted to see women in country music embraced, platformed and seen, and we’re seeing that more and more. … What a complete astounding honor. Oh my God!” 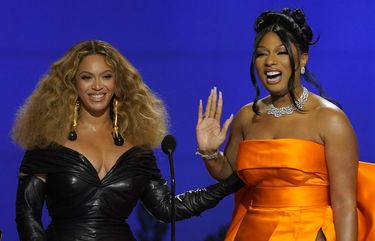 Carlile, who was nominated along with Natalie Hemby and Lori McKenna for the award, accepted on behalf of her country supergroup, whose members dominated the category for three of the five nominations.

While the daytime ceremony was a virtual affair, the prime-time show took place outside the Grammys’ usual home at Los Angeles’ Staples Center, with the audience mostly limited to nominees and their guests. The downsized fete, which host Trevor Noah billed as the year’s “biggest outdoor event … besides the storming of the Capitol,” featured a mix of taped and live performances, including Carlile’s tender tribute to the late great John Prine, who died from COVID-19 complications last year. Carlile’s wavering drawl slid into Prine’s “I Remember Everything” — the legendary songwriter’s final song, which earned two posthumous awards — like a pair of old boots.

“He is one of my great heroes,” Carlile said in a taped interview ahead of the show. “He’s certainly one of the greatest songwriters of all time. There’s so many of us that just wouldn’t, we wouldn’t write songs, and we wouldn’t know how if it weren’t for John.”

Earlier in the day, Carlile missed out on her first of two nominations, with some serious competition in a typically low-profile category, facing off against Billie Eilish and Taylor Swift in best song written for visual media. Eilish, last year’s big winner, nabbed the prize with “No Time To Die,” taken from the soundtrack of the Bond flick with the same name. Carlile also produced The Secret Sisters record that was nominated for best folk album.

Seattle quickly got off to an 0-2 start during the daytime Premiere Ceremony, which kicked off while many of the prime-time nominees were still finishing brunch. Progressive jazz guitarist Bill Frisell, who recently split to New York after roughly 25 years in Seattle, missed out on best contemporary instrumental album for his trio album with harmonica player Grégoire Maret and pianist Romain Collin.

The virtual nature of the “Zoom Grammys,” as they jokingly called it, wouldn’t prevent the tightknit crew from making the most of the experience. The group, which also includes Erin Bentlage, walked their own “little mini red carpet” in custom outfits designed by Seattle’s Deyonté Weather and replicated as much of the Grammy festivities as possible in a rented “Grammy bungalow” in Los Angeles, where Gazarek and Bentlage are based. “We agreed as an ensemble that we didn’t want our first nomination to feel any different than it would have felt had there been an in-person Grammys,” said Gazarek, the only member who’s been previously nominated.

From the sounds of it, mission accomplished.

“Oh, man,” Kendrick said, laughing, as the televised ceremony began. “You know how when you have Christmas and you get up, open all your presents, you eat and then you spend time with your family, and then you crash? I was just at the crashing thing. [Laughs.] It’s been really cool, but it’s a lot emotionally.”

Of the awards Washington artists were nominated for, only Brandy Clark had a shot in one of the televised categories, her double breakup album “Your Life is a Record” up for best country album, which went to country star Miranda Lambert. The singer-songwriter who grew up in Morton, Lewis County, was also nominated for best country solo performance.

Singer-songwriter Courtney Marie Andrews’ heartachingly austere breakup album, “Old Flowers,” was up for best Americana album — the nomination a high-water mark in a career that took off during her seven years in Washington. While the first-time nominee would have liked to take in the glitzy L.A. experience Music’s Biggest Night normally entails, she celebrated Sunday night with a few friends and a bonfire outside her Nashville, Tennessee home.

“I did get a little dressed up,” Andrews said Sunday. “I just got some vintage store clothes that I’m wearing and I put on some makeup and tried to make it a little bit of a fun event in the household.”

Despite the early shutout, Seattle still got a little shine during the streaming Premiere Ceremony. Seattle-born jazz drummer, rapper and producer Kassa Overall gave a chilling taped performance as part of Terri Lyne Carrington’s Social Science band, which was up for best jazz instrumental album. Overall’s image spliced with his bandmates and an American flag, the Brooklyn-based genre-blurring musician delivered his poignantly brooding raps from “Trapped in an American Dream” — the haunting tone-setter from the group’s “Waiting Game” album, which largely addresses racism in America.

Your guide to the 2021 Grammy Awards