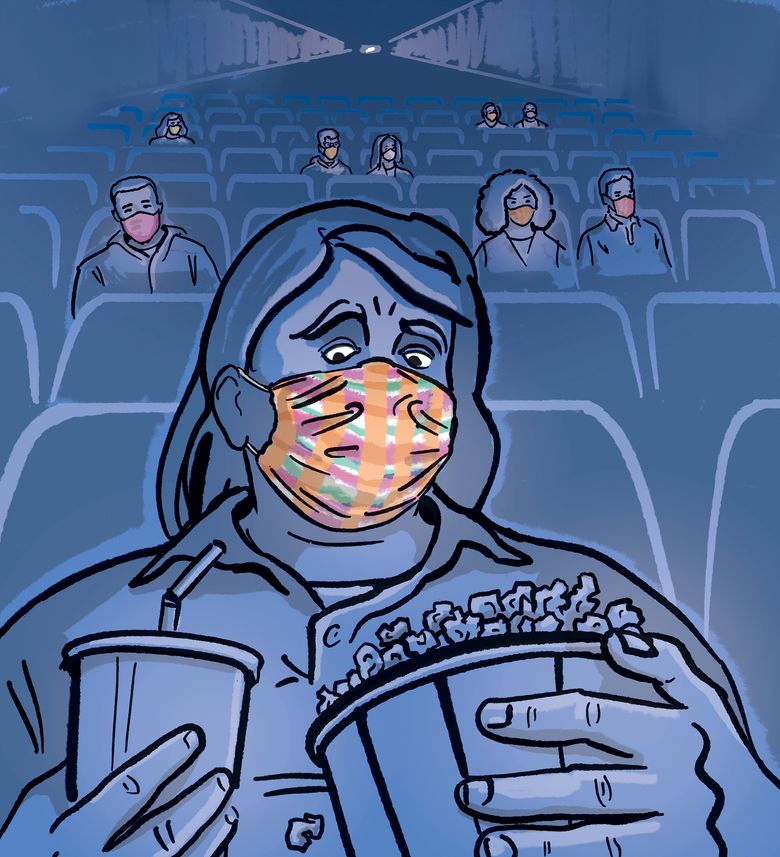 When I was a kid, going out to the movies was a treat — and, until cinema doors slammed shut a few months ago, I still thought it was. Yes, moviegoers with cellphones often were doing their best to ruin the experience for others, but I still loved everything about it: the enormous screen, the enveloping darkness, the buttery aroma of fresh popcorn, the laughter and gasps that reminded me we were all experiencing something together. And, as the movie critic for this paper since 2001, I went a lot: visiting movie theaters two or three times a week, sometimes more.

Currently, no one knows exactly when movie theaters might reopen. (Under the governor’s four-phrase plan, the earliest possible date when such gathering would be allowed in Washington state would be June 22. The major national cinema chains — AMC Theatres, Cinemark Theatres, Regal Cinemas — have indicated they will not reopen, even in areas where it’s allowed, until June or July at the earliest.) But we are beginning to get a sense of what that might look like: quite possibly (at least in the beginning), sparsely populated theaters with widely spaced patrons, masked and gloved staff behind Plexiglas barriers, a scent of disinfectant in the air.

And all of that will be important and necessary — staff members and moviegoers need to feel and be safe. But how many of us will be eager to return, under such conditions? After months of not gathering in groups and watching movies solely at home, will it feel odd to return to the cinemas? Will some people be scared to return, and will others find they just didn’t miss going out to the movies?

A poll taken in early May and published in The Hollywood Reporter showed only 7% of respondents said they were “very likely” to go to a movie in a theater within a month of reopening. David McRae, owner of Ark Lodge Cinemas in Columbia City and a lifelong veteran of the movie exhibition business, expressed similar caution.

“I think they’d like to, but I don’t think they will,” he said, asked if he thought moviegoers would return to cinemas soon. He hopes to reopen, “under whatever conditions we feel that we can safely follow along with, maybe in July,” but isn’t certain he can do so.

He’s concerned about the spread of the virus, but is worried about how his small business can comply. For example, if masks are required, “How do we deal with it if someone comes in the theater and says, ‘I’m not wearing a mask’? How do they wear a mask and eat popcorn?”

Like many in the industry, he wonders how a partial reopening, with only a fraction of seats sold, could make financial sense. And, even assuming the previous concerns get figured out, he’s not sure what movies might be available to show.

Since the pandemic began and theaters closed in March, the major studios have been busily moving their big summer movies out of harm’s way. Many have been shuffled to next year, some to late 2020, leaving the summer season as mostly a wasteland for tentpole movies. Other than a few family films, only one major movie is still set to open in theaters in July: Christopher Nolan’s “Tenet,” still at the time of this writing scheduled to open July 17. “Wonder Woman 1984,” originally scheduled for May, will follow in an otherwise spartan August. Presumably these are the movies the major chains are banking on, assuming reopening can occur safely by midsummer.

And other potential summer big-studio films are being sent to on-demand streaming — to the dismay of theater owners. Last month, entertainment trade publications fell all over a feud between Universal Studios, which skipped the theatrical run of its spring family-film tentpole “Trolls World Tour” and went straight to video on demand (where it earned nearly $100 million), and AMC, the largest multiplex chain in the country, which vowed to never again book a Universal film. Tempers seem to have cooled, and Universal has since said, as reported by Deadline, .com, that the company “still believes in the theatrical experience.”

Many are watching curiously to see what happens later this month, when the comedy “The High Note,” starring Tracee Ellis Ross and Dakota Johnson and originally scheduled to open theatrically in May, opens as video on demand (VOD). Family films are one thing; Saturday night movie house date-night fare is another. What we haven’t yet seen is any announcement of an action movie going VOD; it’s hard to imagine a superhero movie, or a “Fast and Furious” installment, making its debut on the small screen.

But a dearth of franchise movies in theaters might be good news for art house films, said Beth Barrett, artistic director of SIFF. Generally, films that debut during the annual Seattle International Film Festival populate art house screens around town for months afterward. This year, with SIFF canceled and theaters closed for several months, there’ll be “a giant backlog of great films,” Barrett said. “It’s going to be a very interesting landscape, especially in terms of independent and art house films that may be looking for a toehold against a lot of those bigger blockbuster films. It’s an advantage for the art houses in Seattle — some of that content that so desperately wants to get out there will be able to find a home.”

Barrett also noted that movie houses, unlike some other arts organizations such as live theater, can ramp up very quickly. “Once we know that it’s safe for us to do so, and we’ve got measures in place to protect audience and staff, there will be a glut of films.” She said SIFF is considering expanding the number of screenings in a day, to allow for lesser capacity.

“The landscape will be different and we’ll have to figure out how to adapt,” said Barrett’s colleague, SIFF executive director Andrew Haines. “We need to be good social citizens and be socially responsive, and think about what that means, whether people feel comfortable coming out in a crowded theater.”

Ark Lodge’s McRae points to another time when a pandemic closed movie theaters: 1918, when the flu ravaged the country and most cinemas — then, as now, a popular form of entertainment — closed for two to six months. When movies reopened, the business changed: Led by industry mogul Adolph Zukor, the Hollywood studio system was established, taking control of exhibition from independent mom-and-pop theaters, like McRae’s. Though broken up in 1948 in an antitrust decision, that system continues to impact cinema today.

Will the current closures likewise change moviegoing as we know it? (One tantalizing rumor making the rounds earlier this month: that Amazon might buy a coronavirus-weakened AMC.) Will the business undergo a dramatic change, relying more on stream-at-home options? I, and all of us who believe there’s something special about gathering in the dark to see a movie larger than life, hope not, but none of us know for sure. And I don’t know when I’ll go to a theater again without worry — but I do know, someday, I’ll go. Because the movie theater experience is, quite literally, too big — and too precious — to lose.