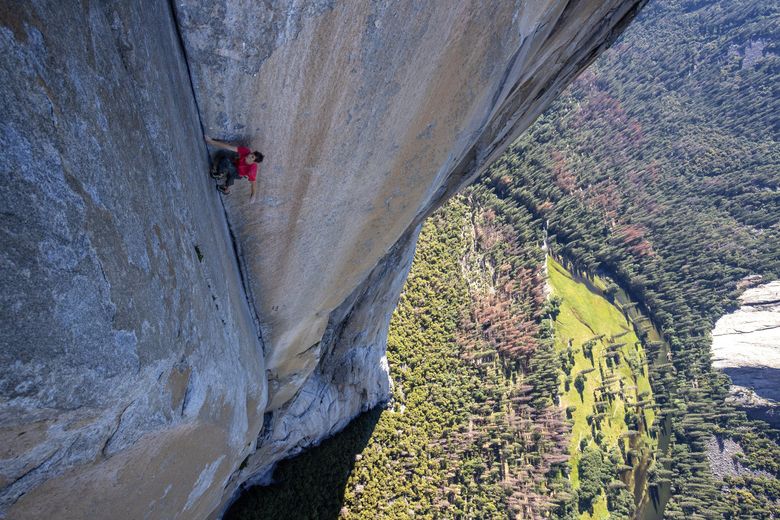 Climber Alex Honnold gave the filmmakers following his journey one rule: They couldn't ask when he planned to climb. Honnold's historic first ascent of El Capitan without safety gear was documented in the film "Free Solo," playing now in Seattle movie theaters.

Climber Alex Honnold stood comfortably on a ledge on the face of El Capitan, some 2,500 feet above the valley floor of Yosemite National Park — and without a rope. He shouted up to the videographers dangling about 150 feet above, hoping he could steal a few sips of water from inside backpacks they’d stashed.

Moments before, Honnold had landed a perfect kick into the stone wall, stuck his foot to a nubbin of granite protruding from the wall, and then pulled himself out of a section called the boulder problem, the most worrisome and technical portion of the climb — the crux, in climber speak.

The videographers, also professional climbers, hadn’t left water. No matter, Honnold was revved up — in his words, “stoked” but “trying to stay composed.”

The stretch of climbing above, called the enduro corner, a vertical crack running at the seam of two inset edges of rock, represented the final challenge of his ascent of the granite monolith.

With shoes laced tight, he switched to a rehearsed focus. He wanted to “use everything left in the tank and just crush it.”

Honnold would scale the corner in less than 10 minutes. In total, his climb of the 3,000-foot granite face took less than four hours. Climbers using ropes, if they’re among the handful talented enough to attempt the Freerider route, often take multiple days. El Capitan had never been scaled without safety gear.

As Honnold trained for his historic climb, a documentary film crew of world-class climbers and filmmakers, including photographer, director and producer Jimmy Chin, and his wife, producer and director Elizabeth Chai Vasarhelyi, would capture the process for the documentary film “Free Solo.”

Honnold and Vasarhelyi visited Seattle last week to promote the film. Chin shared his experience, briefly, by phone. Years ago, Honnold met his girlfriend, Sanni McCandless, a main character in the film, during the Seattle stop of a book tour.

When filmmakers Chin and Vasarhelyi began working on the film, they set out to capture Honnold’s physical accomplishment, but also the personality that compelled it. Honnold was a loner as a child, they learned. He intentionally and methodically honed skills that come naturally to some, like public speaking or giving out hugs, Vasarhelyi said.

Before his attempt on El Capitan, Honnold memorized hundreds, if not thousands, of moves as if it were a choreographed dance with a towering piece of stone.

His feat would require the filmmakers to execute a disciplined plan of their own to effectively capture his blitzkrieg ascent. They needed to install remote cameras, rig ropes for their access to shooting vantages and to coordinate seamlessly as he scaled the tower.

Honnold’s one rule for the filmmakers: They could never ask when he would climb. When he was ready, they would have to be, too.

For Honnold, his ambition’s risk was a fall to his death. For Chin, who was shooting while dangling from the wall, he worried about missing the crucial shot, or worse, seeing his close friend fall through his frame. For Vasarhelyi, watching from the valley floor, the tension was palpable.

“In the heat of the moment, it’s hard to justify what you’re doing. There’s a panic,” she said.

This story was based on interviews with Alex Honnold, Jimmy Chin and Elizabeth Chai Vasarhelyi, as well as the documentary film "Free Solo."

The last hard piece of climbing for Honnold, the enduro corner, marked the denouement of the experience — a final performance not just by Honnold, but also the filmmakers cataloging his ascent into history.
___

Tethered to a climbing anchor he’d built next to the enduro corner, Jimmy Chin sat in his harness and readied himself. He’d been hanging on the wall for about an hour, smelling pine wafted on a light breeze.

Chin was carrying food, water, his headlamp and a still camera and video camera attached together with a screw mount. He was shooting for the film, and a National Geographic assignment, too — double the pressure.

The crew had rigged thousands of feet of rope so Chin and other professional climbers could safely access and document Honnold’s journey. Coils hung at Chin’s side. He had to keep the rope, and his feet, from dangling into the shot.

From the meadow below El Capitan thousands of feet away, Vasarhelyi watched the scene play out on two monitors, about 10 inches wide, as they displayed a feed from the long lens trained on Honnold and Chin.

About a dozen people had been in and out of the meadow, but it was a quiet morning, the atmosphere hushed by the gravity of the moment.

Vasarhelyi had been texting progress reports — “trying to be impartial, sportscaster-y” — all morning with Sanni McCandless, Honnold’s girlfriend. “It pained me to feel what she was probably feeling,” Vasarhelyi said later.

These had been some of the longest hours of Vasarhelyi’s life. Her eyes continued to play tricks on her. Suddenly she wouldn’t be able to spot Honnold.

“Oh, where did he go?” she’d think, before his figure would reappear in the frame. She fought against brewing excitement.

From the meadow, the boxy angle of the enduro corner disappeared with distance, becoming just another line on the rock face. As Honnold began to climb, she could see his tiny figure, less than a half-inch high on the monitors, creeping up.

With his back to Chin’s camera, Honnold stuck his hands and fingers into the corner’s crack, contorting them into shapes and sizes that would hold his weight as he shuffled his feet up the granite. The presence of Chin and another cameraman shooting from above melted from his mind.

With ropes, climbers can take half an hour or more to scale the corner. It’s long enough to be considered two pitches, or rope-lengths, of climbing. Without a rope, Honnold only had one location where he could position his body in a stance that allowed him to fully rest his arms.

As Honnold ascended, Chin let “autopilot,” take over, looking for leading lines to draw future viewers’ eyes through the frame. He wanted to show the distant ground and the exposure, the expanse of air beneath Honnold’s shoes.

“Jimmy, get the shot. Don’t mess up,” Vasarhelyi thought to herself. She knew he would. They’d practiced so many times.

Midway up the wall, Honnold came to the toughest section of climbing, where he was forced to rely on just a few fingers to grasp shallow “pin scar” holds, remnants from the days when climbers would jam metal pitons into the rock to aid their ascent. To keep his feet on the rock, he had to rely on only the edges of his shoes.

Chin felt relief as Honnold navigated the section. Then, he watched his friend “just romping up the thing.”

After Honnold finished the corner, and a traverse, Chin hastily broke down the climbing anchor.

Honnold was cruising and Chin had to race to the top for the summit shot. That meant that he had to ascend a series of fixed ropes hanging down, using a device called a jumar to mechanically pull himself up rope, or jug, in climber speak. At each anchor point above, Chin would need to transfer his gear to a new section of rope, taking care to keep himself safely attached.

A few rope lengths up, Chin saw Honnold coming up by his side.

“Give me 60 seconds,” Chin said, pleading for a head start.

Honnold looked at his phone, and realized he could top out in under four hours.

The two friends’ paths diverged, and soon they could not see each other. Honnold could hear Chin jangling up the mountain, with his rack of climbing gear bouncing at his hips. Occasionally, Honnold voiced a playful bird call, so Chin could keep track of his progress.

From the meadow, Vasarhelyi watched as her husband hurried up the ropes.

“Alex, I’m going to kill you if Jimmy has a heart attack,” she thought.

“I’m done,” she told a climber and camera operator shooting with her at the base.

We are never doing anything like this again, they agreed.
___

Chin got the shot. Honnold etched his name deeper into rock-climbing history. The two embraced atop El Capitan.

The movie has received Oscar buzz.

“It’s always been the same thing. It’s always the kid who was too scared to talk to somebody else, to ask them to be his partner, so he goes out and climbs by himself,” Vasarhelyi said about the film and its purpose. “I feel like everyone has that fear.”

After years climbing the same stretch of rock over and over, Honnold’s vision — their vision — it all came together.

“I think it was an interesting thing that happened for Alex during the making of the film,” Vasarhelyi said. “It wasn’t so solo, right?”