Before we all get too caught up in holiday cheer and movies in which people gather around a table and beam at each other, let’s take a look at something not so pretty: bad acting. It’s on my mind because the very funny David Schmader, the Seattle writer and performer who knows more about “Showgirls” than anyone in the world, is hosting a film series this month called “Almost Human: Madonna on Film,” a series that will examine “how the world’s greatest pop star became the world’s worst actress.” (Central Cinema, starting Dec. 7.) He won’t get any argument from me, or from anyone else who’s seen “Swept Away,” and heard Madonna intone, without inflection, the line, “I love you more than life itself. My husband’s coming.”
While Madonna may well be in a class by herself (oh no, now I’m thinking about “The Next Best Thing” now! I can hear her careful enunciation! It hurts!), bad movie acting is more common than it should be, and I’ve seen more than my share this year. Sometimes it’s a good actor giving a bad performance, as Amy Adams often does in “Julie & Julia.” (Not Amy’s fault; director Nora Ephron is clearly trying to get her to be Meg Ryan, something not even Meg Ryan can always pull off.) Sometimes it’s due to inexperience, like some of those kids in “Fame,” trying a little too hard to make their eyes shine extra-bright. Sometimes it’s a performer whose skills are obviously limited, like Megan Fox in “Jennifer’s Body” (hmmm, how could she possibly have gotten so famous?) or Larry David in “Whatever Works” (he’s doing a weird, bleating version of Woody Allen, who is himself a limited actor but is at least Woody Allen and not an imitation). And sometimes, it’s hard to put your finger on — is Robert Pattinson in “New Moon” looking nauseated for a reason (he’s sickened by his blood lust for Bella? he ate a bad shrimp?), or is that just his default expression?
Click here for Schmader’s excellent trailer for “Almost Human” (sorry, can’t embed). And tell me: what’s the worst performance you’ve seen this year? 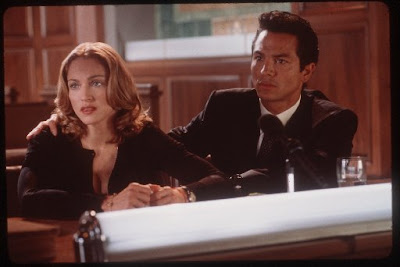 Stop her before she acts again: Madonna in “The Next Best Thing.”