To illustrate the effects of a deadly Arctic blast that had pummeled much of the United States this week, leaving millions of people shivering and in the dark, Trevor Noah of “The Daily Show” homed in on the plight of a particularly well-known resident of Houston.

“One poor Texan,” Noah noted during his monologue on Thursday, “had to travel 800 miles just to get heat, water and electricity.”

Of course, the late-night comic was referring to Sen. Ted Cruz, R-Texas, who earlier in the day confirmed that he had abandoned the freezing temperatures in Texas — where sustained power outages have left at least 30 people dead — for a tropical vacation in Cancún with his family.

As Cruz would quickly learn on Thursday, his trip to the Yucatán would not just make him look bad. It would, within a matter of hours, cast him as the object of many Texans’ ire — and the butt of many a joke on late-night TV and around the internet.

With reports of Texans having to boil snow just to be able to flush the toilet or burning furniture to stay warm, several late-night hosts and cable news pundits highlighted the cruel discrepancies between “the world’s shortest spring break” and the reality for many of his constituents. 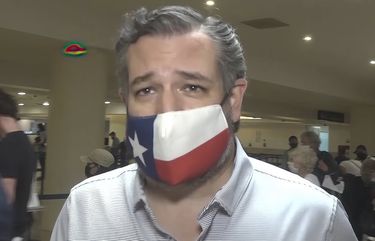 One night in Cancún: Ted Cruz’s disastrous decision to go on vacation during Texas storm crisis

“I get that Ted Cruz is tired. The man deserves a break after trying to overthrow the government, but this is not the time, Ted,” Noah quipped, hinting at Cruz’s support for President Donald Trump’s claims of election fraud that fed into the Jan. 6 riot at the U.S. Capitol. But “when your constituents said they need clean water, they didn’t mean go find a wet T-shirt contest in Cancún.”

On ABC, Jimmy Kimmel called Cruz “a snake on a plane,” highlighting the senator’s past support for Trump’s aggressive security measures on the U.S.-Mexico border.

“Where was Mr. Texas while his constituents are suffering?” the ABC host asked. “Well, there he is on a plane. … Ironically, to the very place he tried to build a wall around.”

Cruz, whose home had reportedly been without electricity but still had gas, called the trip “a mistake” and expressed regret for getting on the plane in the first place.

“With school cancelled for the week, our girls asked to take a trip with friends,” he wrote in a statement Thursday. “Wanting to be a good dad, I flew down with them last night and am flying back this afternoon.”

But even that explanation drew ridicule, with many commentators pointing out both his itinerary and luggage seemed to indicate that a return trip on Thursday had not been part of the original plan. As first reported by Skift — and later confirmed by Cruz — the senator had initially been set to stay in Cancún for another two days.

“I guess we’re supposed to believe he was just chaperoning his wife and kids to Mexico and was planning to come back the next day all along,” Kimmel said, “with a carry-on bag stuffed like a piñata.”

Throughout Thursday, each new development in the saga prompted a fresh set of derision.

After The New York Times reported on messages sent by Cruz’s wife to a group chat for other parents, in which she invited other families to join the Cancún trip, media figures on Twitter collectively marveled that a neighbor had leaked the texts.

When journalist Michael Hardy captured a photo of a small white dog still inside the Cruz home on Thursday afternoon, critics reveled in the fact that the senator had reportedly left his poodle behind — and in the pet’s too-good-to-be-true name: Snowflake.

And many commentators also cited Cruz’s history of pointing out hypocrisy in other officials who took beach vacations during moments of crisis, noting that the Texas senator had essentially made the same meme-worthy mistake himself.

Cruz did find a safe haven on Fox News on Thursday evening, where host Sean Hannity praised the senator for coordinating preemptive efforts in the lead-up to the winter storm and later attending to his daughters on their Cancún vacation.

“You made the right call coming back. You also can be a father. There is also something called technology,” Hannity said. “I think there is a lot of sanctimony and politics being played in this.”

But on more liberal TV networks, other pundits were quick to point out how he could have been aiding Texans in the time he spent jetting off to Cancún.

“From Ted Cruz’s perspective, what exactly is the big deal?” asked MSNBC host Chris Hayes. “There are a million things a senator could do in a middle of a disaster.”

Besides liaising between government agencies, ramping up constituent services and highlighting problems to federal officials, Hayes said Cruz could have at least knocked on doors to check on neighbors. But instead, the senator “basically sees his job as being a guy who records a podcast, goes on Fox News and tweets snarky jokes.”

Kimmel, meanwhile, lamented that the nonstop headlines about Cruz’s vacation had detracted from another noteworthy voyage.